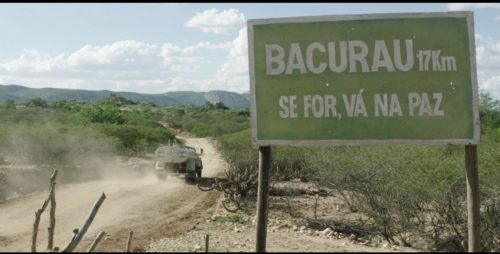 The film takes places in the fictional and titular Brazilian town of Bacurau. Although a poor place, this society inhabits a gorgeous area and appears like something out of a tourist brochure deep in Brazil. In this socialist paradise, everyone equally contributes to the best of their abilities and the community celebrates all body types, heavily relying on prostitution. After the death of its 94-year-old matriarch Carmelita, a corrupt politician Tony Jr. (Thardelly Lima) tries to disrupt the community and a rift amongst the elders occurs, especially with the only doctor Domingas (Sônia Braga), who also oversees the local thriving sex market. After a few days, strange situations seem to be reoccurring with the village vanishing from most maps and UFO-shaped drones flying overhead while a gun-nut “German” Michael (Udo Kier) is leading a guilt-free hunting expedition to kill residents of “Bacurau.” Can the community come together or are they doomed to disappear altogether? 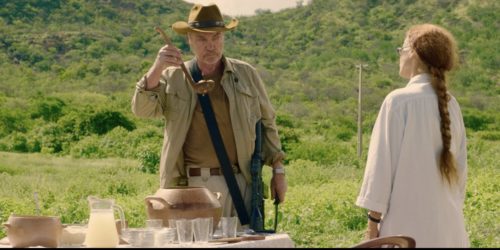 “Bacurau” might be best described as a modern wild western destined to be an instant cult classic. Imagine Alejandro Jodorowsky’s “El Topo” meets “Repo Man” with the oomph of a Sergio Leone film. This brilliant, batshit crazy film teeters between multiple genres and creates an unconventional, unique experience. The powerful political filmmaking of Kleber Mendonça Filho fantastically fuses together an exceptionally eccentric experience to create over two hours of amazing entertainment. Beautifully blurring the lines, “Bacurau” comes across with a natural narrative despite not having a straightforward storyline.

The radical shift from the first half to the second half might be off-putting for some, but the payoff is well worth it once Udo Kier arrives on the screen. The cult classic icon portrays an American in the movie, but is hilariously mocked by some of his guests for possessing a thick German accent. His sales pitch for the most dangerous game, hunting humans, is interesting on its own, but Kier kills it both literally and figuratively. Kier’s kinetic, hypnotic performance punches you with every scene shocking you all the way to the climax. Once again, Kier proves to be an undervalued asset and an amazing addition. 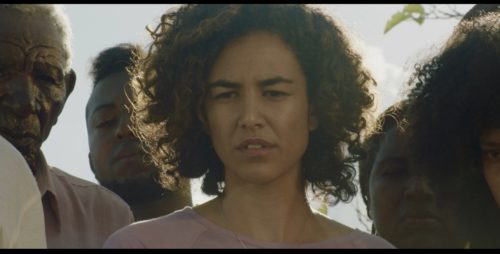 The clumsy, odd unorthodox storytelling packs in a lot of ideas, characters, and music, but overall the surprising stimulation will satisfy filmgoers wanting a distinct, memorable movie to enjoy. Whatever weird whacky direction you think the film is heading, boom it takes a hard turn in another direction. The film fantastically keeps you guessing so it should be no surprise why it won the Jury Prize at last year’s Cannes Film Festival and was also nominated for the Palme d’Or. “Bacurau” is the next midnight movie and cult classic worth discovering!