There’s nothing like nostalgia. It’s such a fun feeling when you can look back at a familiar series or movie, it’s like being transported to a different time. When I was just four apples high, I used to love watching the old Batman series from 1966 in syndication. Adam West and Burt Ward were the only Bat-men I know at the time, this was before Christian Bale and to a lesser extent Michael Keaton donned the cowl. Their series was pure campy fun, and Julie Newmar was awesome. 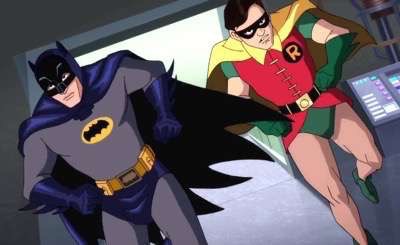 Now, everyone can look back at the 1966 version of Batman in Batman: Return of the Caped Crusaders! It’s an all new animated series featuring the original voice actors from the 1966 series. Holy Nostalgia trip Batman! 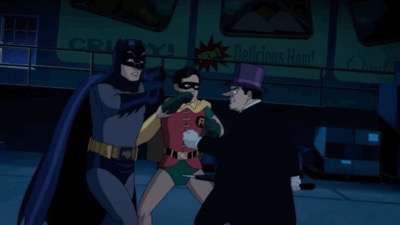 The animated version is pitch perfect and brings all the goofy camp to this animated adventure. The evil villains plot to get Batman (Adam West) out of the way to take over the city and grab the most priceless artifacts in Gotham. Robin (Burt Ward) must work with an unlikely group of allies to stop the dastardly scheme.

If you ever watched the 1966 Batman series, then this original film will take you back, it’s not The Dark Knight you’re watching but a very fun and unique way of remembering the past. This is very much the campy cornball comic book series that you remember and the tone is pitch perfect. Every Bif, Bam, and Pow is rightfully in its place!

The innocence of the film is a welcome breath of fresh air in the superhero genre, one that has been getting darker and darker as of late. Let’s just say, Iron Man won’t be fighting Captain America in this film, it has a moral lesson and even recreates the old visual style of the series. 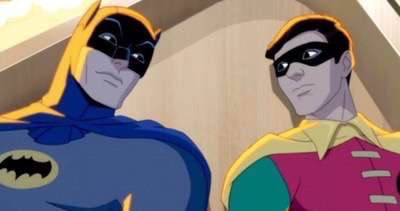 The colors as well accentuate the original series in a wonderful homage, with bright pops here and there. It really adds a lot to the overall film. The writing as well seems like it could have been an episode that was lost over time. I’m not going to spoil some of the plot twists for you, but it’s really in line with what the series is known for and fans will appreciate it. 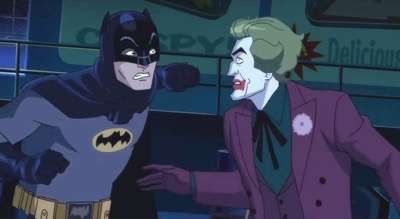 The voice actors were awesome, original cast members Adam West and Burt Ward are great and it was a thrill to hear Julie Newmar as Catwoman once again. I mean come on, she’s the best Catwoman out of the three who played the part in the original series. In terms of the actors who took over roles from actors who are no longer with us, everyone does a great job, however William Salyers as the Penguin did such a good job, I had to go back and double check that Burgess Meredith wasn’t still around or a long lost relative took his place. He is that good. 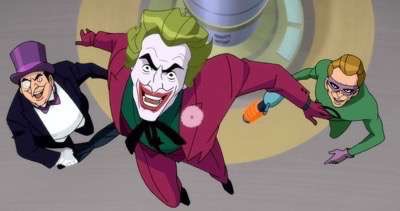 Overall, I loved this film. It was a fun and different way to honor the 1966 series and even bring back some of the classic actors. I really appreciated the attention to detail and care that went into the film, the little plot touches were on point and were very well done. Kudos to all involved, I highly recommend checking this out for hard core and casual fans of the original series alike! 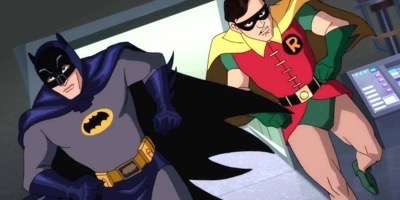 Batman: Return Of The Caped Crusaders is out now on Blu-ray!