There was an influx of body switching, body changing films in the early 1990’s. You can Like Father, Like Son, Vice Versa, and the only one to really stand the test of time, Big. I’m not sure what it is with Hollywood and trying to remake the same movie over and over, but it happens more often than it should. The movie going public is lucky if any of them are even watchable let alone stand the test of time. 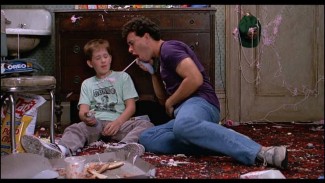 I’m thankful then that Big is one such film. Josh Baskin (David Moscow) is your typical kid. He doesn’t fit in, he’s too short to be with the cool kids, if it wasn’t for his best friend, Billy (Jared Rushton) he would be completely left out. When his parents take him to a pop up carnival, Josh sees a girl he likes and tries to talk to her. When he realizes that she’s with the popular jock and he can’t even ride the ferris wheel, Josh runs off on his own. He sees a fortune telling machine and makes a wish. He wants to be “big.”

In the morning to his shock and surprise, he does just that. He’s a full grown adult man, now played by Tom Hanks. His mother thinks the full grown Josh has kidnapped her son, and so Josh runs away. Billy helps Josh gets a hotel room in the city and they go out in search of the fortune telling machine that is now missing. 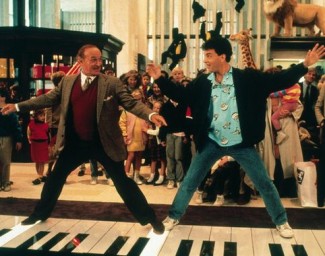 What’s a full grown adult to do? Get a job. Josh applies for a job at a toy factory doing simple data entry and it’s there that he meets, Susan (Elizabeth Perkins) and Mr. MacMillan (Robert Loggia). At a random encounter at a toy store, Mr. Macmillan admires his childlike qualities and promotes him. At the same time, Susan starts to see the unique qualities Josh has and begins to fall in love with him.

Still, Josh starts to realize that he misses his family and his old life and needs to be a kid again. 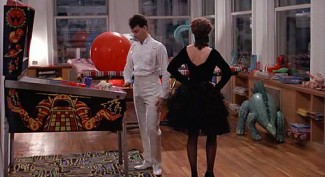 There are some movies that just stand the test of time, and thanks to the work of it’s leads, Big is one of those film. Elizabeth Perkins is perfect as Susan. She grounds the film and allows us as the viewer to experience Joshes eccentricities. She also adds so many levels to her character.

Tom Hanks is actually very good in the title role. I’m not a huge fan of his current roles but he did such a good job back in the day, and Big was one of the bright spots on his film resume. 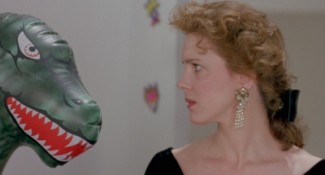 Big comes to life on a stellar Blu-ray reissue. The picture quality looks great and when you see a film again in this condition it’s like seeing it for the first time. The colors pop better than they ever have and the difference between the toy store and the seedy hotel really are prominent.

Besides the film itself, one of the best things about Big is the special features. The main one is that there are two cuts of the film, a theatrical cut and an extended version. The extended version includes over 20 minutes of additional scenes. 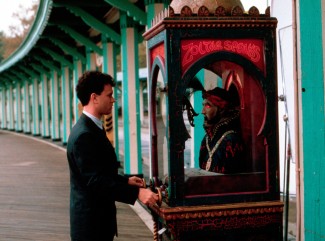 Also on this set is “Big Brainstorming” which is an Audio Documentary by Gary Ross and Anne Spielberg. It begins as a regular commentary track but turns into a look at the writing of the film. It even includes audio clips of the writers figuring out the script before it was written. That’s pretty incredible. 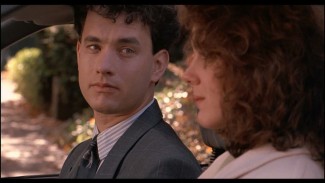 There are deleted scenes with optional introductions from Penny Marshall. There are several featurette’s including Big Beginnings which talks about the origins of the movie. There is Chemistry of a Classic which has interviews with the cast and crew, Hollywood Backstory which talks about the film and a look at the Big premiere.

Plus, the packaging includes a keyboard that actually plays music.

Overall, Big proves once again that its a Hollywood classic and stands the test of time. It’s an awesome film that doesn’t miss a beat and is still enjoyed by kids of all ages. This is one reissue you need to pick up.

Big is out now on Blu-Ray! 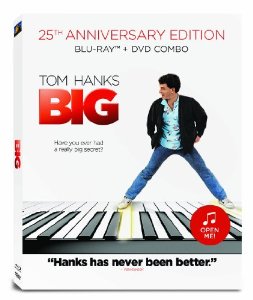