God Bless Billy Beer… I feel like that’s how I start my introduction to all of Billy Beer’s articles.

Now, Billy is a huge fan of… hot women. I’m just going to say it. And the subject of his affection today is Ms. Stacy Keibler. Billy is in the process of starting his own twitter page because he loves her so much. The Keibler Elves. It’s going to sweep the net.

LOL… I’m in an odd mood sorry. I’ll shut up and turn it over to the Beer Man himself!

Check out Billy Beer’s report after the jump!

Welcome back to Billy Beer’s Barstool! Today we are off to see Baltimore’s most famous cheerleader, WCW’s Ms. Handcock, still not sure who it is (you probably know who it is cause it’s in the title of the article) How bout the title of Ms George Clooney? Now everyone knows who I’m talking about. Ms. Stacy Keibler.

Since I mentioned WCW aka Wrestling, that could only mean one thing. The West Coast Wrestling manager superstar Travo is with me. Travo is there to fill in another space on his WWE Encyclopedia with an autograph. Here’s a link to his Encyclopedia page, if you want to see how crazy it is.

I get there a little early today cause a Kate Upton was supposed to be interview a few hours before Stacy. Of course she cancels, and I don’t know this until I’m already halfway there. GRRRRR! I sit back relax, grab a bite to eat and play poker on my phone until it’s time. I get Travo and we got good spots on the rail. After he arrives, it’s waiting time. The last time she was here, there was a huge crowd, and she didn’t sign a thing. It was right around the time she started dating Clooney, so she was the new it girl. 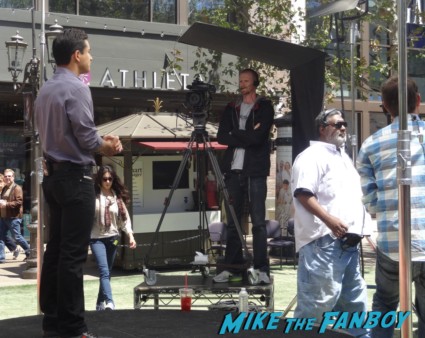 Finally we start hearing the flash bulbs go off, and here she comes. She’s looking really cute in a little sun dress. Not sure what she’s promoting today, but whatever it is, she’s gonna look good doing it. 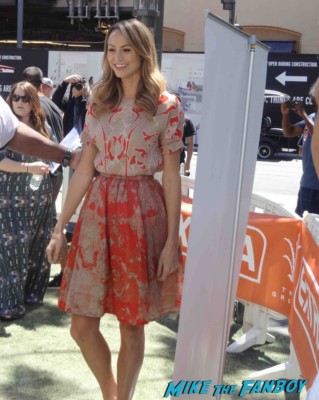 She sits down and talks to Mario. She’s there to promote the American Cancer Society. That’s cool! The interview is very quick. I’m telling Travo to get his book ready. She walks off the stage, and she goes right past us. NOOOOOOO! The stage man told us she wasn’t done, she still had to take some promo pictures. Oops! Started asking too soon. 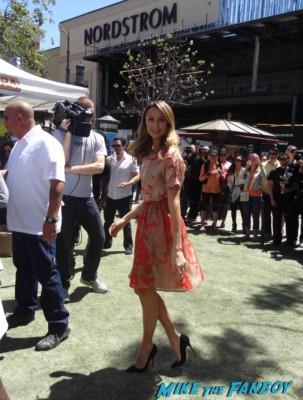 Finally when she was done posing, we ask her again. She takes a couple of pictures with the people next to us, and now her publicist is telling us she has to go. Travo and I start eagerly asking her to sign his book. She finally comes to us and signs his book. 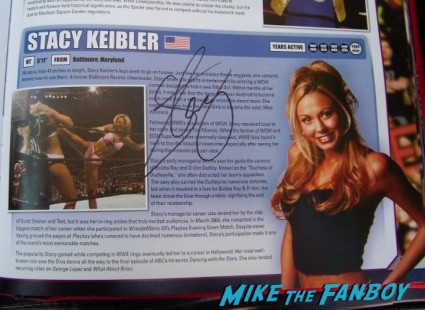 I ask her to sign my picture too which she was nice enough to do. 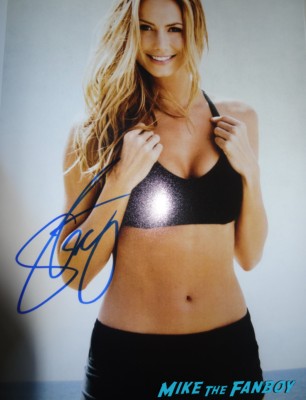 Even though we’re working on the publicists borrowed time, I ask for a quick picture which she might have done, OR this might just be an old picture of her and George Clooney. I’ll let you decide.

(Editor’s Note: Unless George Clooney got shorter, stockier and was carrying a stack of photos to get signed, I’m going to go out on a limb and say it’s you Billy Beer! M-) 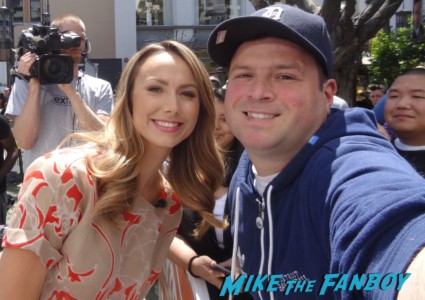 Well, another successful day for Billy Beer and Travo. It’s Happy Hour somewhere, but I gotta get to work. Till next time my drinking buddies!