I keep hearing about how awesome Community is. I hear it over and over and over again. Billy Beer is a huge fan of the show and has always wanted to meet the cast. Now, you would think I would have watched considering I’m a huge Chevy Chase fan, well… I haven’t. There’s just too much to watch these days! It’s on my list though, trust me.

The cast of Community was out and about at a special q and a, so Billy had to go! Chevy Chase was shockingly not among the cast who was there however. Yes, that was sarcasm. If Chevy was there I would have been there in a heartbeat!

Welcome back to Billy Beer’s Barstool.  Today is College Night!  Drink specials all around for all the poor students who pay $26 a credit at the local Community College.  Hoping that their credits will transfer to a University, or doing it just to keep their parents happy that they are going to school.  Today we are blessed with the cast of Community.  A show that I’ve been watching from the start.  It’s one of those shows like Arrested Development, where it gets a lot of praise for it’s thinking, but if you haven’t followed the show you might not get it.  So when I heard they got another season, I was very happy!

The show has been getting some press for the departure of Chevy Chase, but most of the cast was at a Q & A to get the buzz going for season 4.  Among them, 2 of my favorite ladies, Alison Brie and Gillian Jacobs, along with Joel McHale, Danny Pudi, and Yvette Brown.

I was hoping to actually go to today’s Q & A, but I am scheduled to work.  After driving 25 miles to work, I found out they don’t even need me.  Grrrrr, but that means I can make it to the Q & A!  After running to get some pictures for C.B., I get there.  There’s a few graphers there, but not too bad.  I find out Yvette is already inside, so time to wait for everyone else.  Still no C.B. and Gillian is just arriving.  She comes out of the car and is swarmed by the people there.  She’s telling everyone one each, so I don’t really rush in cause she’s gonna sign that one.  After she signs, I ask for a picture which she is happy to do. 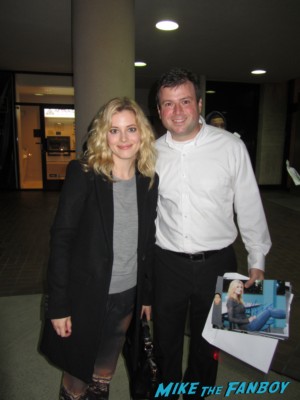 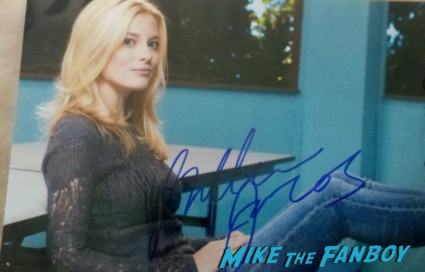 C.B. finally arrives, and just in time.  Next to arrive is Danny Pudi.  Danny is super cool with everyone.  He signs as much as he can before they rush him in.  I have him sign my cast piece, and tell him he can draw a face on it if he wants.

The next limo to pull up is Alison.  Alison is super cute as usual.  She also gets swarmed by the mob.  They’re saying the same thing about one each.  I have her sign my cast picture first.  I’m hoping to get a picture with her that’s been eluding me, but they start to rush her in.  I pull out my picture of her band “The Girls”, and ask if she would sign it before she goes in.  She’s surprised I have it and was more than happy to do so.  I tell her I got tickets to see in band play in the next couple weeks, and she excited to hear it.  But before I could ask for a pic, they pull her in.  🙁 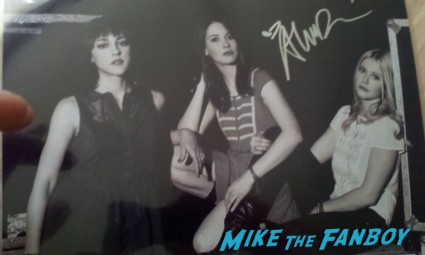 We wait for a little bit, but still no Joel.  Finally, after waiting, a publicist tells us Joel is very late, and please don’t rush him cause they need him in ASAP.  When Joel does arrive, he says “Hi” and tells us he’ll sign on the way out.

We can tell the Q & A is over, people are starting to come out.  All the Limos were lined up.  This could be interesting.  Are they going to come out all at once, or one at a time.  I can see them huddling in the hallway planing their attack.  The first 2 to come out are Yvette and Danny.  EVERYONE goes running to Danny, which was funny, cause RIGHT after him were Gillian and Joel.  I still needed Joel, so I casually walked up to him and had him sign my cast photo.  I look for Yvette next to get on my cast, but she was nowhere to be seen.  Where’s Alison?  I see the mob has made it’s way to Gillian.  Poor Girl!  I get in there really quick to get her on the cast piece and then start to look around. 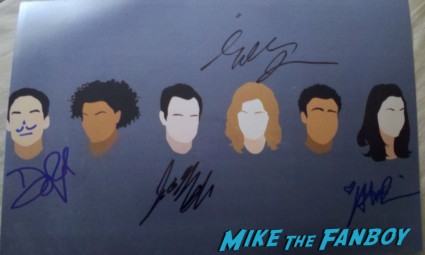 No Yvette, and it looks like Alison made it to her limo without getting bothered too much.  Oh well, no pic with Alison, but a lot of cool autographs from one of my favorite shows, and a picture with Gillian which I was happy about.  And speaking of HAPPY, It’s Happy Hour somewhere, time to find it.