By coincidence, this edition of Book Beat has a PAIR of books that take place in the near future where social media makes and breaks the lives (The Takedown and Beneath the Shine). (You’ll want to check all your privacy settings after reading these!) One of my goals for this year is to review at least one Asian writer in each Book Beat. For this edition,  I going to my bookshelf Article 5, a previously released book by Kristen Simmons. 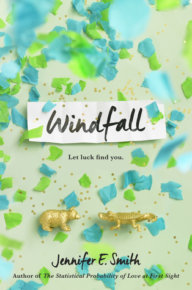 Pitch: Contemporary romance about a girl who is afraid of change

Story: “Alice doesn’t believe in luck—at least, not the good kind. But she does believe in love, and for some time now, she’s been pining for her best friend, Teddy. On his eighteenth birthday—just when it seems they might be on the brink of something—she buys him a lottery ticket on a lark. To their astonishment, he wins $140 million, and in an instant, everything changes.

At first, it seems like a dream come true, especially since the two of them are no strangers to misfortune. As a kid, Alice won the worst kind of lottery possible when her parents died just over a year apart from each other. And Teddy’s father abandoned his family not long after that, leaving them to grapple with his gambling debts. Through it all, Teddy and Alice have leaned on each other. But now, as they negotiate the ripple effects of Teddy’s newfound wealth, a gulf opens between them. And soon, the money starts to feel like more of a curse than a windfall.

As they try to find their way back to each other, Alice learns more about herself than she ever could have imagined . . . and about the unexpected ways in which luck and love sometimes intersect.”

Quick take: Romance, moving on after a devastating loss, dealing with changes big and small…lots of topics wonderfully covered in this book. After all the upheaval in her life, Alice is so afraid of change, she may miss out on finding out what she really wants. Lots of heartache, mixed messages and revelations ahead!

The Takedown by Corrie Wang 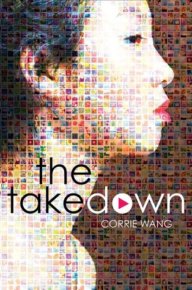 Story: “Kyla Cheng doesn’t expect you to like her. For the record, she doesn’t need you to. On track to be valedictorian, she’s president of her community club, a debate team champ, plus the yummy Mackenzie Rodriguez has firmly attached himself to her hip. She and her three high-powered best friends don’t just own their senior year at their exclusive Park Slope, Brooklyn high school, they practically define the hated species Popular. Kyla’s even managed to make it through high school completely unscathed.

Until someone takes issue with this arrangement.

A week before college applications are due, a video of Kyla ‘doing it’ with her crush-worthy English teacher is uploaded to her school’s website. It instantly goes viral, but here’s the thing: it’s not Kyla in the video. With time running out, Kyla delves into a world of hackers, haters and creepy stalkers in an attempt to do the impossible-take something off the internet-all while dealing with the fallout from her own karmic footprint. Set in near-future Brooklyn, where privacy is a bygone luxury and every perfect profile masks damning secrets, The Takedown is a stylish, propulsive, and provocative whodunit, asking who would you rely on if your tech turned against you?”

Quick take: This is a page turner set in a world where social media and personal identity have evolved to be one and the same. The beginning of the book is tough to get into since Kyla has such high and mighty attitude and the language in the book feels like it’s a completely foreign world. After the scandal breaks, she becomes more relateable and the story builds and the pages fly by as she tries to figure out what’s happening and why.

Beneath the Shine by Sarah Fine 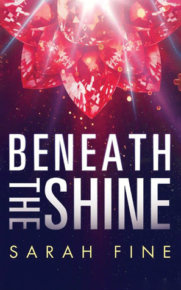 Pitch: YA The Scarlet Pimpernel set in the future

Story: “In a future United States where those who control technology control the wealth, seventeen-year-old Marguerite’s viral video propels a populist candidate to presidential victory on a platform of “tech for all.” But as the mouthpiece of the new leader determined to break the elite stronghold, Marguerite finds herself on the opposite side of the divide in a new high school full of technocrat teens.

When the enigmatic Percy, with his flamboyant fashion sense, sharp wit, and tragic past, takes an interest in her, she is suspicious. But with everyone against her, she needs an ally. Percy is drawn to Marguerite’s passion for the cause, but the legacy of his murdered scientist parents prevents him from letting her get too close.

Soon terrorists strike the capital and technocrat leaders begin turning up dead, and the two must work together to protect both their families and the country. With everyone literally plugged into technology, total domination will take only a flip of the switch. In order to preserve their freedom and the future Marguerite envisions, she and Percy may be forced to pay the ultimate price.”

Quick take: Beneath the Shine tackles a lot of topics that are especially relevant this year: technology, privacy, privilege, corrupt government, presidents who believe corporate dollars are the highest priority. There’s thoughtful dialogue on both sides of some of these topics so it’s not just a one-sided lecture. The beginning is a but clunky with a lot to set up: a complicated political environment, new technology and the different characters. The story then picks up with a clever update for Percy and more of a stretch for Marguerite. Ultimately, there are good things in this book, but I didn’t feel like it all succeeded for me.

The Whole Thing Together by Ann Brashares 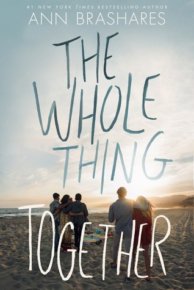 Pitch: The different sides of a complex family collide in this book from the author of The Sisterhood of the Traveling Pants

Story: “Summer for Sasha and Ray means the sprawling old house on Long Island. Since they were children, they’ve shared almost everything—reading the same books, running down the same sandy footpaths to the beach, eating peaches from the same market, laughing around the same sun-soaked dining table. Even sleeping in the same bed, on the very same worn cotton sheets. But they’ve never met.

Sasha’s dad was once married to Ray’s mom, and together they had three daughters: Emma, the perfectionist; Mattie, the beauty; and Quinn, the favorite. But the marriage crumbled and the bitterness lingered. Now there are two new families—and neither one will give up the beach house that holds the memories, happy and sad, of summers past.

The choices we make come back to haunt us; the effect on our destinies ripples out of our control…or does it? This summer, the lives of Sasha, Ray, and their siblings intersect in ways none of them ever dreamed, in a novel about family relationships, keeping secrets, and most of all, love.”

Quick take: The writing is compelling and breezy to read, but we don’t get a lot of depth on the parents and several characters. 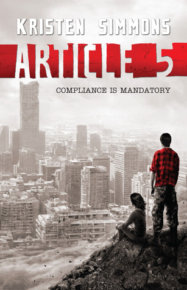 Pitch: First book in a dystopian trilogy where a young girl joins the resistance

The Bill of Rights has been revoked, and replaced with the Moral Statutes.

Seventeen-year-old Ember Miller is old enough to remember that things weren’t always this way. Living with her rebellious single mother, it’s hard for her to forget that people weren’t always arrested for reading the wrong books or staying out after dark. It’s hard to forget that life in the United States used to be different.

Ember has perfected the art of keeping a low profile. She knows how to get the things she needs, like food stamps and hand-me-down clothes, and how to pass the random home inspections by the military. Her life is as close to peaceful as circumstances allow.

That is, until her mother is arrested for noncompliance with Article 5 of the Moral Statutes. And one of the arresting officers is none other than Chase Jennings—the only boy Ember has ever loved.”

Quick take: Years after dystopians were The Next Big Thing, the world of Article 5 feels dated with an unexplained War, a vague authoritarian government and rebellion. There’s something compelling about Ember’s story and her relationship with Chase so I did read the next books (Breaking Point and Three), but I will admit to skipping around a bit.

Thanks to Random House (Windfall, The Whole Thing Together), Freeform (The Takedown), Skyscape (Beneath the Shine) for providing the books for review. Want more details on my impression of these and other books? Check out my ratings and full reviews at Goodreads. 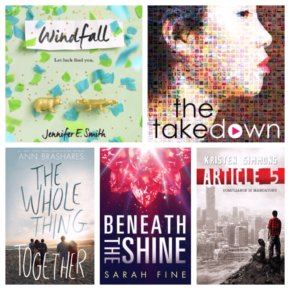