Oh Emma Bannon and Archibald Clare what am I to do with the two of you?  What a mess you’ve made of things Emma, and I can only imagine the fireworks – which in your case might be literal – that will fly once Clare discovers what you’ve done.  And Mikal…what dark secrets are you hiding from your Prime?  How will this deed affect you and your ties to her?  But all this is in the future and remains to be seen, for now let us focus on the matters at hand. 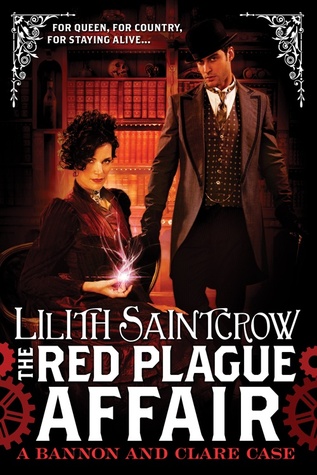 In “The Red Plague Affair” Bannon and Clare once again are called upon to save Britannia, ruled by the great Spirit through her vessel Queen Victrix.  As a trusted magician Prime to the Queen Emma Bannon is recruited to do what must be done to protect the Empire.  No matter the cost.  She soon learns what she must protect the Empire from was commissioned as a weapon by Victrix herself.  In the end Bannon will pay many costs in her loyalty to her Queen and might finally push the Spirit/Ruler past the point of forgiveness in her need to avenge those she holds most dear.

Clare, meanwhile, finds himself after his arch nemesis Dr. Vane yet again.  He knocks a little too closely on Death’s door, which finds him as an indefinite guest in the home of Emma Bannon.  Soon he finds himself too idle, so when Bannon elicits his help in her new mission for Queen and Country he is only too eager to help.  However, his path soon crosses that of Dr. Vane again and the two great Mentaths find they must call a sort of truce in order to save, not only the Empire, but themselves.

By the end great sacrifices have been made, power shifts and deep secrets have clouded over things and our beloved Prime may have kick started her downfall.  Or her rise to immense power.

The first thing I like about the Bannon and Clare books is the alternate Victorian era Saintcrow has created.  She’s weaved together a very believable world where magic and supernatural abilities knit into the fabric of the “real world” version we know so very well.  There are rules and laws to be obeyed in this new ‘nature’ and she does a great job at having them make sense.

The second thing I like is the relationship between Bannon and Clare.  It’s very Mulder and Scully “esque” in how they obviously care very much for one another but never cross the line into physical romance.  I like that tension, a lot of books are missing that tension, and even if they never get together that tension will still be there smoldering.  Delicious.

There were only some minor drawbacks for me and those mostly had to do with pacing.  I feel the end was rushing on a bit, and physical time might have been ignored here and there, but not enough to really derail my enjoyment.  It’s also a novel you have to pay attention to because there are some events that are alluded at but never outright described which I’m sure will play into later books.  I like books that engage my mind but still allow me to have fun.

I feel like this was a satisfying second book, and would probably make a good stand alone.  The world is intricate but still easy to grasp.  I’m very much looking forward to the next adventure.

**Big thank you to Orbit for the eGalley through NetGalley