It’s summer time and if you’re looking for some great reads, I have a few to offer you this month! 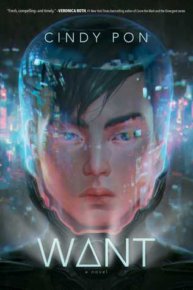 Pitch: Blade Runner meets Oceans 11 in this YA thriller set in Taipei

Story: “From critically acclaimed author Cindy Pon comes an edge-of-your-seat sci-fi thriller, set in a near-future Taipei plagued by pollution, about a group of teens who risk everything to save their city.

Jason Zhou survives in a divided society where the elite use their wealth to buy longer lives. The rich wear special suits, protecting them from the pollution and viruses that plague the city, while those without suffer illness and early deaths. Frustrated by his city’s corruption and still grieving the loss of his mother who died as a result of it, Zhou is determined to change things, no matter the cost.

With the help of his friends, Zhou infiltrates the lives of the wealthy in hopes of destroying the international Jin Corporation from within. Jin Corp not only manufactures the special suits the rich rely on, but they may also be manufacturing the pollution that makes them necessary.

Yet the deeper Zhou delves into this new world of excess and wealth, the more muddled his plans become. And against his better judgment, Zhou finds himself falling for Daiyu, the daughter of Jin Corp’s CEO. Can Zhou save his city without compromising who he is, or destroying his own heart?”

Quick take: This is everything you want in a futuristic sci-fi thriller! There lots of cool world-building with new technologies and a deep social divide. Despite the dire environment, this book is a love letter to Taipei and captures it’s vibrancy, energy and, of course, the food. Check out my interview with Cindy for more about this book and the power of #CuteAsianBoy.

Once and for All by Sarah Dessen 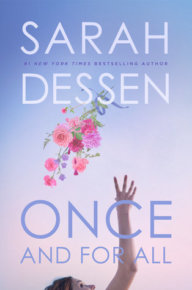 Pitch: Another winner from Sarah Dessen! This one is about beginnings, hope, second chances, disruption and love. Of course it’s about love when the title is Once and For All !

Story: “As bubbly as champagne and delectable as wedding cake, Once and for All, Sarah Dessen’s thirteenth novel, is set in the world of wedding planning, where crises are routine.

Louna, daughter of famed wedding planner Natalie Barrett, has seen every sort of wedding: on the beach, at historic mansions, in fancy hotels and clubs. Perhaps that’s why she’s cynical about happily-ever-after endings, especially since her own first love ended tragically. When Louna meets charming, happy-go-lucky serial dater Ambrose, she holds him at arm’s length. But Ambrose isn’t about to be discouraged, now that he’s met the one girl he really wants.

Sarah Dessen’s many, many fans will adore her latest, a richly satisfying, enormously entertaining story that has everything—humor, romance, and an ending both happy and imperfect, just like life itself.”

Quick take: After a magical first love, Louna is reluctant to date again. Its so rare for a book to feature two love stories for one character, but this perfectly narrates Louna’s first relationship and her first steps at moving on. Be prepared for double the heartbreak in one book. Yes, this has all the trademark Sarah Dessen story, character and emotion so be prepared to give your heart a workout.

Bonus: there’s an adorable dog too! 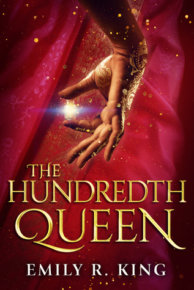 Story: “As an orphan ward of the Sisterhood, eighteen-year-old Kalinda is destined for nothing more than a life of seclusion and prayer. Plagued by fevers, she’s an unlikely candidate for even a servant’s position, let alone a courtesan or wife. Her sole dream is to continue living in peace in the Sisterhood’s mountain temple.

But a visit from the tyrant Rajah Tarek disrupts Kalinda’s life. Within hours, she is ripped from the comfort of her home, set on a desert trek, and ordered to fight for her place among the rajah’s ninety-nine wives and numerous courtesans. Her only solace comes in the company of her guard, the stoic but kind Captain Deven Naik.

Faced with the danger of a tournament to the death—and her growing affection for Deven—Kalinda has only one hope for escape, and it lies in an arcane, forbidden power buried within her.

In Emily R. King’s thrilling fantasy debut, an orphan girl blossoms into a warrior, summoning courage and confidence in her fearless quest to upend tradition, overthrow an empire, and reclaim her life as her own.”

Quick take: The beginning is a bit rough, but then the book hits its stride once Kalinda is off to meet her destiny. It’s an enjoyable fantasy with lots of blood. Lots. Luckily, the next book in the series, The Fire Queen, is out in September so we don’t have to wait long to find out what happens next! 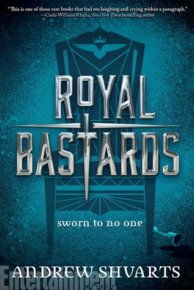 Story: “Being a bastard blows. Tilla would know. Her father, Lord Kent of the Western Province, loved her as a child, but cast her aside as soon as he had trueborn children.

At sixteen, Tilla spends her days exploring long-forgotten tunnels beneath the castle with her stablehand half brother, Jax, and her nights drinking with the servants, passing out on Jax’s floor while her castle bedroom collects dust. Tilla secretly longs to sit by her father’s side, resplendent in a sparkling gown, enjoying feasts with the rest of the family. Instead, she sits with the other bastards, like Miles of House Hampstedt, an awkward scholar who’s been in love with Tilla since they were children.

Then, at a feast honoring the visiting princess Lyriana, the royal shocks everyone by choosing to sit at the Bastards’ Table. Before she knows it, Tilla is leading the sheltered princess on a late-night escapade. Along with Jax, Miles, and fellow bastard Zell, a Zitochi warrior from the north, they stumble upon a crime they were never meant to witness.

Rebellion is brewing in the west, and a brutal coup leaves Lyriana’s uncle, the Royal Archmagus, dead—with Lyriana next on the list. The group flees for their lives, relentlessly pursued by murderous mercenaries; their own parents have put a price on their heads to prevent the king and his powerful Royal Mages from discovering their treachery.

The bastards band together, realizing they alone have the power to prevent a civil war that will tear their kingdom apart—if they can warn the king in time. And if they can survive the journey.”

Quick take: Fun adventure with a band of unlikely misfits who joI’m together to survive and take on the world. The world building has echoes of A Song of Ice and Fire and several plot points are familiar to other YA fantasies, but it’s still a fun adventure with a touch of romance and intrigue.

Saints and Misfits by S.K. Ali 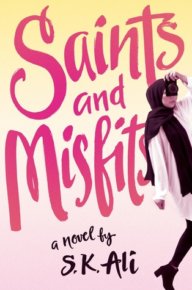 Pitch: Intriguing story of a girl caught between different cultures

Story: “Saints and Misfits is an unforgettable debut novel that feels like a modern day My So-Called Life…starring a Muslim teen.

How much can you tell about a person just by looking at them?

Janna Yusuf knows a lot of people can’t figure out what to make of her…an Arab Indian-American hijabi teenager who is a Flannery O’Connor obsessed book nerd, aspiring photographer, and sometime graphic novelist is not exactly easy to put into a box.

And Janna suddenly finds herself caring what people think. Or at least what a certain boy named Jeremy thinks. Not that she would ever date him—Muslim girls don’t date. Or they shouldn’t date. Or won’t? Janna is still working all this out.

While her heart might be leading her in one direction, her mind is spinning in others. She is trying to decide what kind of person she wants to be, and what it means to be a saint, a misfit, or a monster. Except she knows a monster…one who happens to be parading around as a saint…Will she be the one to call him out on it? What will people in her tightknit Muslim community think of her then?”

Quick take: This is one of the first books from the new Salaam Reads imprint at Simon and Schuster. While Janna’s faith is an important part of who she is, that’s not the focus of the story. This book is about Janna’s issues with just about everyone: her family, her friends, frenemies, the boy she likes and the boy that she calls a “Monster.” The Monster is a predator so sensitive readers may need to be cautious since the story is about Janna coming to terms with the Monster and what happened to her. Janna needs to figure out who she is and how to take that back once someone’s tried to take it from her. Saints and Misfits shows the variation in how different Muslims practice their faith. Some characters are quite devout so religion is an important part of this book, but the book isn’t lecturing people in a high-handed manner. Yes, there’s a lot to absorb in this ambitious and successful book.

Song of the Current by Sarah Tolcser 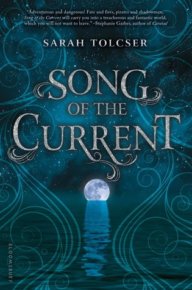 Pitch: YA fantasy/romance about a girl, a river and her mysterious cargo

Story: “Caroline Oresteia is destined for the river. For generations, her family has been called by the river god, who has guided their wherries on countless voyages throughout the Riverlands. At seventeen, Caro has spent years listening to the water, ready to meet her fate. But the river god hasn’t spoken her name yet—and if he hasn’t by now, there’s a chance he never will.

Caro decides to take her future into her own hands when her father is arrested for refusing to transport a mysterious crate. By agreeing to deliver it in exchange for his release, Caro finds herself caught in a web of politics and lies, with dangerous pirates after the cargo—an arrogant courier with a secret—and without the river god to help her. With so much at stake, Caro must choose between the life she always wanted and the one she never could have imagined for herself.

From debut author Sarah Tolcser comes an immersive and romantic fantasy set along the waterways of a magical world with a headstrong heroine determined to make her mark.”

Quick take: It’s not really a pirate story even though most of it takes place on the water. It’s a fun adventure/romance. Some of the plot points felt familiar, but this series shows promise so I’m curious as to where the next book goes. 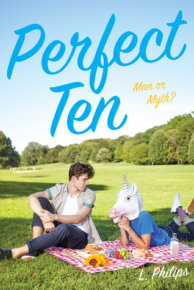 Pitch: Zippy little romance about a guy’s search for the perfect guy.

It’s been two years since Sam broke up with the only other eligible gay guy in his high school, so to say he’s been going through a romantic drought is the understatement of the decade. But when Meg, his ex-Catholic-turned-Wiccan best friend, suggests performing a love spell, Sam is just desperate enough to try. He crafts a list of ten traits he wants in a boyfriend and burns it in a cemetery at midnight on Friday the 13th.

But does a Perfect Ten even exist? Find out in this delectable coming-of-age romcom with just a touch of magic.”

Quick take: This is a fluffy read and some fun moments, but I didn’t like the main character’s contradictions, particularly how he treats his best female friend. He also complains how his first boyfriend was jealous and he’s basically two-timing all the guys he’s seeing. Yes, Sam can be charming (and so are parts of the book), but I also can’t forget that he’s unaware and selfish. It’s great that the book can be sex-positive and tell a LGBT love story, I just wish I could really root for him.

Thanks to Simon and Schuster (Want, Saints and Misfits), Penguin Teen (Once and for All, Perfect Ten), Disney-Hyperion (Royal Bastards), Skyscape (The Hundredth Queen), Bloomsbury (Song of the Current) for providing the books for review. Want more details on my impression of these and other books? Check out my ratings and full reviews at Goodreads. 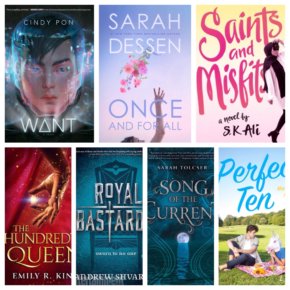