Summer has finally hit with scorching heat waves and summer block buster movies. If you’re looking for a new beach read, I have a fun travel adventure and a little Wonder Woman for the little worders in your life!

The Gentleman’s Guide to Vice and Virtue by Mackenzi Lee 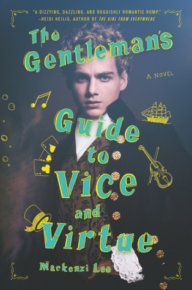 Pitch: A historical, fictional, gay romp through Europe with a touch of alchemy

Story: “An unforgettable tale of two friends on their Grand Tour of 18th-century Europe who stumble upon a magical artifact that leads them from Paris to Venice in a dangerous manhunt, fighting pirates, highwaymen, and their feelings for each other along the way.

Henry ‘Monty’ Montague was born and bred to be a gentleman, but he was never one to be tamed. The finest boarding schools in England and the constant disapproval of his father haven’t been able to curb any of his roguish passions—not for gambling halls, late nights spent with a bottle of spirits, or waking up in the arms of women or men.

But as Monty embarks on his grand tour of Europe, his quest for a life filled with pleasure and vice is in danger of coming to an end. Not only does his father expect him to take over the family’s estate upon his return, but Monty is also nursing an impossible crush on his best friend and traveling companion, Percy.

Still it isn’t in Monty’s nature to give up. Even with his younger sister, Felicity, in tow, he vows to make this yearlong escapade one last hedonistic hurrah and flirt with Percy from Paris to Rome. But when one of Monty’s reckless decisions turns their trip abroad into a harrowing manhunt that spans across Europe, it calls into question everything he knows, including his relationship with the boy he adores.

Witty, romantic, and intriguing at every turn, The Gentleman’s Guide to Vice and Virtue is a sumptuous romp that explores the undeniably fine lines between friendship and love.”

Quick take: Monty is so charming and funny you can forget he’s a rogue of the first order. This is a fun adventure tale that flies by with Mackenzi Lee’s easy, breezy writing. With a swoony romance, crazy twists, loving details out the cities and history, it’s a perfect romp. 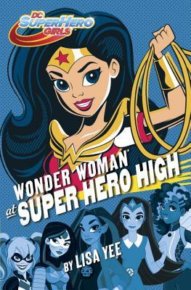 Story: “This groundbreaking new middle grade series follows DC Comics’ most iconic female Super Heroes and Super-Villains . . . as high schoolers. At Super Hero High, the galaxy’s most powerful teens nurture their powers and master the fundamentals of what it means to be a hero.”

Quick take: A perfect way to introduce Wonder Woman to kids who may be a little too young to see the recent movie. It’s funny and fresh and both boys and girls will enjoy this tale.

Now I Rise by Kiersten White 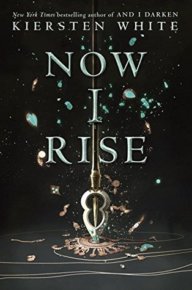 Pitch: The continued origin story of a gender-flipped Dracula

Story: “Lada Dracul has no allies. No throne. All she has is what she’s always had: herself. After failing to secure the Wallachian throne, Lada is out to punish anyone who dares to cross her blood-strewn path. Filled with a white-hot rage, she storms the countryside with her men, accompanied by her childhood friend Bogdan, terrorizing the land. But brute force isn’t getting Lada what she wants. And thinking of Mehmed brings little comfort to her thorny heart. There’s no time to wonder whether he still thinks about her, even loves her. She left him before he could leave her.

What Lada needs is her younger brother Radu’s subtlety and skill. But Mehmed has sent him to Constantinople—and it’s no diplomatic mission. Mehmed wants control of the city, and Radu has earned an unwanted place as a double-crossing spy behind enemy lines. Radu longs for his sister’s fierce confidence—but for the first time in his life, he rejects her unexpected plea for help. Torn between loyalties to faith, to the Ottomans, and to Mehmed, he knows he owes Lada nothing. If she dies, he could never forgive himself—but if he fails in Constantinople, will Mehmed ever forgive him?

As nations fall around them, the Dracul siblings must decide: what will they sacrifice to fulfill their destinies? Empires will topple, thrones will be won . . . and souls will be lost.”

Quick take: This series is hard for me review because there is something engrossing about the story, but I don’t really like the characters. They are angry, the love/hate each other and they do terrible things. This sequel is less about the Dracula legend and more about lots of action, but ultimately, there is a big showdown and transformation still ahead for the next book in the series.

The Impossible Vastness of Us by Samantha Young 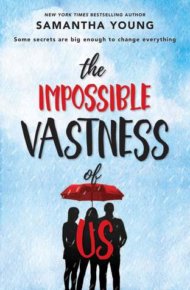 Pitch: Contemporary story of a girl who suddenly joins a very wealthy family and school and tries to fit in

Story: “India Maxwell hasn’t just moved across the country—she’s plummeted to the bottom rung of the social ladder. It’s taken years to cover the mess of her home life with a veneer of popularity. Now she’s living in one of Boston’s wealthiest neighborhoods with her mom’s fiancé and his daughter, Eloise. Thanks to her soon-to-be stepsister’s clique of friends, including Eloise’s gorgeous, arrogant boyfriend Finn, India feels like the one thing she hoped never to be seen as again: trash.

But India’s not alone in struggling to control the secrets of her past. Eloise and Finn, the school’s golden couple, aren’t all they seem to be. In fact, everyone’s life is infinitely more complex than it first appears. And as India grows closer to Finn and befriends Eloise, threatening the facades that hold them together, what’s left are truths that are brutal, beautiful, and big enough to change them forever… ”

Quick take: For the most part, I mildly enjoyed this melodramatic book and several of the characters with their many secrets. A couple scenes seemed forced to make the biggest melodramatic impact and the dialogue gets preachy, but otherwise, I fell into the story.

Warning: There are triggers for abuse so sensitive readers may want to be cautious.

Thanks to HarperCollins (The Gentleman’s Guide to Vice and Virtue), Random House (Now I Rise) and Harlequin Teen (The Impossible Vastness of Us) for providing the books for review. Want more details on my impression of these and other books? Check out my ratings and full reviews at Goodreads. 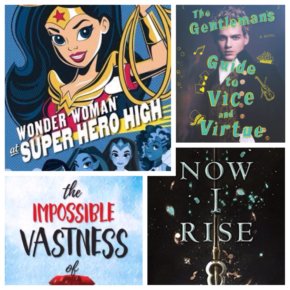