Home / Fanboying! • Movie Premieres • The Lovely Erica / Mission Impossible 4 Ghost Protocol New York Movie Premiere! Or How Erica Went To New York For The Holidays And Got A Rock! Doh!

Doh! Erica headed to the city that never sleeps for a quick holiday jaunt… And of course this just happens to coincide with the New York premiere of Mission Impossible: Ghost Protocol… I know we’re all shocked! LOL…

Erica spent the day trying to get Risky Business star Tom Cruise at the premiere, and also Avengers star Jeremy Renner… Alas, it doesn’t seem that successful. I never thought I would say this but I think premiere’s are better here in Los Angeles! I know right?

Mission Impossible is not only the name of the movie, but also the theme for tonight. Sigh. You can tell where this is going!

I’m told by security that this is the biggest premiere they’ve ever hosted at this movie theater in NY – they took 3 days to set up the carpet with electronic screens and heaters to keep the talent comfortable – this is December, after all! The carpet is tented with a clear plastic on one side so you can see what’s going on, even if the pictures are slightly distorted. 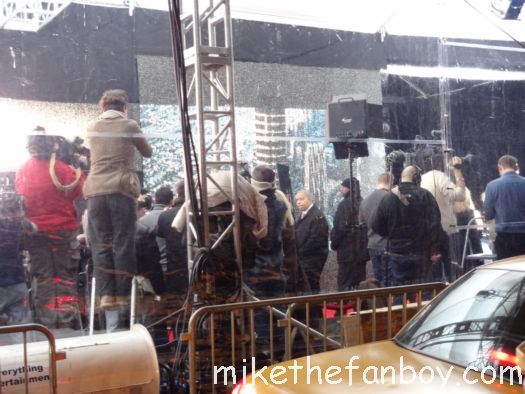 I arrive at around 3:30 and join a very small crowd of folks. I’m next to a couple of cool girls who are from the Midwest (of course!). We’re lined up with the opening of the tent, but then I see they are continuing to build the red carpet further out. After a quick chat with security, we move and grab the last of the very limited prime spots just across from the drop off point. 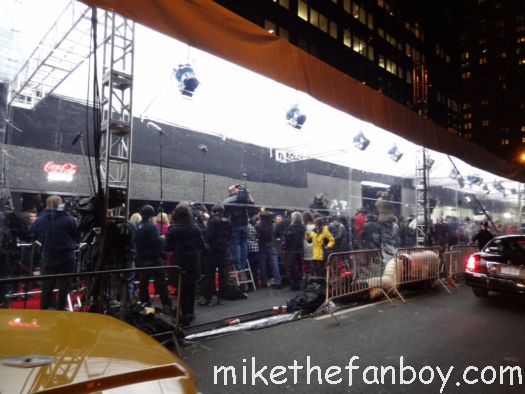 Tom Cruise is supposed to be a great signer (I’ve never gotten him) so I’m not so worried about getting Tom. There are others in the cast who are more temperamental with fans (cough, Jeremy Renner!) so if they sign, it’ll be for the photo op only so I want to be close. The space is limited, but it’s close to the drop off. 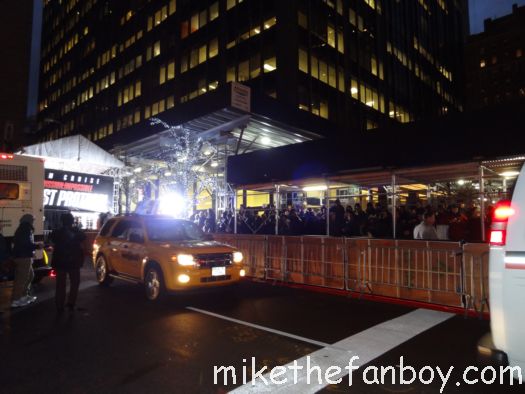 At around 5 pm, they start loading people right on the carpet, opposite from us. Oh no! It’s a fan pit! And it’s for contest winners only! Ugh! That means we’re not going to get close and there are over 100 people across from us. But Tom’s a great signer, right? There’s still a chance he will come over…right? Right? Bueller? Bueller? 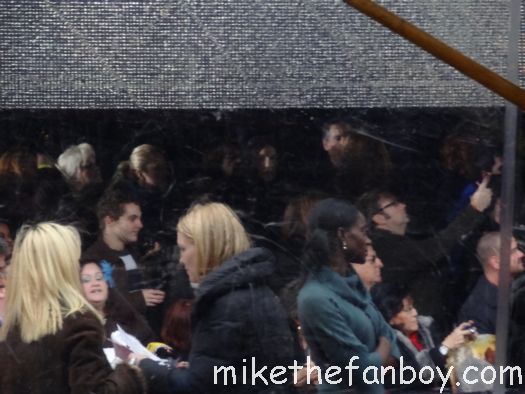 The barricade where we’re standing is pretty tiny – just three barricades wide and then to the left there’s a driveway and then a section of the sidewalk sectioned off for a power generator. There are a ton of tourists and other folks blocking the driveway. It’s about 5 people deep in the driveway so the NYPD are clearing it every so often, but people are pretty much ignoring the police. Not a good sign. If there’s chaos, security won’t bring the celebrities over. 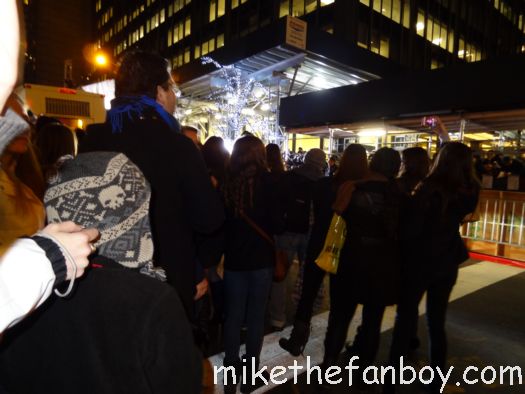 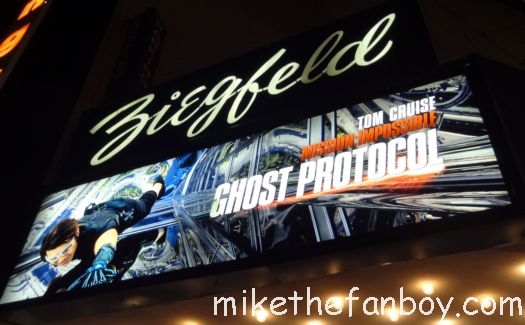 At 6 pm, the carpet is officially starting. After a few minutes, a car drops and it’s Paula Patton! I was lucky enough to get her at an appearance earlier in the day. 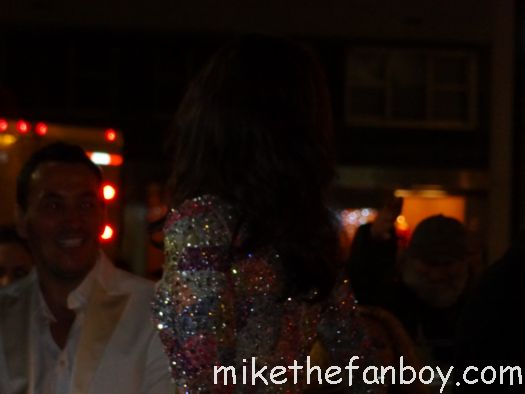 She is really friendly and I can see her chatting and signing and taking pictures with the contest winners, but she does not come over. 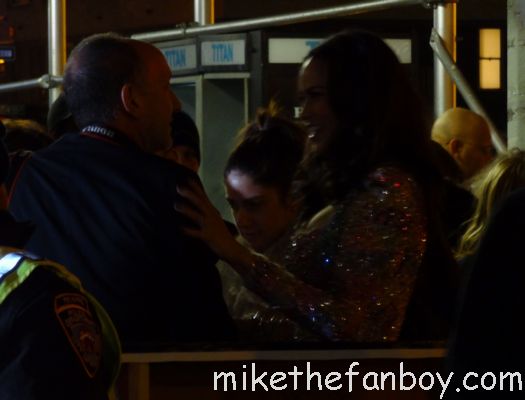 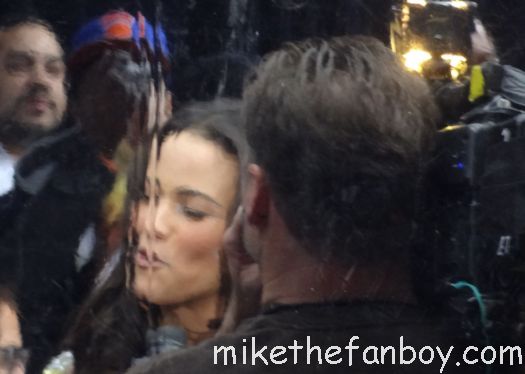 By now, the driveway next to me is completely filled and there are people spilling into the street and lining up in FRONT of the barricades. Seriously? In front? 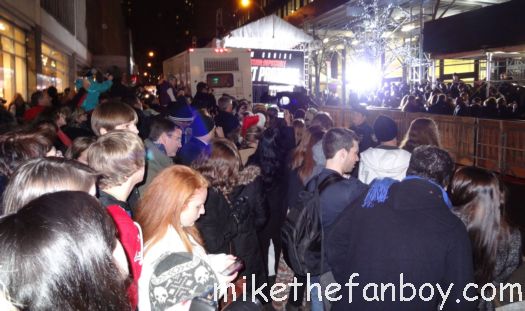 The police are trying to clear the street and the driveway, but no one is listening. Really, the NYPD should’ve put in a barricade so people won’t be standing where they shouldn’t. 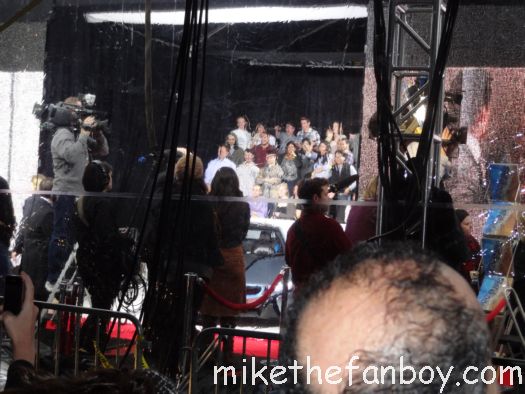 A few minutes later, another car drops and, wow, it’s Tom Cruise! He’s way early…must mean he is planning to spend some time with the fans. Yeah! 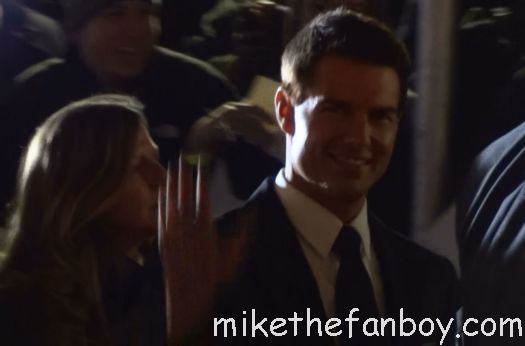 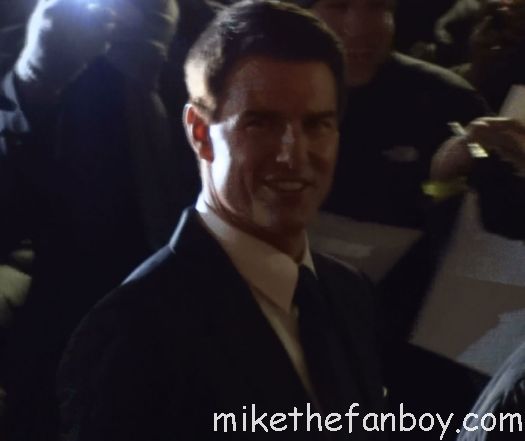 However, Tom waves to us and the contest winners’ pit and heads straight in. That’s odd. However, if his reputation is right, he’ll probably be back out to sign in a bit.

Another car drops and I see it’s Brad Bird, the director! Brad is also the director of the fantastic Incredibles and the main reason why I’m actually interested in seeing this film. 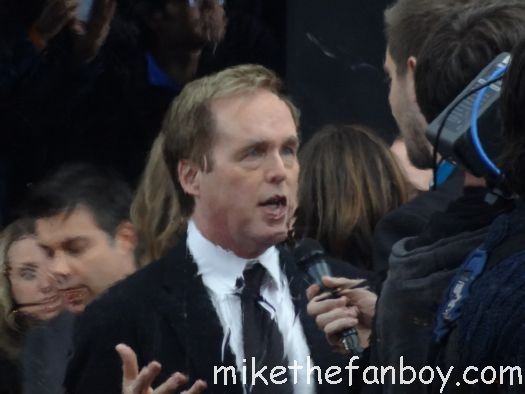 I call out to him and he waves, but he’s clearly not interested in coming over. He’s chatting away with a bunch of the staff on the carpet and isn’t really signing for the contest pit. 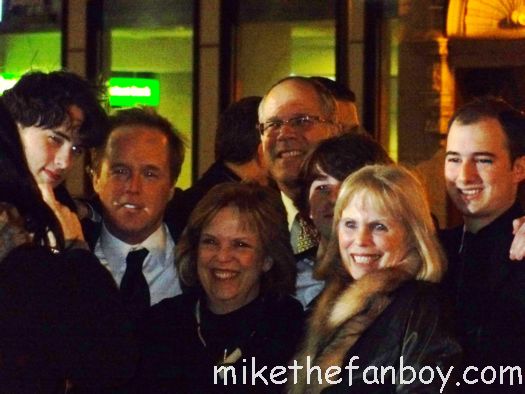 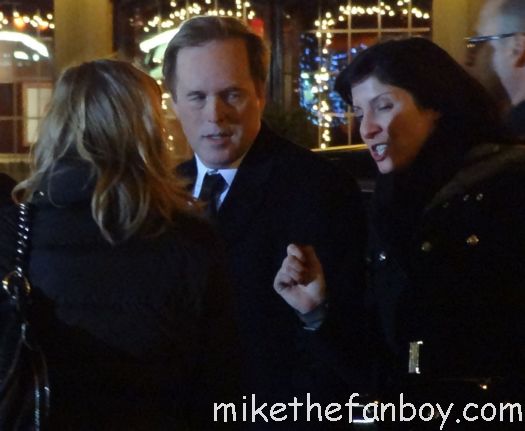 Suddenly, I see Tom Cruise is headed back out to us! I think he basically walked Katie in and did pictures together so she doesn’t have to stand next to him as he spends time with the fans. 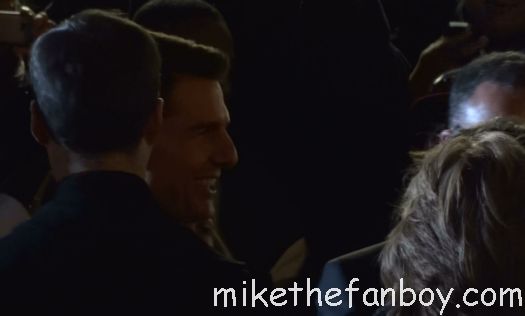 Anyway, Tom heads to the start of the carpet and we start to chant to see if we can get him to cross over to us. Tom greets Brad Bird and they chat and hug and then Tom gets down to business. 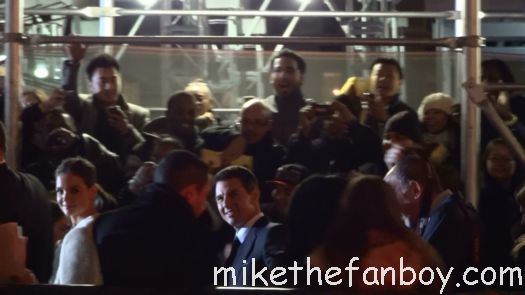 He talks with his people and then starts signing for the contest winners. Drat! Not a good sign! 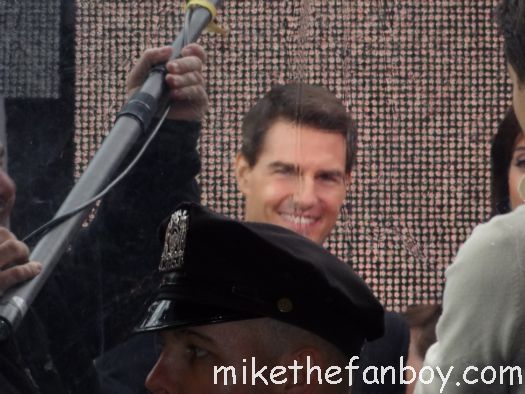 I call out “Tom, don’t forget about us!!” and he turns around and waves and then talks to his assistant. She comes over to us to tell us that the NYPD will not allow him to cross the street. Funny, since they told me earlier that it’s up to the celebrity. However, there are at least a hundred people standing in the middle of the street, in front of the barricade so I guess I can’t blame them. 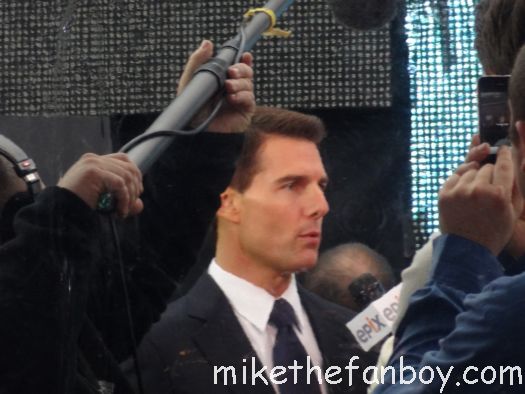 These folks in the middle of the street are calling for Tom to come over, not realizing that they are the reason that he can’t come over. Way to go people! I don’t think our chances were great, but they went from slim to none with all these folks ignoring security and the police. Sigh! 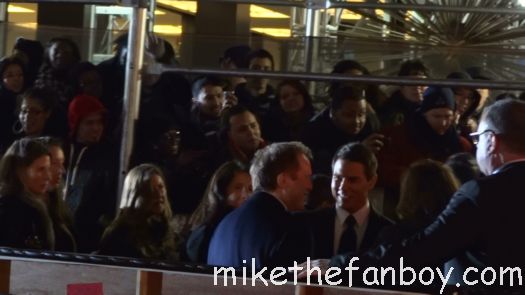 Simon Pegg arrives next. Simon is a really nice guy and makes a point of turning to wave to us several times as he works the contest winners pit, but, alas, he too is barred from crossing. Fortunately I got him earlier in the week so I’m not heartbroken, but the guy next to me is.

Anil Kapoor arrives and heads in with barely a stop for the pit. I saw him earlier in the week and he waved, but did not sign. 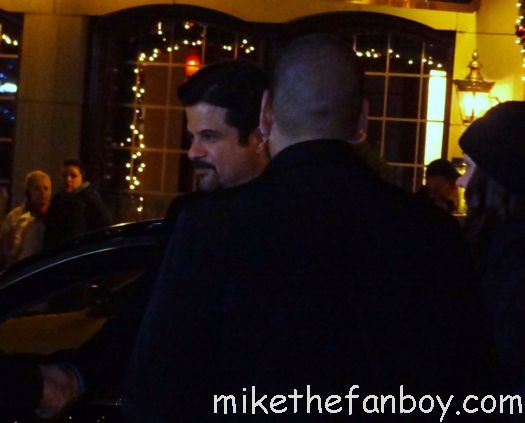 JJ Abrams also arrives and signs for a few in the pit before heading in. 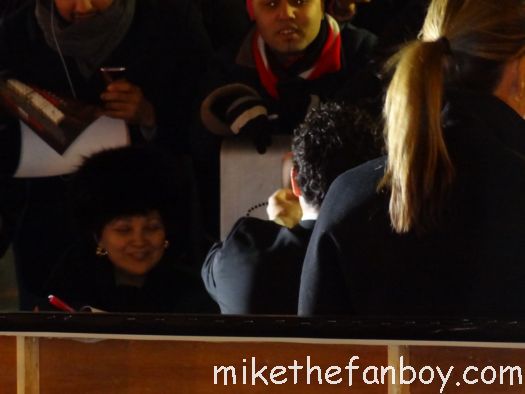 Michael Nyqvist, best known for the original Girl with the Dragon Tattoo, is also in the film and he arrives next. 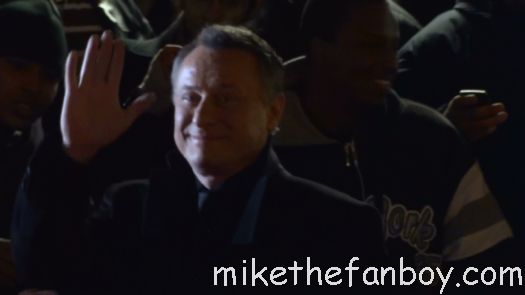 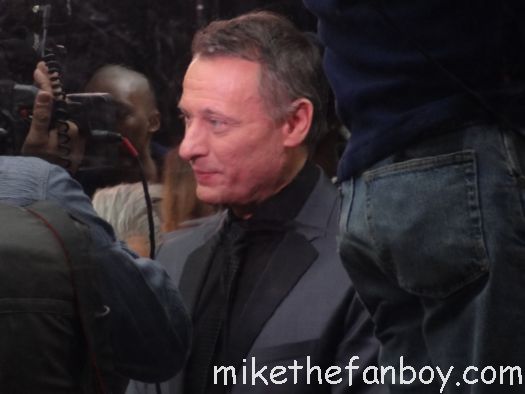 Then I see Josh Holloway arrive. The pit sees him too and a huge cry for “Sawyer!!!!” fills the air. Only thing is, it’s about 20 minutes until the start of the film so they rush him by the fan pit since there’s a long carpet ahead. 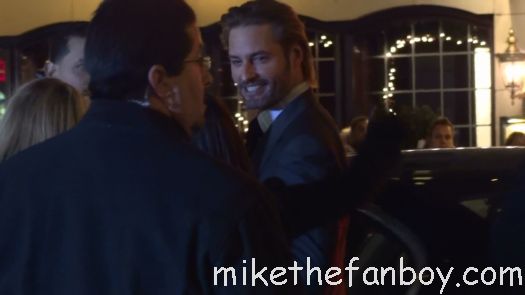 A couple other celebrities also arrive including Robin Thicke, Stephen Baldwin and Jennifer Morrison (I never have my Once Upon A Time poster when I see her!!).

At the time the movie is about to start, Jeremy Renner finally arrives with a great excuse to dash by everyone. All week Jeremy has been taking the “diva” route so it’s not a surprise that he’s not sparing a moment for fans or contest winners.

So that’s about it! On my way out, I notice that there is ANOTHER contest winner pit inside the tent, half the length of the red carpet. It holds approximately 600 people. Holy crap! With 700 contest winners on the carpet, no wonder they didn’t spare time for the fans on the street!

For the other fan pit’s I’ve seen at premieres (the massive Harry Potter and the Deathly Hallows part 2, for one), they took some folks off the street so the crowd is a mix of contest winners and the fans who are willing to wait hours in the extreme heat or cold. Not here though, which is pretty disappointing.