All I keep hearing about is this awesome new movie called In A World… Seriously, Jack saw it… JM saw it… And they both loved it! Like, went on and on about how much this movie rocks.

And this giveaway… Wait for it…

It’s a signed movie poster! From the awesome… From the sexy.. From the glorious Ms. Lake Bell! 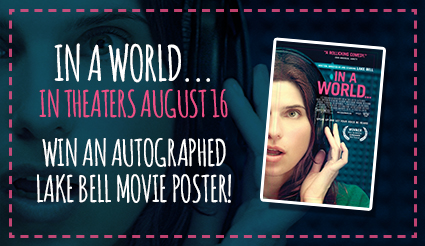 Can I get an amen?

In this hilarious and heart-felt new film, In A World… Lake Bell (No Strings Attached, “Children’s Hospital”) stars as a struggling vocal coach who strikes it big in the cutthroat world of movie-trailer voiceovers, only to find herself in direct competition with the industry’s reigning king—her father!

Check out the In A World… Blog App and take the Movie Trailer Voiceover Quiz! You can also watch hilarious and action-packed GIFs from the film and view the official trailer for this clever indie comedy!

Simply post your results from the Movie Trailer Voiceover Quiz!