Home / Fanboying! / Vin Diesel is Awesome to CB and Signs All His Stuff Fast and Furious Like! 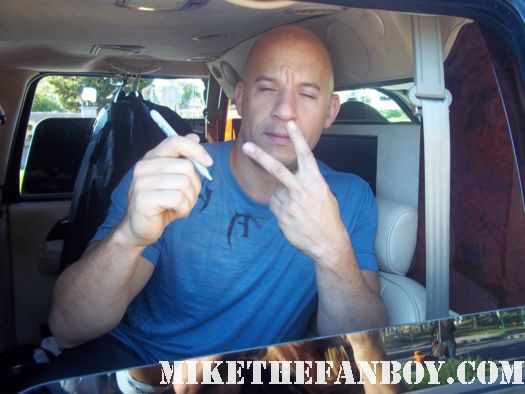 I admire enthusiasm, I really do, sigh… So, when CB says something like “There are only three people I hold higher than Vin Diesel… Paul Walker, Johnny Depp and Christian Bale.” I just sit back and say to myself… Paul Walker? Only three? But I digress, I know what a huge fan of the Fast and Furious Films CB is, so I give him a pass… If he gets a Pacifier poster signed though, it’s all over… I will make fun of him for decades… And yes, I’ve plotted that out! Lol…

NANANANANANANANAN CB, CB, CB! Your favorite mikethefanboy.com contributor is back in action. Today, I am going for the awesome, talented, kick ass actor Vin Diesel.

(Editor’s Note: While we appreciate his enthusiasm Mikethefanboy takes no responsibility for CB’s favorites, his taste in movies, his taste in actors, or any of the below or above! M-)

He was in Saving Private Ryan, Boiler Room (one of my favorite movies), Pitch Black, Fast Furious 1 and 4, XxX, and The Pacifier. Go see A Man Apart, it was great. (CB Note: Go see Fast Five TOO!) He’s doing a television show appearance and I hold him up there with my top five favorites. There are only three people I hold higher than Vin Diesel, Paul Walker, Johnny Depp and Christian Bale. I have this poster from Fast Four and my DVD cover from Fast and Furious that I got Michelle Rodriguez to sign at the Battle LA premiere, so I’m trying to get him to sign those two items. I also have a picture. Anyways, I’m armed and ready to roll. Click in your seat belt and hold tight for the action packed write up that is CB….When Vin Diesel does push-ups, he actually pushes the earth down! If you spell Vin Diesel backwards you get Vin Diesel. IF you get LESEID NIV you did it wrong!

(Editor’s Note: I have so many comments I just can’t write them down, I just… God bless CB! LOL… M-)

3:50: We See Vin Diesel’s SUV and he’s running late, and goes right in. Dang it! Have to wait in the blistering heat!

5:30: Vin Diesel is leaving. God, I hope he stops. I’m feeling like a rotisserie chicken. We patiently wait for his limo to roll up, and guess what, he pulls right over, rolls the window down and says, “HI GUYS!” 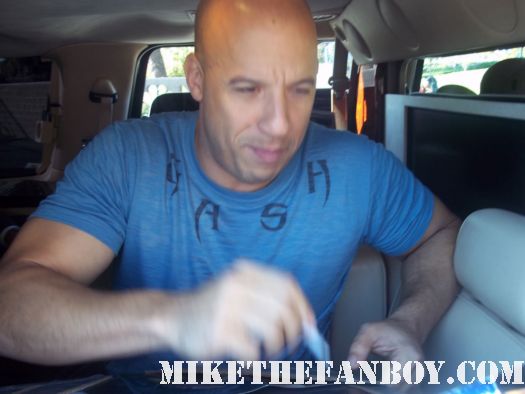 Such a nice guy. I’m a genuine fan and he really liked hearing what I had to say. He took the time out to sign my poster, DVD cover and photo. 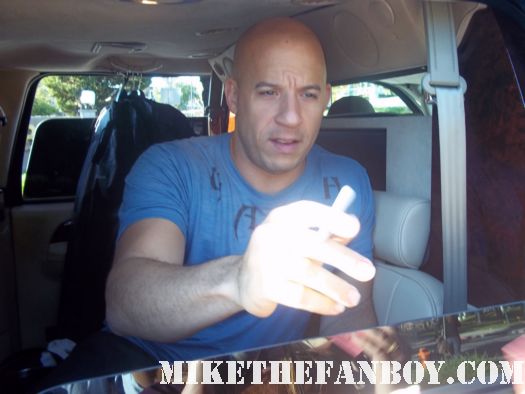 I couldn’t have asked for a better day. Thanks Vin Diesel and go See Fast FIVE! Until next time, same CB hour, same CB channel and same CB blog. KAPPOOOOW! 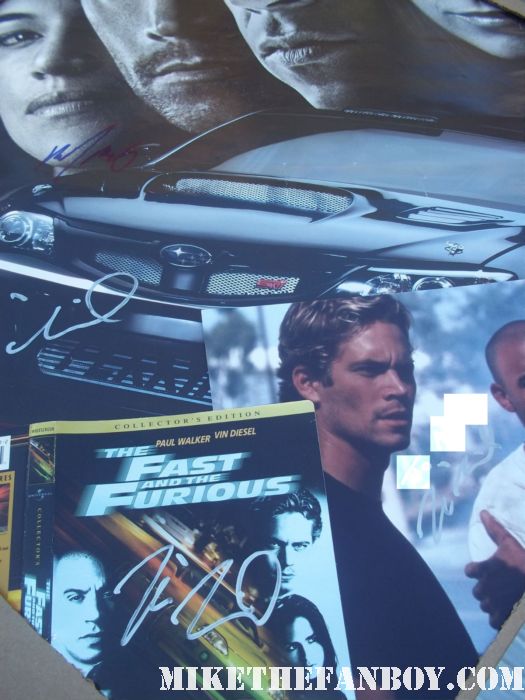