Home / Book Beat • Book Reviews • The Lovely Erica / Book Beat quick takes on City of Brass, You Bring the Distant Near and more!

After a super crazy book release day on November 7th, the rest of the year seems calm in comparison! In this Book Beat, I still have a couple of terrific books worthy of adding to your shopping list!

City of Brass by S.A. Chakraborty 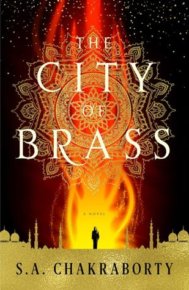 Pitch: Excellent fantasy debut which started off as historic fanfiction

Story: “Nahri has never believed in magic. Certainly, she has power; on the streets of 18th century Cairo, she’s a con woman of unsurpassed talent. But she knows better than anyone that the trade she uses to get by—palm readings, zars, healings—are all tricks, sleights of hand, learned skills; a means to the delightful end of swindling Ottoman nobles.

But when Nahri accidentally summons an equally sly, darkly mysterious djinn warrior to her side during one of her cons, she’s forced to accept that the magical world she thought only existed in childhood stories is real. For the warrior tells her a new tale: across hot, windswept sands teeming with creatures of fire, and rivers where the mythical marid sleep; past ruins of once-magnificent human metropolises, and mountains where the circling hawks are not what they seem, lies Daevabad, the legendary city of brass–a city to which Nahri is irrevocably bound.

In that city, behind gilded brass walls laced with enchantments, behind the six gates of the six djinn tribes, old resentments are simmering. And when Nahri decides to enter this world, she learns that true power is fierce and brutal. That magic cannot shield her from the dangerous web of court politics. That even the cleverest of schemes can have deadly consequences.”

Quick take: Magical and hypnotic with a gorgeous setting and fascinating world. There’s so many unexpected and original moments that the book doesn’t fail to surprise. I can’t wait for the next book into series, Kingdom of Copper!

You Bring the Distant Near by Mitali Perkins 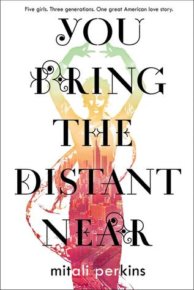 Story: “Five girls. Three generations. One great American love story. You Bring the Distant Near explores sisterhood, first loves, friendship, and the inheritance of culture–for better or worse. Ranee, worried that her children are losing their Indian culture; Sonia, wrapped up in a forbidden biracial love affair; Tara, seeking the limelight to hide her true self; Shanti, desperately trying to make peace in the family; Anna, fighting to preserve Bengal tigers and her Bengali identity–award-winning author Mitali Perkins weaves together a sweeping story of five women at once intimately relatable and yet entirely new.”

Quick take: It’s a lovely, heart-warming story about several generations of women as the family moves across the world. It’s a terrific story about acculturation with lots of rich details about traditions and how they get lost or changed by the next generation. Even though this touches on a lot of tough subjects, the writing feels light while still making its point elegantly.

Not Now, Not Ever by Lily Anderson 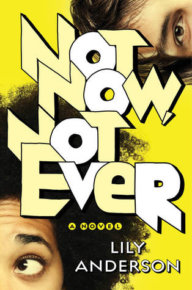 Pitch: A touch of The Importance of Being Earnest at a summer camp for brainy teens

Story: “The sequel to The Only Thing Worse than Me Is You, inspired by The Importance of Being Earnest.

Elliot Gabaroche is very clear on what she isn’t going to do this summer.

1. She isn’t going to stay home in Sacramento, where she’d have to sit through her stepmother’s sixth community theater production of The Importance of Being Earnest.
2. She isn’t going to mock trial camp at UCLA.
3. And she certainly isn’t going to the Air Force summer program on her mother’s base in Colorado Springs. As cool as it would be to live-action-role-play Ender’s Game, Ellie’s seen three generations of her family go through USAF boot camp up close, and she knows that it’s much less Luke/Yoda/’feel the force,’ and much more one hundred push-ups on three days of no sleep. And that just isn’t appealing, no matter how many Xenomorphs from Alien she’d be able to defeat afterwards.

What she is going to do is pack up her attitude, her favorite Octavia Butler novels, and her Jordans, and go to summer camp. Specifically, a cutthroat academic-decathlon-like competition for a full scholarship to Rayevich College, the only college with a Science Fiction Literature program. And she’s going to start over as Ever Lawrence, on her own terms, without the shadow of all her family’s expectations. Because why do what’s expected of you when you can fight other genius nerds to the death for a shot at the dream you’re sure your family will consider a complete waste of time?

This summer’s going to be great.”

Quick take: This isn’t a re-telling of The Importance of Being Earnest but more of a tribute with a few nods to the original play and lots of loving quotes. It’s fun and really hits its stride once Elliot gets to camp. As a bonus, this is a valentine to science fiction lovers with special love for Ocfavia Butler.

Into the Black by Ava Jae 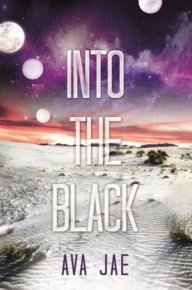 Pitch: The sequel to Beyond the Red, an inclusive science fiction series

Story: “The world ruler is dead, technology foundational to their society destroyed, and Safara is on the brink of collapse. Half-human, half-alien Eros is the rightful heir to the world throne, but before he can return to the capital, he’s abducted by a rebel group of humans who call themselves The Remnant–and won’t release him until he swears to help them overthrow the very government he’s inheriting. With Eros missing, ex-queen Kora is determined to stave off mad grabs for the throne. But as royalty from across the territories flock to the capital, and a new charismatic candidate takes the spotlight, Kora sets off into the desert with a skilled prince-turned-bounty hunter to find Eros before it’s too late for both the future king and his kingdom.”

Quick take: A worthy follow up to Beyond the Red with a balance between action and featuring diverse characters. In this installment, there’s a very big change for Kora and more LGBTQIA+ characters. It’s great to see so much diversity so extra points for that.

I Never by Laura Hopper 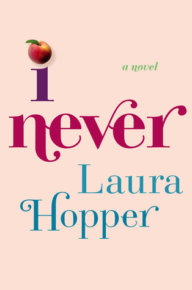 Pitch: A breezy read about the emotions of first love/sex.

Story: “Janey King’s priorities used to be clear: track, school, friends, and family. But when seventeen-year-old Janey learns that her seemingly happy parents are getting divorced, her world starts to shift. Back at school, Luke Hallstrom, an adorable senior, pursues Janey, and she realizes that she has two new priorities to consider: love and sex.

Inspired by Judy Blume’s classic Forever, I Never features a perfect, delicious, almost-to-good-to-be-true high school relationship . . . and it doesn’t shy away from the details. Destined to be passed from teen to teen, this is a young adult debut that will get readers talking.”

Quick take: I Never does a good job of capturing some of the insecurities and intoxication of first love and for being sex positive with some pretty graphic descriptions for YA. It’s very focused on the love story so the plot is pretty straightforward and so are some of the side characters.

Ramses the Damned: The Passion of Cleopatra by Anne Rice & Christopher Rice 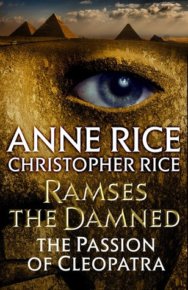 Pitch: The sequel to The Mummy

Story: “Ramses the Great, former pharaoh of Egypt, is reawakened by the elixir of life in Edwardian England. Now immortal with his bride-to-be, he is swept up in a fierce and deadly battle of wills and psyches against the once-great Queen Cleopatra. Ramses has reawakened Cleopatra with the same perilous elixir whose unworldly force brings the dead back to life. But as these ancient rulers defy one another in their quest to understand the powers of the strange elixir, they are haunted by a mysterious presence even older and more powerful than they, a figure drawn forth from the mists of history who possesses spectacular magical potions and tonics eight millennia old. This is a figure who ruled over an ancient kingdom stretching from the once-fertile earth of the Sahara to the far corners of the world, a queen with a supreme knowledge of the deepest origins of the elixir of life. She may be the only one who can make known to Ramses and Cleopatra the key to their immortality—and the secrets of the miraculous, unknowable, endless expanse of the universe.”

Quick take: I haven’t read her books for at least a decade, but I was very curious about a return to The Mummy which is one of my favorite of hers. It’s a direct continuation of that book, but it’s very much in her later style so instead of being a fun thriller, it tries to get deep into some issues about faith and uses an ancient civilization to provide explanation and new conflict. Eh, it tends to drone on a bit so I skimmed some sections that went on and on. If you like her most recent books, this may be more up your alley, but it wasn’t what I was hoping for.

Thanks to Harper Voyager (City of Brass), Macmillan (You Bring the Distant Near, Not Now, Not Ever), Sky Pony Press (Into the Black), HMH (I Never) and Random House (Ramses the Damned: The Passion of Cleopatra) for providing the books for review. Want more details on my impression of these and other books? Check out my ratings and full reviews at Goodreads. 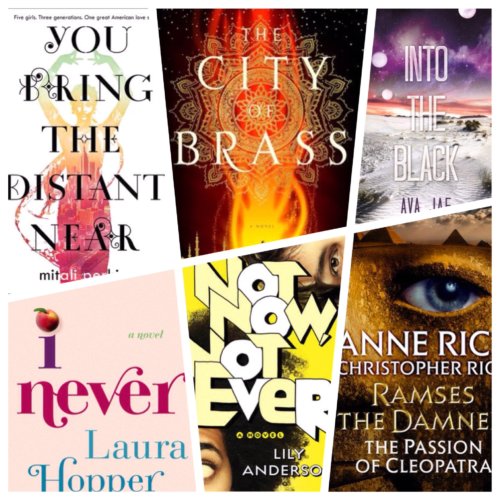