This is a rare edition of Book Beat — every book has the same release date and, more importantly, every book is a winner! Usually there are a few books that weren’t right for me, but I really enjoyed each of these books. Yeah!

Since your wallet is going to feel the big hurt on November 7th, pre-order now and get some bonus goodies to ease the pain! There’s still time to purchase an earn various gifts including signed bookplates, exclusive short stories, buttons and more. Click on the link for each book for specifics and purchasing links. 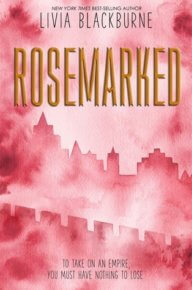 Pitch: A riveting and smart non-magical fantasy with unique takes on spy stories and love triangles

Quick take: A complex world and a story with interesting twists to create a very original spy story/romance. One of my favorite this year! Definitely looking forward to reading the next book in the series.

Author Livia Blackburn is hosting a giveaway for a signed book and some other goodies so click here to enter!

If you don’t want to press your luck, pre-order a copy and send a copy of proof of purchase for some thank you goodies.

This Mortal Coil by Emily Suvada 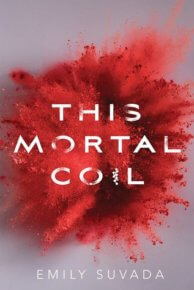 Pitch: A science fiction thriller with emphasis on the science

Story: “Catarina Agatta is a hacker. She can cripple mainframes and crash through firewalls, but that’s not what makes her special. In Cat’s world, people are implanted with technology to recode their DNA, allowing them to change their bodies in any way they want. And Cat happens to be a gene-hacking genius.

That’s no surprise, since Cat’s father is Dr. Lachlan Agatta, a legendary geneticist who may be the last hope for defeating a plague that has brought humanity to the brink of extinction. But during the outbreak, Lachlan was kidnapped by a shadowy organization called Cartaxus, leaving Cat to survive the last two years on her own.

When a Cartaxus soldier, Cole, arrives with news that her father has been killed, Cat’s instincts tell her it’s just another Cartaxus lie. But Cole also brings a message: before Lachlan died, he managed to create a vaccine, and Cole needs Cat’s help to release it and save the human race.

Now Cat must decide who she can trust: The soldier with secrets of his own? The father who made her promise to hide from Cartaxus at all costs? In a world where nature itself can be rewritten, how much can she even trust herself?”

Quick take: Prepare for tons of action, twists and turns in this futuristic dystopian. There’s a lot of fascinating thought into the science that powers this distinctive world, but it’s not so convoluted that you can’t follow it. The characters and the story are also strong and the ending also keeps twisting with new surprises for a great start to a new series.

Author Emily Suvada is also offering some thank you goodies for pre-orders which you can read about here. 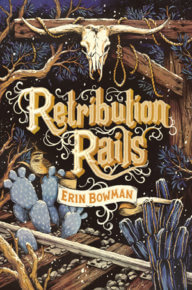 Pitch: A Western that feels fresh and modern

When Reece Murphy is forcibly dragged into the Rose Riders gang because of a mysterious gold coin in his possession, he vows to find the man who gave him the piece and turn him over to the gang in exchange for freedom. Never does he expect a lead to come from an aspiring female journalist. But when Reece’s path crosses with Charlotte Vaughn after a botched train robbery and she mentions a promising rumor about a gunslinger from Prescott, it becomes apparent that she will be his ticket to freedom—or a noose. As the two manipulate each other for their own ends, past secrets are unearthed, reviving a decade-old quest for revenge that may be impossible to settle.

In this thrilling companion to Vengeance Road, dangerous alliances are formed, old friends meet new enemies, and the West is wilder than ever.”

Quick take: Great characters, a brisk pace with a fully developed setting, Retribution Rails is a riveting adventure. This is a Western and I wouldn’t normally say I love Westerns, but this book feels fresh and modern with feisty women and men who can feel emotions. While you don’t need to read Vengeance Road to enjoy Retribution Rails, there are spoilers since some characters play a significant role.

If you reckon on pre-ordering, send your proof in! 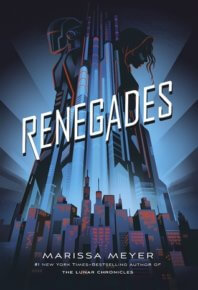 Pitch: Superheroes and supervillains, but which is which?

The Renegades are a syndicate of prodigies—humans with extraordinary abilities—who emerged from the ruins of a crumbled society and established peace and order where chaos reigned. As champions of justice, they remain a symbol of hope and courage to everyone…except the villains they once overthrew.

Nova has a reason to hate the Renegades, and she is on a mission for vengeance. As she gets closer to her target, she meets Adrian, a Renegade boy who believes in justice—and in Nova. But Nova’s allegiance is to a villain who has the power to end them both.”

Quick take: I was disappointed in Heartless, but Renegades is a promising launch to a new series with a fun new world, interesting dynamics for a double agent and imaginative super powers. The story takes a bit of set up before it gets going and then we get to the good stuff with lots of layers, subplots and hints of what’s to come in this new series.

Like shiny buttons? Readers who pre-order get a set of buttons representing one of the factions in Renegades.

The Becoming of Noah Shaw by Michelle Hodkin 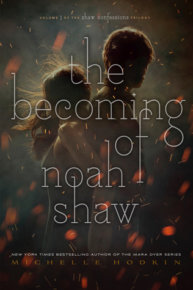 Pitch: The dark start of a new companion series to the Mara Dyer trilogy

Story: “In the first book of The Shaw Confessions, the companion series to the New York Times bestselling Mara Dyer novels, old skeletons are laid bare and new promises prove deadly. This is what happens after happily ever after.

Everyone thinks seventeen-year-old Noah Shaw has the world on a string.

Mara Dyer is the only one he trusts with his secrets and his future.

And both are scared that uncovering the truth about themselves will force them apart.

Quick take: We return to these characters and this crazy conspiracy world in a new vein since it’s from Noah’s smart, wry, rebellious mindset. If you enjoyed the first series, then you will be prepared for a dark and violent book. If not, the author’s caveat emptor surely warns readers. This isn’t quite as psychologically freaky as the first books, but there are plenty of mind games and lots of conspiracy to dig through.

The Speaker by Traci Chee 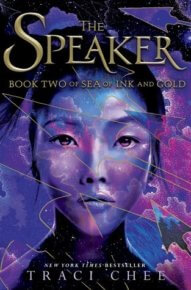 Pitch: If you enjoyed The Reader then you’ll enjoy The Speaker, the second book in this fantasy series where books and reading have been nearly eliminated

Story: “Having barely escaped the clutches of the Guard, Sefia and Archer are back on the run, slipping into the safety of the forest to tend to their wounds and plan their next move. Haunted by painful memories, Archer struggles to overcome the trauma of his past with the impressors, whose cruelty plagues him whenever he closes his eyes. But when Sefia and Archer happen upon a crew of impressors in the wilderness, Archer finally finds a way to combat his nightmares: by hunting impressors and freeing the boys they hold captive.

With Sefia’s help, Archer travels across the kingdom of Deliene rescuing boys while she continues to investigate the mysterious Book and secrets it contains. But the more battles they fight, the more fights Archer craves, until his thirst for violence threatens to transform him from the gentle boy Sefia knows to a grim warrior with a cruel destiny. As Sefia begins to unravel the threads that connect Archer’s fate to her parents’ betrayal of the Guard so long ago, she and Archer must figure out a way to subvert the Guard’s plans before they are ensnared in a war that will pit kingdom against kingdom, leaving their future and the safety of the entire world hanging in the balance.”

Quick take: The Sea of Ink and Gold series takes its time so read this if you want a fantasy with a more luxurious pace. The Speaker seamlessly continues Sefia and Archer’s story with some additional characters and we get deeper into The Guard. The story wanders a bit, but then sharpens up as we head into the next book in the series.

There are some nice pre-order gifts if you purchase from specifics indie bookstores. Details are here!

Thanks to Disney (Rosemarked), Simon & Schuster (This Mortal Coil, The Becoming of Noah Shaw), HMH (Retribution Rails), Macmillan (Renegades) and Penguin (The Speaker) for providing the books for review. Want more details on my impression of these and other books? Check out my ratings and full reviews at Goodreads. 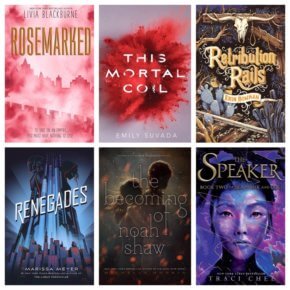