September is a busy month for new books with tons of new releases! We’re headed into fall which may be why there are quite a few books with witches or other supernatural entities in this edition of Book Beat. This is also a diverse crop of books with several Latina main characters and a few LGBT titles. Yeah for diversity!

As I Descended by Robin Tally 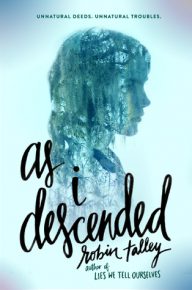 Story: “Maria Lyon and Lily Boiten are their school’s ultimate power couple—even if no one knows it but them.

Only one thing stands between them and their perfect future: campus superstar Delilah Dufrey.

Golden child Delilah is a legend at the exclusive Acheron Academy, and the presumptive winner of the distinguished Cawdor Kingsley Prize. She runs the school, and if she chose, she could blow up Maria and Lily’s whole world with a pointed look, or a carefully placed word.

But what Delilah doesn’t know is that Lily and Maria are willing to do anything—absolutely anything—to make their dreams come true. And the first step is unseating Delilah for the Kingsley Prize. The full scholarship, awarded to Maria, will lock in her attendance at Stanford―and four more years in a shared dorm room with Lily.

Maria and Lily will stop at nothing to ensure their victory—including harnessing the dark power long rumored to be present on the former plantation that houses their school.

But when feuds turn to fatalities, and madness begins to blur the distinction between what’s real and what is imagined, the girls must decide where they draw the line.

From acclaimed author Robin Talley comes a Shakespeare-inspired story of revenge and redemption, where fair is foul, and foul is fair.”

Quick take:  Author Robin Talley has a great writing style and moves the story swiftly and with plenty of eerie and spooky moments. The story is updated with a diverse cast of lesbians and Latinos/as, and Macbeth’s themes of power and corruption run just as true in this new prep school setting. The story is very recognizably Macbeth, but with its own heartbeat and its own, satisfying resolution.

The Reader by Traci Chee 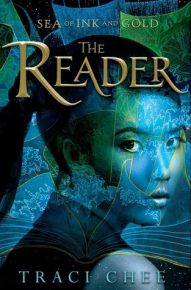 Pitch: YA fantasy where everyone is illiterate

Story: “Sefia knows what it means to survive. After her father is brutally murdered, she flees into the wilderness with her aunt Nin, who teaches her to hunt, track, and steal. But when Nin is kidnapped, leaving Sefia completely alone, none of her survival skills can help her discover where Nin’s been taken, or if she’s even alive. The only clue to both her aunt’s disappearance and her father’s murder is the odd rectangular object her father left behind, an object she comes to realize is a book—a marvelous item unheard of in her otherwise illiterate society. With the help of this book, and the aid of a mysterious stranger with dark secrets of his own, Sefia sets out to rescue her aunt and find out what really happened the day her father was killed—and punish the people responsible.”

Quick take: An interesting world with a lot of depth and many, many layers to peel back for future books in the series. Extra points for diverse characters, though their ethnicity is really incidental to the plot. There’s a lot of promise for this debut author with a series with the potentia lfor this series to be really epic.

Kingdom of Ash and Briars by Hannah West 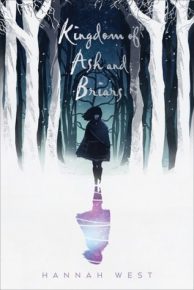 Pitch: A fantasy/fairy tale that mashes up Cinderella, Sleeping Beauty and the legend of Mulan

Story: “Bristal, an orphaned kitchen maid, lands in a gritty fairy tale gone wrong when she discovers she is an elicromancer with a knack for shape-shifting. An ancient breed of immortal magic beings, elicromancers have been winnowed down to merely two – now three – after centuries of bloody conflict in the realm. Their gifts are fraught with responsibility, and sixteen-year-old Bristal is torn between two paths. Should she vow to seek the good of the world, to protect and serve mortals? Or should she follow the strength of her power, even if it leads to unknown terrors? She draws on her ability to disguise herself as a man to infiltrate a prince’s band of soldiers, and masquerades as a fairy godmother to shield a cursed princess, but time is running out. As an army of dark creatures grows closer, Bristal faces a supernatural war. To save the kingdoms, Bristal must find the courage to show her true form.

Quick take: I enjoyed this tale of Bristal who becomes an elicromancer and basically becomes the fairy godmother in several fairy tales while having some adventures of her own. There’s lots of cool world-building and character struggles that make for a great adventure. There is a bit of romance in the book, but it isn’t a huge focus and not really well-developed (but satisfying nonetheless). 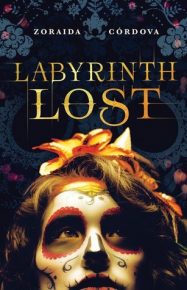 Story: “Nothing says Happy Birthday like summoning the spirits of your dead relatives.

Alex is a bruja, the most powerful witch in a generation…and she hates magic. At her Deathday celebration, Alex performs a spell to rid herself of her power. But it backfires. Her whole family vanishes into thin air, leaving her alone with Nova, a brujo boy she can’t trust. A boy whose intentions are as dark as the strange marks on his skin.

The only way to get her family back is to travel with Nova to Los Lagos, a land in-between, as dark as Limbo and as strange as Wonderland…”

Quick take: I love the vibe of this book with its Latina main character which makes Labyrinth Lost feel unique. Although I don’t feel that all the characters are fully fleshed out, the story moves swiftly with fantastical imagery which makes this a good adventure story with added flair.

The Graces by Laure Eve 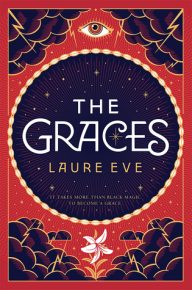 Pitch: Witches are the cool kids in town

Story: “In The Graces, the first rule of witchcraft states that if you want something badly enough, you can get it . . . no matter who has to pay.

Everyone loves the Graces. Fenrin, Thalia, and Summer Grace are captivating, wealthy, and glamorous. They’ve managed to cast a spell over not just their high school but also their entire town—and they’re rumored to have powerful connections all over the world. If you’re not in love with one of them, you want to be them. Especially River: the loner, new girl at school. She’s different from her peers, who both revere and fear the Grace family. She wants to be a Grace more than anything. And what the Graces don’t know is that River’s presence in town is no accident.

This fabulously addictive fantasy combines sophisticated and haunting prose with a gut-punching twist that readers will be dying to discuss. Perfect for fans of We Were Liars as well as nostalgic classics like Buffy the Vampire Slayer and the 1996 movie The Craft, The Graces marks the beginning of a new wave of teen witches.”

Quick take: There’s an interesting story somewhere in this book, but the characters don’t really earn their reputations. (A lot of tell, not so much show.) The plot takes its own sweet time to move along to the big twist. This is a start to a series which has a potential to go interesting places, if the reader feels like they are invested enough with the characters. 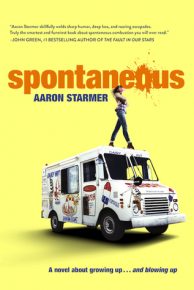 Katelyn is the first, but she won’t be the last teenager to blow up without warning or explanation. As the seniors continue to pop like balloons and the national eye turns to Mara’s suburban New Jersey hometown, the FBI rolls in and the search for a reason is on.

Whip-smart and blunt, Mara narrates the end of their world as she knows it while trying to make it to graduation in one piece. It’s an explosive year punctuated by romance, quarantine, lifelong friendship, hallucinogenic mushrooms, bloggers, ice cream trucks, “Snooze Button™,” Bon Jovi, and the filthiest language you’ve ever heard from the President of the United States.

Aaron Starmer rewrites the rulebook with Spontaneous. But beneath the outrageous is a ridiculously funny, super honest, and truly moving exemplar of the absurd and raw truths of being a teenager in the 21st century . . . and the heartache of saying goodbye.”

Quick take: Snarky and frank, this is an amusing book, well as amusing as it can be with a sizable body count of high school students. If you’re looking for a snarky, light(ish) story, then this is a fun read with its odd mix of humor and death. I didn’t click with this one, but if that snark is what you’re looking for, then you may like this more than I did.

Thanks to HarperTeen (As I Descended), Penguin Teen (The Reader, Spontaneous), Holiday House (Kingdom of Ash and Briars), Sourcebooks (Labyrinth Lost) and Abrams (The Graces) for providing the books for review. Want more details on my impression of these and other books? Check out my ratings and full reviews at Goodreads.