I just got back from The Captain Marvel Fan Event in Singapore and let’s just say that the experience wasn’t as sweet as I, or most fans, expected it to be. We’ve had a few red carpet events in Singapore over the years – In 2001, we first experienced Hollywood Red Carpet Mania when Tom Cruise, Penelope Cruz and Cameron Crowe hit town for the premiere of Vanilla Sky. Cruise and company spent close to two hours signing for almost everyone on the red carpet. It’s needless to say though the movie wasn’t a hit the red carpet premiere was a smashing success!

Since then Singapore has hosted red carpet events for The Green Hornet, The Amazing Spiderman, X-Men: Days of Future Past, Guardians of the Galaxy, Ghostbusters, The Huntsman: Winter’s War, Captain America: Civil War and Avengers: Infinity War to name a few.

Now, it isn’t always easy getting autographs on these occasions. However one thing is a constant – the stars will always grab some sharpies and scrawl their signatures on posters, pictures and other assorted paraphernalia. But, I fear, that has all changed with yesterday’s Captain Marvel Red Carpet Event in Singapore.

I wasn’t actually going to attend the event. I did not relish the idea of lining up overnight to get red carpet tickets at Marina Bay Sands, which was hosting the event. We were advised to register early to stand the best chance of scoring autographs and selfies. As Singapore was the only Asian stop on the movie’s press junket, scores of ardent autograph collectors from around the region would be jostling for the prime positions along the red carpet. I had no intention of enduring a bruising battering experience for no guarantee of any autographs.

But when a family friend offered Danson and me a pair of passes to the Captain Marvel’s Superfan Box, we jumped at the offer. Now a scoring a pass to the Superfan Box is akin to winning one of Willy Wonka’s golden tickets. Everyone wants one! Superfans don’t have to line up with the general public and they are given a prime location, where minders will usher the stars to sign those all-important autographs.

Now even if you snag passes to this exclusive area, you’ll have to arrive at least two hours before the event to ensure the best possible chance of getting your items signed. Then you have to make sure you stand apart from the rest of the Superfans. As it was Valentine’s Day, we bought bouquets to give to Gemma Chan and Brie Larson.

As we were extra early, Danson and I were the first in line so we claimed a spot in the fan box and waited for the stars to arrive. We positioned ourselves next to Shyam and Alex who had a lugged a Captain America Shield and a full-sized Captain Marvel Poster that they wanted to have autographed. Between their items and our flowers, we were bound to get Gemma and Brie’s attention. OK, the blossoms were wilting by the time we hit the Superfan Box, but the press noticed us and said the two leading ladies would have to come our way. Score! The emcees took to the stage and bantered with the George Tanasijevich, President of Marina Bay Sands and Tom Batchelor of Disney Asia.

Then the directors arrived on the red carpet before deafening screams heralded the arrival of Samuel L. Jackson. As Samuel walked the down the line of reporters, Danson screamed like a banshee, eventually catching his attention. Jackson turned she shushed Danson, indicating he was doing an interview.
Shyam asked a minder if he would be coming over to sign after the interviews but his minder was not sure. Great job, Danson. You blew it, I thought. Now if Jackson wouldn’t sign, I wasn’t sure if the two ladies would. I read of this website that Brie has been a non-signer as of late. 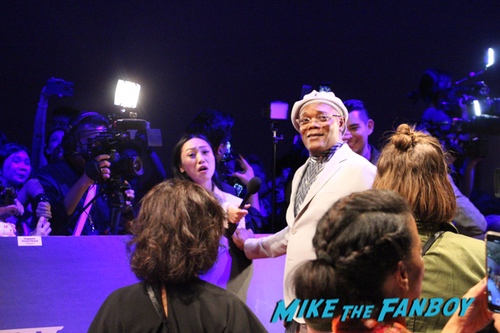 Loud cheers came from the start of the red carpet, Gemma Chan arrived, She deftly juggled taking selfies and signing autographs for frenzied fans. She was stopping for everyone. Good sign!

Then mere minutes later, Brie Larson arrived: carefully coiffed hair, blood-red stained lips, lithe body poured into a black jumpsuit from which fell a cascading train, and pencil-sharp stilettos. Her appearance conjured visions of a vampy Darth Vader. With hands on hips and a pout on lips, she posed with haughty Hollywood glamour as her minder fussed over her. In hindsight her jet-black ensemble was a portent of how the dark the evening would turn out.

A forest of fans stretched their branch-like arms, holding photos, posters, artwork, desperately hoping to be rewarded with her signature scrawl – I mean have you seen it? With her handwriting she should have been a doctor, not an actress! I mean how long would it have for her to sign that autograph of hers, half a second? 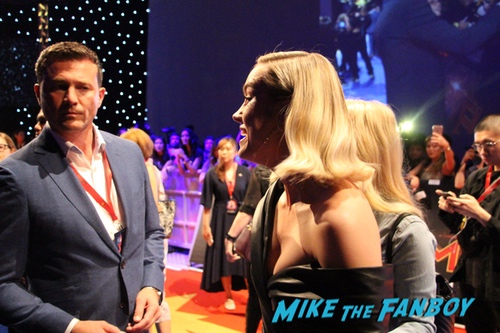 She started grabbing phones and taking selfies, one after another but she wasn’t picking up any sharpies to sign anything. Maybe she’ll do it when she reaches us, I told myself. Then she headed over to the press section and she refused to sign; OK, maybe she did not like the question, I stupidly surmised.

In the mean time, Gemma had reached us and I gave her my flowers for Valentine’s Day. “Thank you,” she smiled sweetly. Then I mentioned a mutual friend. She seemed surprise and said, “Oh, I haven’t seen him this trip,” and we had a short chat before she kindly signed two of my items and I gave her one of my books. (As Valentine’s Day also was international book-giving day). She thanked me again and she was off to make other fans really happy. 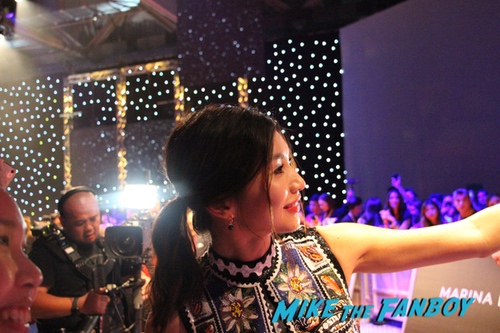 Things were looking up with regards to Samuel. He had finished his press interviews and he strode back to the start of the red carpet and began signing for fans. Yes. He was going to sign.

Brie was rapidly approaching the Superfan Box; she was rapidly approaching us. She’d have to sign for us. I mean we were Superfans, after all. She grabbed Danson’s phone and shot a photo, ignoring the items Danson was hoping to have signed. I held out my Captain Marvel mini poster, she gaze grazed my item. “I don’t sign!” I then held out the flowers wishing her a Happy Valentine’s Day and she shot back. “I’m cannot accept those.” The wilting blooms seemed to wither at her rejection and I’m not joking. 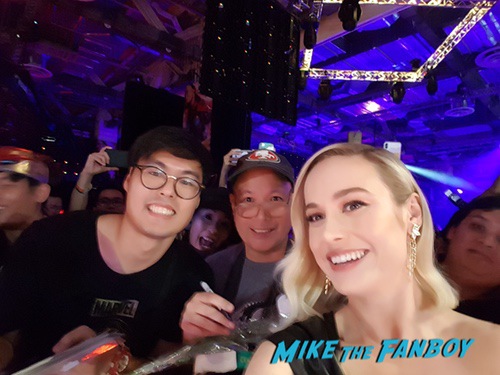 Seriously? SERIOUSLY! She carried on taking photos and smiling like she was having the time of her life. “She’s just going through the motions,” someone said. Then I remembered. “Oh yeah, she’s an actress. She’s good. No wonder she won the Oscar! 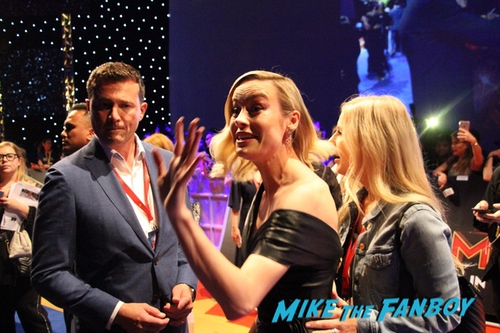 Samuel L Jackson was up next and though he isn’t the fuzziest of personalities, he signed my ‘Glass mini poster. And when I gave him one of my books, he looked at it for a minute; then he looked at me and said. “Thank you.”

The stars then went on stage to talk about the movie. I wasn’t really paying much attention though. 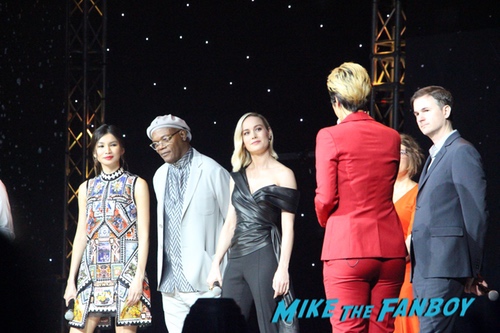 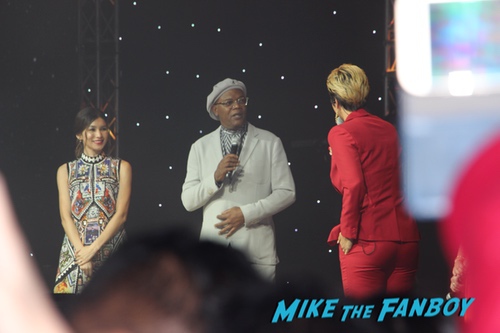 I think most of the autograph collectors there were in shock. It’s understandable If Brie does not want to sign on her private time, that’s her prerogative, but this was at an event promoting her movie in a country where we don’t see Hollywood stars every day and where there isn’t an autograph-selling culture. Fans here collect autographs and don’t sell them.

I don’t understand Brie’s attitude. She entered a career that has afforded her fame, fortune and awards. This event was to promote her movie. Before she achieved her current success she was happy to sign, she wanted to sign but now that she’s on top she says she does not do it anymore. Though not every occasion is autograph appropriate, signing one should be an honor and privilege. It’s a mark of respect and gratitude to people who have supported you. You may not want to sign every day and that’s ok, but to stop entirely is a slap in the face to your fans. After this experience am I going to go watch Captain Marvel? Unlikely, I’ll probably stay home and watch The Marvelous Mrs Maisel. I’d like to think Rachel Brosnahan will appreciate my viewership. 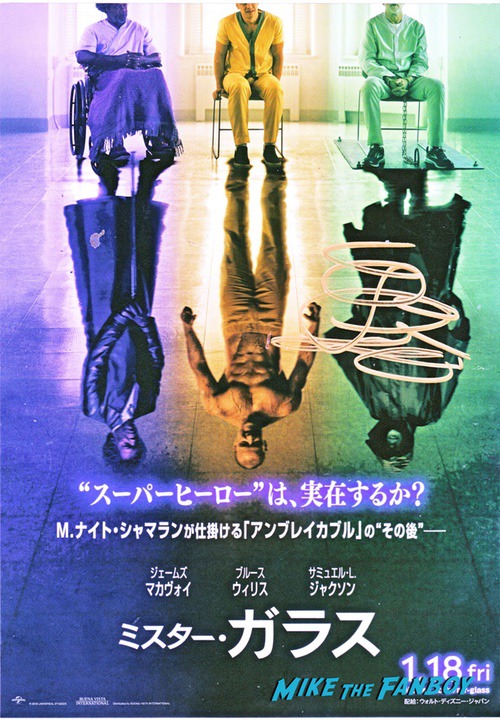 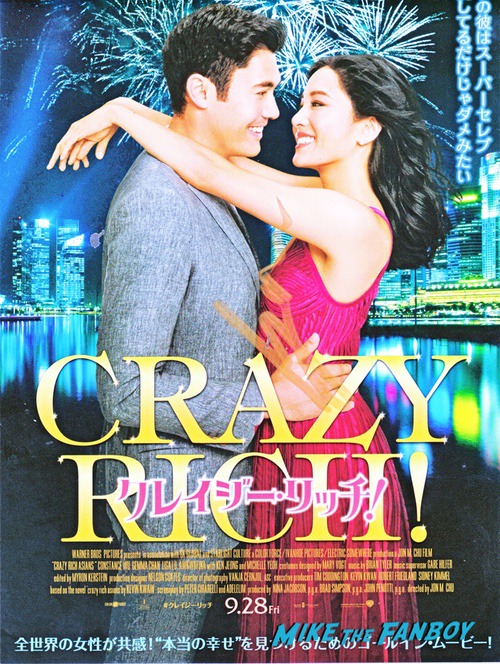 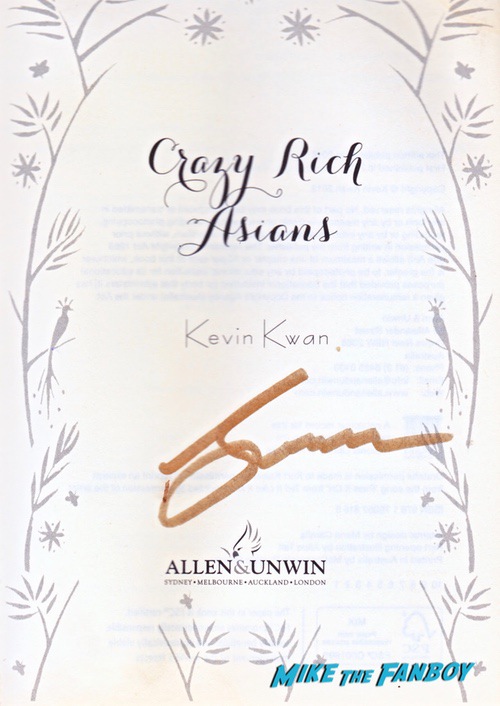