Certain celebrities are always a blast to meet no matter the circumstances. They consistently captivate their fans’ and appreciate fan interactions. Last week I was very fortunate to attend two different Q&A’s with one of my favorite filmmakers, Cameron Crowe, who was promoting the documentary “David Crosby: Remember My Name” with director A.J. Eaton and music icon David Crosby with his signature red wool cap appearing at various screenings throughout the week. 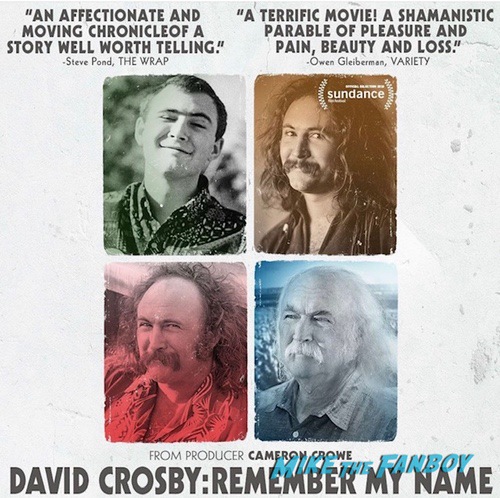 Initially I did not intend on seeing multiple screenings as I bought tickets for one screening with all three when I received a last minute invite with just Cameron Crowe and A.J. Eaton. Before getting any further, “David Crosby: Remember My Name” is one of the most captivating, candid, intimate and intense music documentaries I’ve ever seen. Honestly, Crosby won me over with how honest he spoke without hesitation owning and accepting his life story. Truly, it blew my mind and was definitely an insightful, inspiring and intelligent movie.

At the first Q&A, it was director AJ and Cameron doing a Q&A. I later found out it was apparently the same night as the LA Premiere, which was happening nearby as both AJ and Cameron arrived dressed very sharply. Both AJ and Cameron were very insightful and some highlights were:

-AJ funded the documentary on his own before David started doing solo albums, which Crosby wound up releasing FOUR in four years since filming started.

-One production company would only finance the film if AJ added a rapper as “David Crosby was a has been/not relevant anymore.”

-Cameron Crowe got involved with the movie after AJ met with one of the producers on the film and they were introduced as Cameron was actually in same building. The producer vouched for him and they begin a relationship. 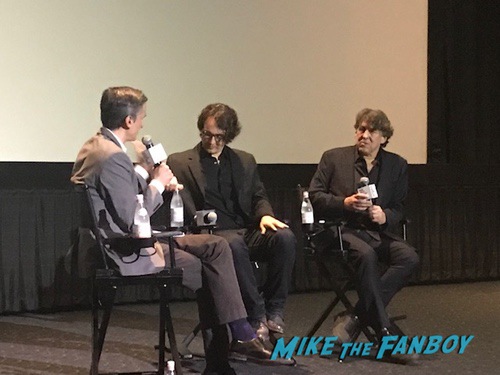 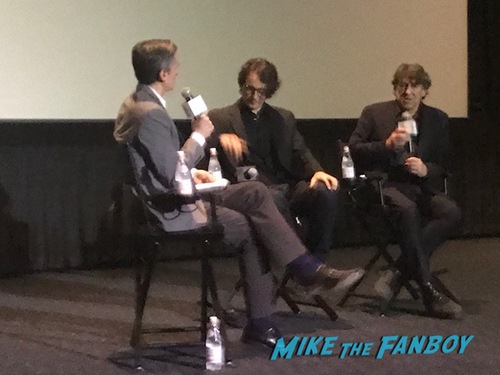 -Initially Cameron was only to conduct a single interview, but soon became a producer and conducted multiple interviews after discussing the project constantly with AJ.

-Like a dog, “David loves to have his ear scratched and adores attention anytime” probably because his father never paid attention to him and loves to be the center of attention. 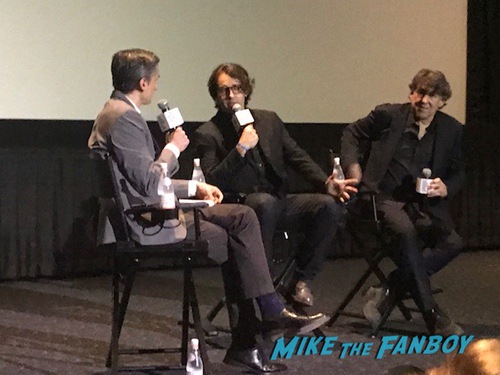 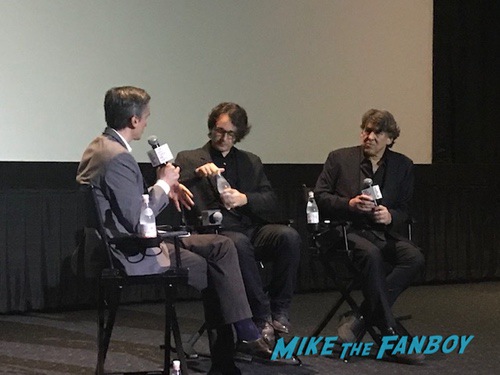 -The filmmakers did not conduct modern interviews with most of his bandmates, especially Graham Nash, Stephen Stills and Neil Young on purpose since they all have overlapping circles and were “aware the documentary was being made.” If they wanted to participate, they knew who to contact and connect, as the filmmakers didn’t want to confront them, which resulted in a more unique music documentary format.

-At Sundance, David Crosby was speechless with the reaction.

Afterwards AJ and Cameron were approached by several fans for autographs with primary focus on Cameron. They started to pull and rush them out despite only a handful of people- like I mentioned earlier they were trying to return back for the event down the street, but that information wasn’t known at the time. Cameron Crowe said he had to go before I had the opportunity and this is key- BRING SOMETHING UNIQUE. As Cameron was leaving and handing back a pen I politely asked, “Mr. Crowe would you please mind signing my copy of ‘Roadies?’ ” Cameron literally stopped dead in his tracks and turned back responding, “Of course I will sign your ‘Roadies’ ”grabbing my silver sharpie in the process.

Cameron started to sign my “Roadies” pressbook LP and I asked him, “I’ve been dying for ‘Roadies’ to be available on a physical format but I can’t understand why it hasn’t been released. When and if will it come out?” Cameron Crowe said, “Write Showtime! That’s the only way it’s going to be released.” He thanked me again for the support and my compliments about the documentary. I believe he signed a few more walking out and Scotty caught him outside. I had another press photo, but didn’t want to press my luck. Later on when I got to my car I realized Cameron partially signed my item TWICE with him starting C-A-M- which was probably when I asked him about the DVD/Blu-ray release. I seriously love it! 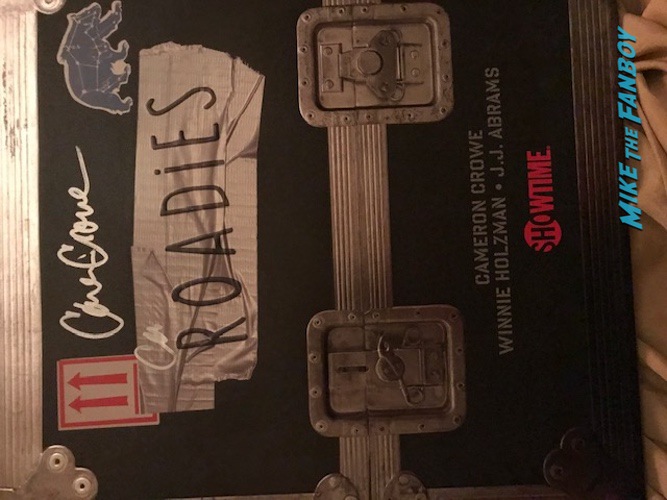 Several days pass and I’m heading to the theater when I hear a very familiar voice on the way to my second screening- its Quentin Tarrantino! After a few people finish talking with him I managed to talk with QT about the New Beverly and his programming choices, which he greatly appreciated before going on my way. Honestly, I went into my screening on Cloud Nine and if I met anyone else that day, it would just be a cherry on top. Once the screening ended, AJ and Cameron were introduced first before David Crosby walked out to a standing ovation. You could tell how much he loved and appreciated the attention, but was still shocked nonetheless with the overwhelming love in the room. David’s humor resonated throughout the Q&A session and you could genuinely tell the love amongst the three answering questions. Since storytelling comes natural to the trio, the audience was only able to ask three questions. Still it was crazy and surreal to see a music icon like him live, especially entertaining the crowd nonstop throughout the Q&A. 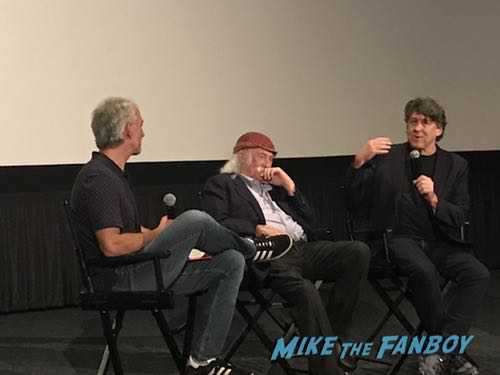 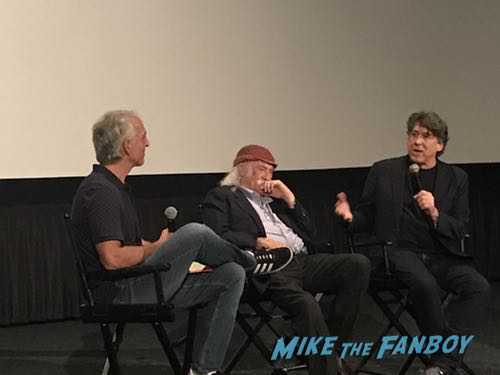 Most of my audience was older and only a handful of people approached once it ended, but the handlers and security immediately escorted everyone out asking out to respect that. I held back knowing Crosby cautiously interacts with fans so I wasn’t surprised and decided to hang out. Luckily I managed to walk out at the perfect time. I approached Crosby, but his handler put up his hand saying “no autographs” when I asked Crosby if he could sign his autobiography. Unfortunately he was walking out with his wife and stone-faced holding her hand walking briskly with tunnel vision. I politely reacted and said, “Thank you very much for sharing your life and being honest. The second time seeing it was even more powerful,” which Crosby turned around with a big smile and looked me in the eyes. Now that’s a cool moment! 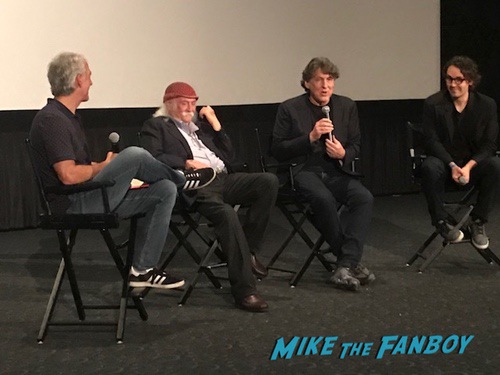 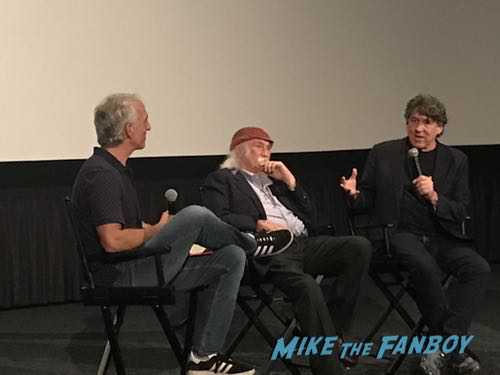 Right around the corner Cameron Crowe came out and after he finished answering a question via “Walking & Talking” I grabbed his attention. He graciously grabbed my press photo of “Almost Famous” without hesitation and signed it discreetly saying, “Let’s not let them see me doing this. They will probably get mad” and I thanked him once again for making such a beautiful movie. And yes, I did mention it was the second time I saw the film, which he loved hearing. Sadly he didn’t examine the description due to time constraints, but he signed an “Almost Famous” press photo when it was simply known as “Untitled Cameron Crowe Project.” 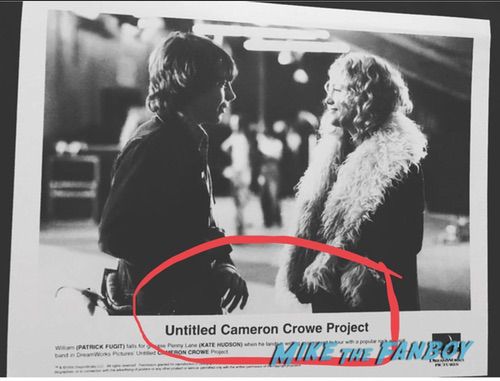 Hilariously enough Cameron signed directly over the Untitled Cameron part perfectly. Overall, it was an absolute blast meeting Cameron Crowe twice in one week with a David Crosby smile and a Quentin Tarrantino conversation to boot. Until the next adventure! 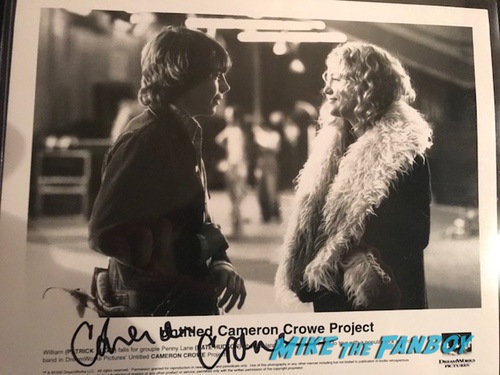