This week I’m in full on prep mode for Wondercon, reviewing the panels, getting my stuff together and putting together my weekend plan. Friday and Saturday are jammed up, it really should be a good time. Sunday though is very, very weak. I’ve gone the past 2 years and in year 1 they had the cast of Fringe and Alcatraz do a signing and a panel then last year it was the cast of Arrow. That along with movie related panels and it was a fun filled relaxing day. This year Sunday looks like a schedule most likely found at a Cleveland convention not LA. I’m very disappointed and hoping they add some stuff between now and then. Maybe some surprises since DC is developing 3 new TV shows The Flash, Gotham and Constantine, it’d be nice to see them there. I guess we’ll find out in a week.

This weeks haul saw some fun books come out, maybe even a couple I could bring with me to get signed. For Marvel we have the new issue of X-Factor, All-New X-Men and the The Ultimates come out. DC only saw World’s Finest released and the independent publishers have Royals, The Wake, Kick-Ass and The Walking Dead. 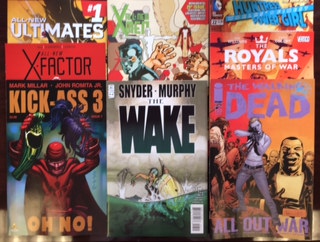 As for my picks of the week it’ll have to be Kick-Ass and Walking Dead. With this being one of the final 2 issues of Kick-Ass it all out gore as Kick-Ass and Hit-Girl are out to wipe out the crime bosses of the east coast. From what I’ve read I don’t know how anyone can make it out alive. 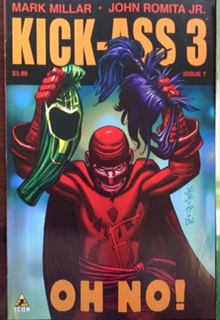 Walking Dead on the other hand just put out chapter 11 of the 12 part All Out War series. Good thing this book is coming out every other week cause I would lose my mind. The couple pages leading up to the last page were one hell of a mind frak. That’ll be one thing I have to look forward to when I get back from LA, the final chapter of All Out War. 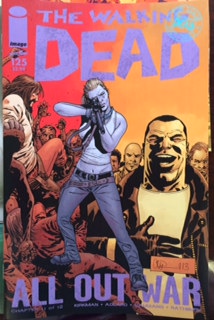 That’s it for now, I hope to see you all at the convention next week!
Jim