It’s September and you know what that means… It’s my birthday month! To celebrate we’re going to be doing several days of giveaways… Wait a minute, I thought I was the one getting presents!

One of my favorite shows is coming to DVD on the actual day of my birth, Silicon Valley! And thanks to the awesome folks at HBO, we have two copies to giveaway on DVD! Woo to the hoo!

“Astute as ever… One of the best comedies on television”- Vulture 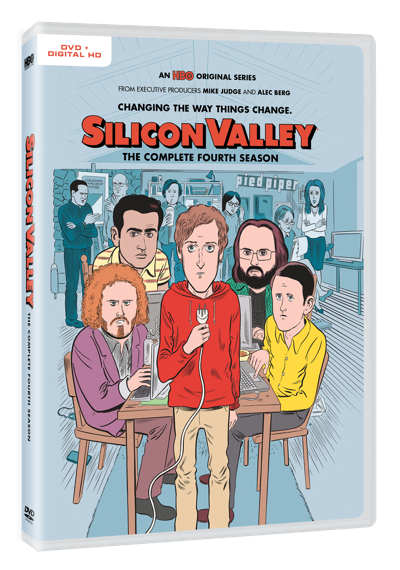 New York, N.Y., July 10, 2017 – ​​The fourth season of Silicon Valley, the “incredibly funny” (Uproxx), Emmy®-nominated HBO comedy series from Mike Judge and Alec Berg, will be available for Digital Download on July 31, 2017, with Blu-ray™ and DVD release date confirmed for September 12, 2017. In the new season of the critically beloved show that probes the ripe-for-comedy world of Silicon Valley, Richard Hendricks (Thomas Middleditch) and his team of socially awkward underdogs continue to claw their way towards tech fame and fortune. Silicon Valley: The Complete Fourth Season on Blu-ray™, DVD and Digital Download features all ten episodes from Season 4, along with three hilarious, never-before-seen deleted scenes.

Change is in the air in Season 4 of Silicon Valley as the Pied Piper guys pursue their video-chat app, PiperChat, but Richard (Thomas Middleditch) has a hard time letting go of his dream to put his algorithm to better use. As Dinesh (Kumail Nanjiani) flirts with notoriety while Gilfoyle (Martin Starr) looks on in amusement, Erlich (T.J. Miller) searches for his next big break, Jared (Zach Woods) attempts to pivot with the company, and Big Head (Josh Brener) enters the world of academia. Over at Hooli, Gavin (Matt Ross) finds himself threatened by Jack Barker (Stephen Tobolowsky), while Monica (Amanda Crew) struggles to bounce back at Raviga after her fallout with Laurie (Suzanne Cryer). Sharp, irreverent and hilarious, Silicon Valley continues to lambast the self-important world of tech in a season that finds the Pied Piper guys looking to leave their mark, even as they continue to fumble along the road to success.

Check out Silicon Valley: The Complete Fourth Season on DVD at Amazon!