Oh Billy Beer! God bless you and your full and manly beard. In fact, I’ve head so much about this night, it’s like I was there. Oh wait, I kind of was, as Billy crashed on my couch. lol.

Billy headed out to meet the incomparable Dakota Fanning. Plus, Billy got a great random encounter with Krysten Ritter! I heart her!

Welcome back to The Great Graphing Outdoors with Billy Beered.  You know, there are some actors and actress that for some reason you just never see.  You know they are out, you’re just never there when they are.  Today (and the day before, I’ll explain) we’re off to a screening and Q & A for the movie Night Moves with the talented Dakota Fanning.  Now, I’ve been doing this Fanboying thing for over 3 years, and for some reason, I have never seen Dakota.  I’ve always thought highly of her as a child actress and am glad she still getting roles as she’s gotten older.

Now I had tried to get her the day before, cause they were screening this move two nights in a row.  For some reason we never saw her come in.   When it came time for exits, I made the mistake of listening to someone who had never even graphed at this location for a Q & A, and SWORE they saw her car.  Yup, totally missed her.  The good thing was, one of my favorites was also out that night at the same spot, Ms Ritter, and I was able to get a couple of signatures and a picture.  Love the B! 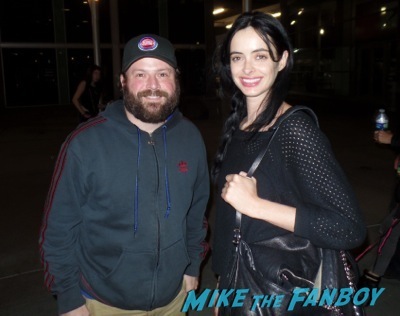 So to avoid this again, I spent the $13 and got a ticket this time.  People told me the night before that she signed, but not long cause there was a problem with the power earlier, and she was running late.

I end up getting a front row seat, and sit down to enjoy the movie.  Dakota was good, but there was way too much of focusing in on Jesse Eisenberg face while he stares off into space.  When it’s over,   They set up the chairs and the Q & A begins.

When it’s over, there’s about 6 of us that approach Dakota for a graph.  After signing a couple, she says she really only wants to sign 1 each.  I had a Terry Richardson pic I really wanted done, and a magazine that Mike actually gave me without the intensions of me getting it signed for HIM.  I tell her I really like the Terry picture, but if she wants to sign both she can.  She smiles, and does them both. 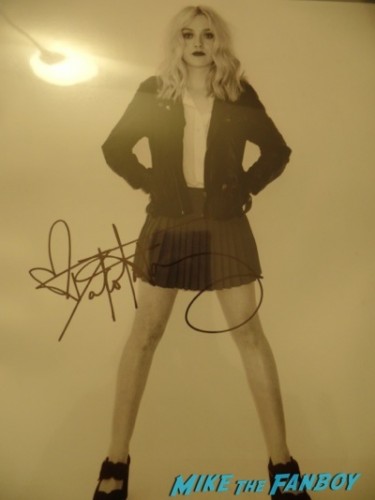 Now after signing about 8-9 graphs total, the publicists are trying to rush her off.  I was still able to get a picture with her (even though it’s a little dark and blurry.  NO, NOT A PHOTO FLOP!)  Well, off to set all my live traps out in the woods.  Till next time 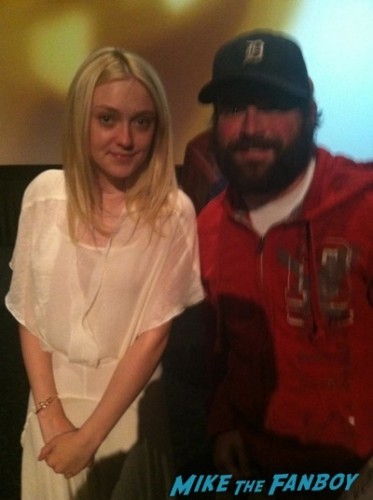