Can I tell you how much I love The Scarlet Starlet! Love her! She braved the blistering cold on the London streets to meet none other than Quentin Tarantino! God bless fangirls! Braving the cold and winters just to meet their favorite celebrities.

Personally, I’m a huge Quentin Tarantino fan and I wish that they had a premiere here in Los Angeles for Django Unchained, but alas that didn’t happen.

So, without further delay check out The Scarlet Starlet’s report on the Django Unchained UK movie premiere!

This report comes to you from an icicle of a fangirl on the cold streets of London town! I usually go into hibernation over winter, and it will take a lot to draw me out for a premiere – but Quentin Tarantino, he’ll just about do it! 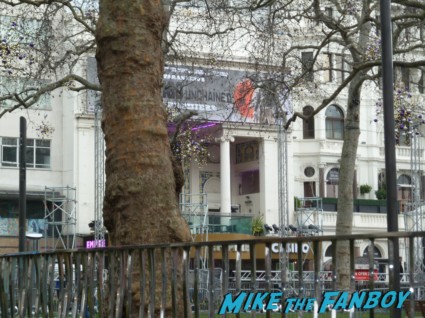 We’re looking at 7 degrees (yes, I know I’ve already told you that it’s cold, but I’m British and therefore am constitutionally compelled to tell you about the weather!), so we’re wrapped up warm, and queueing around a corner with a convenient low wall to sit on, which is an unusual luxury. I’m surprised that construction of the set is ongoing at about 10am, but that should mean it will look pretty good. 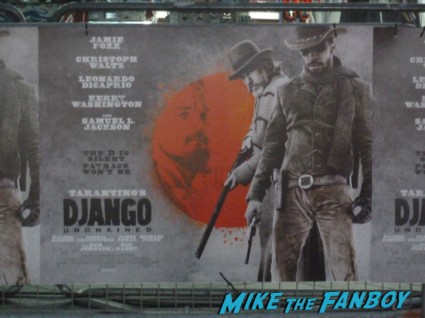 I’m waiting with a friend which is great and certainly makes the time go faster, and the wait more enjoyable! They let us into the fanpens around 2 / 2.30pm – we got the choice of second row alongside the carpet, or a barrier spot in one of the pens around an cross-shaped junction. Hmm…. we took the carpet pen, and managed to even find a gap at the barrier when everyone moved up, which was cool! Then set in to wait again… there is a stage at a right angle to the cinema entrance, with a screen above it, and six screens (one for each letter of Django) behind the carpet fan pens.

It gets quite exciting when they start laying the carpet out (hey, the adrenaline has ebbed again and we need something new to look at!) we’re laying odds on the colour…. none of us are right – its white with a Django picture and logo on it! Coolness! Certainly the most elaborate carpet that I’ve seen! I have to confess that it amuses me when they cover it in plastic until nearer the start time – to ensure it gets no grubby feet marks on it! 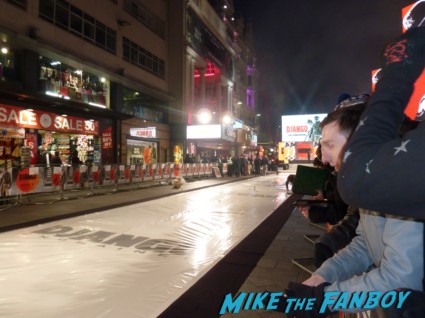 Around 6.15pm we’re getting excited – the arrivals have got to be coming soon! 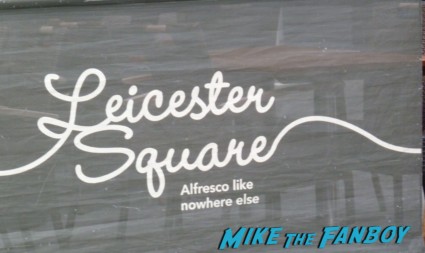 The first car drives to the crossroads…. and its Quentin Tarantino! Let the excitement begin! He’s in a black suit, and heads down one of the arms of the crossroads, presumably starting to sign, although I can’t see. I really really want Quentin’s autograph!

Shortly thereafter another car arrives, and I think in this one is Christoph Waltz. Its seriously only a few minutes before Kerry Washington and Jamie Foxx’s cars pull up as well! And then Samuel L Jackson’s! Kerry is in a gorgeous white dress with a bell-like skirt, and Jamie is wearing an awesomely sharp purple suit – he is really rocking it! 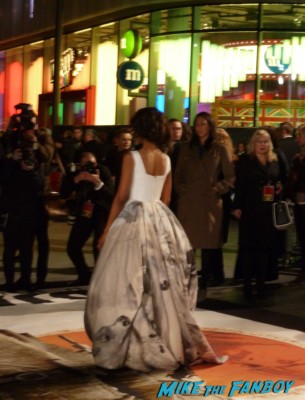 (Although I’ve noticed that you’ll have to take my word for it, as my photos of him are not great!) Everyone is showing up around the same time! 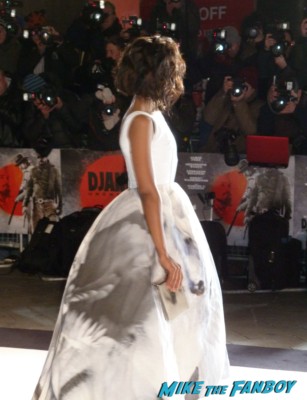 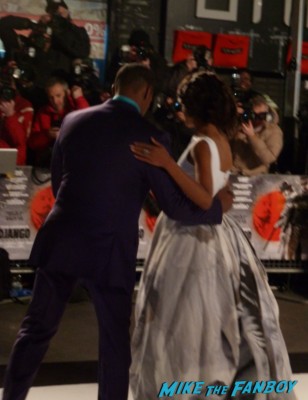 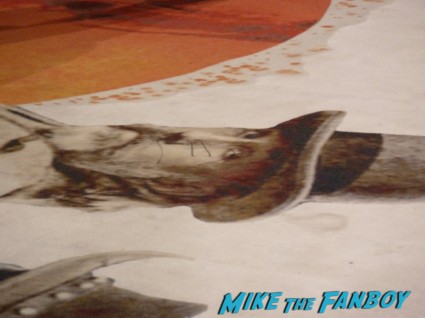 Who is going to end up with that one, I wonder? We’re all calling for him, as he’s taken past us to do interviews. When he’s done we call again as he’s taken back towards the crossroads, but he explains he’s just starting at the top of the barrier, and true to his word he starts at the top and is signing all the way down. 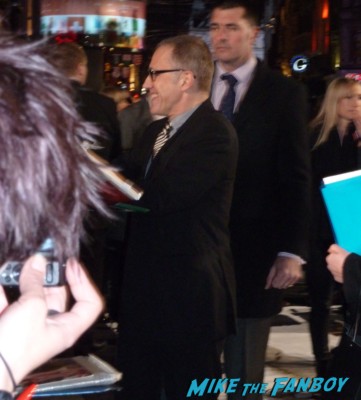 I’ve got stuff layered up on my clipboard, but don’t have an Inglorious cover, or any photos for Christoph to sign, so I’ve got index cards sat on top of my Pulp Fiction DVD cover. 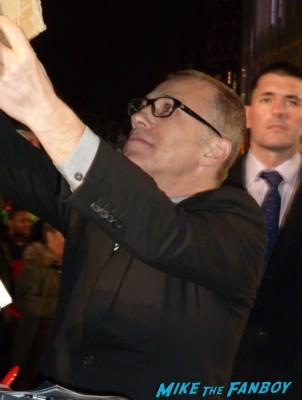 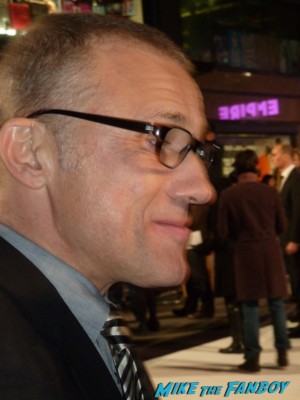 For a moment he’s looking a little perplexed at the Pulp Fiction cover (although I’ve tried to hide it with the card as much as possible), but then he says ‘ah – that’s for Quentin to sign’, and obligingly autographs my index card for me. I make sure to say a big thank you. 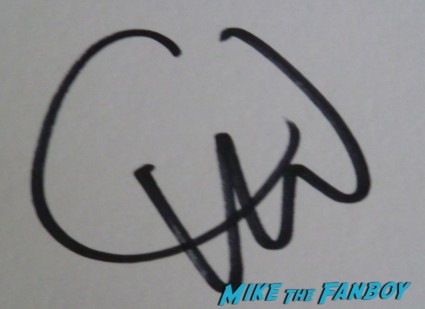 Then its Jamie Foxx on the white carpet; he comes past us to do interviews, and then back across again, as he poses for photos for the photographers in front of us. Then he backs up for ‘a photo with a crowd of fans’. He turns to face us and seems to pause, I’m not sure whether he’s going to sign or not, but then he walks over to the top of the barrier and starts working his way down. Its looking great! I’ve got a ‘Collateral’ cover for him to sign… he signs for the girl next to me, looks at my cover, puts Sharpie to cover…. and then gets distracted? – he moves onto the chap next to me. I try to call him back, frantically get my index cards in case he doesn’t sign Collateral stuff, but its too late and he’s moved on down. Well, I guess you can’t get them all… but that was the closest ‘miss’ I’ve ever had! There are guests on the carpet now, I’m not recognizing lots of them, but that’s okay… Ron Howard arrives, which is pretty awesome, even though he’s not signing. Everything’s going on – I think Kerry Washington has gone up for an interview; Samuel L Jackson has definitely come past us as well. 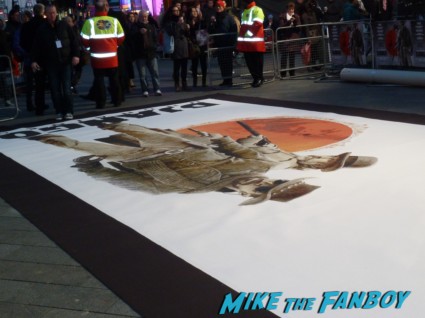 Time is running out, when all of a sudden Quentin Tarantino is on the scene! Awesomeness! He comes and signs right down the barrier, making sure he gets everyone, and exchanging a few words with fans on the way past. 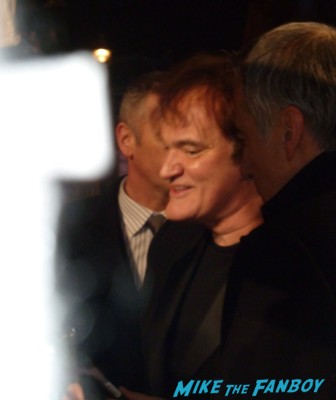 I couldn’t decide whether to get my Pulp Fiction or Kill Bill cover signed, so I put them both on the clipboard (you never know; two would be awesome!), 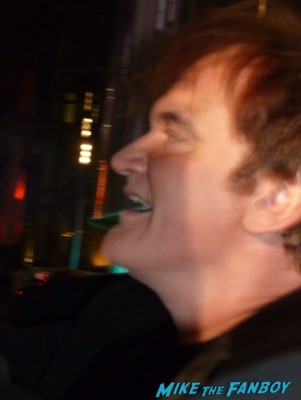 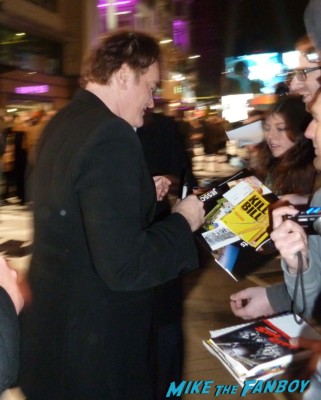 and as he reaches them, Quentin pauses for a moment, then signs the Kill Bill cover. OMLOMLOMLOMLOMLOMLOML!!!! I’m so excited! I got my Tarantino auto!!!

We see Samuel L Jackson start signing a few in the middle of our section of barrier – hopeful he might come back this way… but no, he’s working his way down in the other direction.

All the guests have filed in, and we’re starting thinking about packing up and going home when Tarantino comes on the mike – hot damn! He’s been working the barriers for so long he’s only just gotten around to his interview! Totally glad we didn’t leave before though, as he gave the most fan-friendly address from the microphone that I have ever heard. Well done, sir! We salute you! Its easy to see why he has such a following – his films are stylish and he’s proper fan oriented.

Right, well I’m off to find some warmth and some food! Until next time, guys! 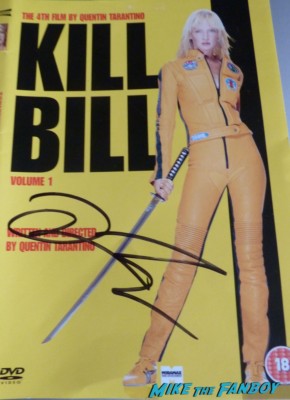