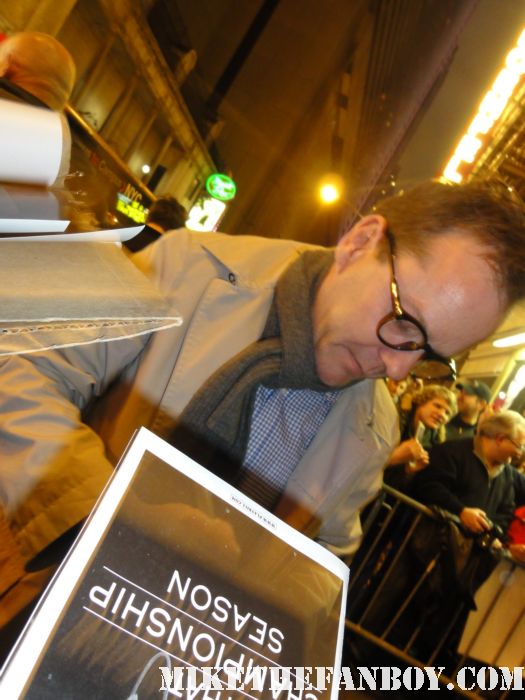 Erica is out and about in New York City with her wonderful sister. As is her usual custom Erica maps out her days trying to squeeze in as much theatre, celebrity sightings and fun stuff as she can. So much it makes my head spin! And I’m pretty hard core if you hadn’t known! Lol…

Anyway, she had some wonderful and amazing experiences this trip and she kindly sent over a review of her week. I’m tired just reading it! Lol…

It’s a running joke in the family that we always have a “Celebrity of the Day” when we’re in New York. It’s a sighting of someone totally expected and the star wattage varies greatly, but it’s always interesting! Here’s a re-cap of some of those sightings along with some other encounters during the week:

At the play Arcadia, we are seated a few rows in front of Jason Reitman (director of Juno and Up In The Air) and the legendary Neil Simon. Let’s just say Jason has a very booming laugh and he definitely enjoyed the first act!

We ran into Chris Rock leaving his play Motherfucker with a Hat. He’s signing and taking pictures with everyone and I sneak in an index card just before he leaves.

We also see Kathleen Turner leaving her show. She signs for the 5 people who were there, laughing and chatting the whole time. 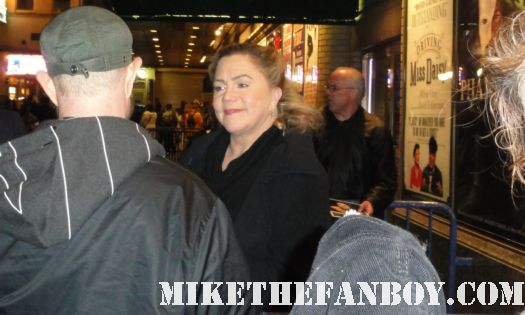 Walking around the city, we pass by Vanessa Williams on the street. Strangely enough, we see her several hours later as she is also seeing Book of Mormon with us. I’m being stalked by Vanessa Williams! If she’s waiting for me at the hotel, I may need a restraining order…

We also go to the stage door for That Championship Season. We’re getting Playbills signed and, thank the stars, the doorman has silver Sharpies!

Jim Gaffigan (It’s Kind of a Funny Story) leaves first and nicely signs for everyone. 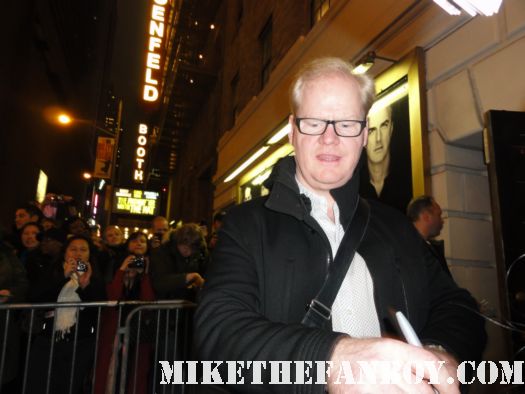 He is followed by former NY Yankees coach Joe Torre who barely looks up as the crowd gets exited and cheers him. 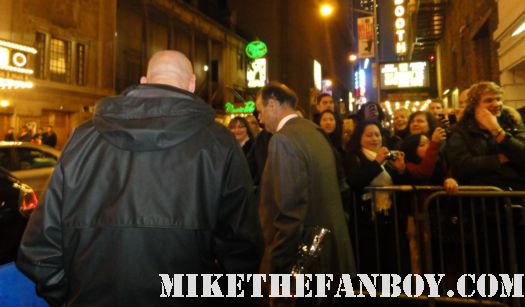 Kiefer Sutherland is next and is surprisingly smaller than you think! Totally thought he was a bigger guy — chalk it up to great acting or smaller co-stars. So nice though. He signs everything and does pictures. I finally get my 24 poster signed so I’m happy! 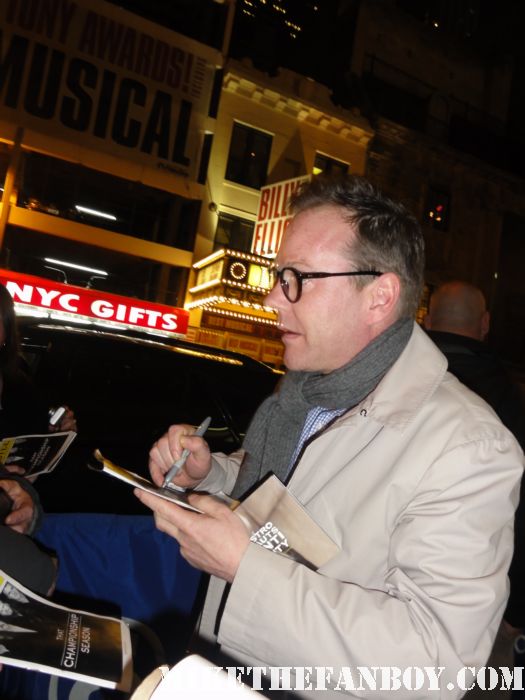 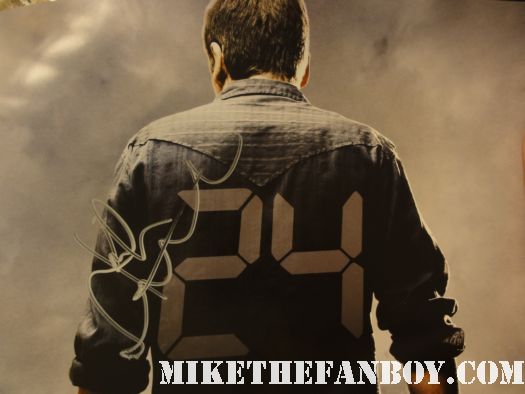 Chris Noth (Sex and the City and The Good Wife) comes out and is positively effusive…for him. 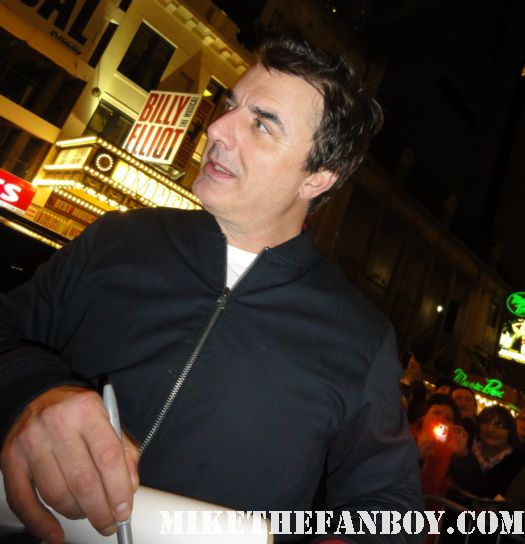 He does not do pictures and barely raises his eyes until a few Latina girls start chanting and he looks up, smiles and blows kisses. 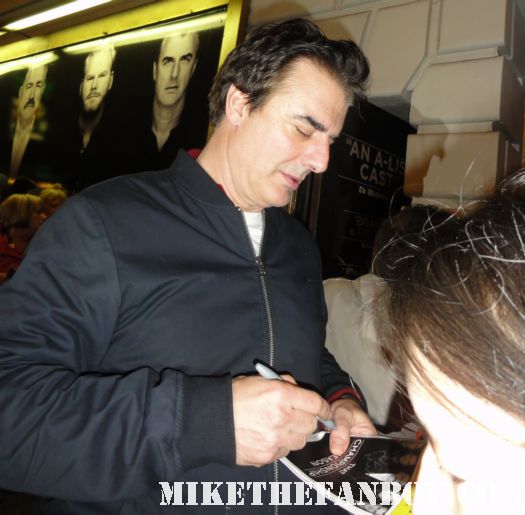 Huh? This is not the Chris Noth you normally see!!

Brian Cox is last to come out and he takes his time. (Jason Patric does not always come out to sign.) Very much the gentleman which is the opposite of many of his roles (X-Men 2, Red, etc…) 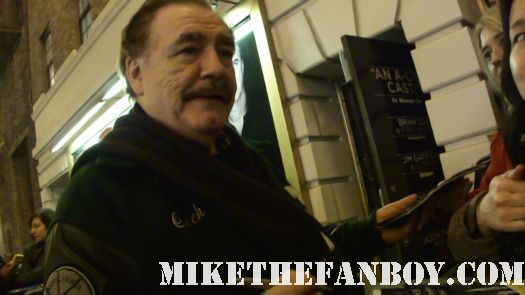 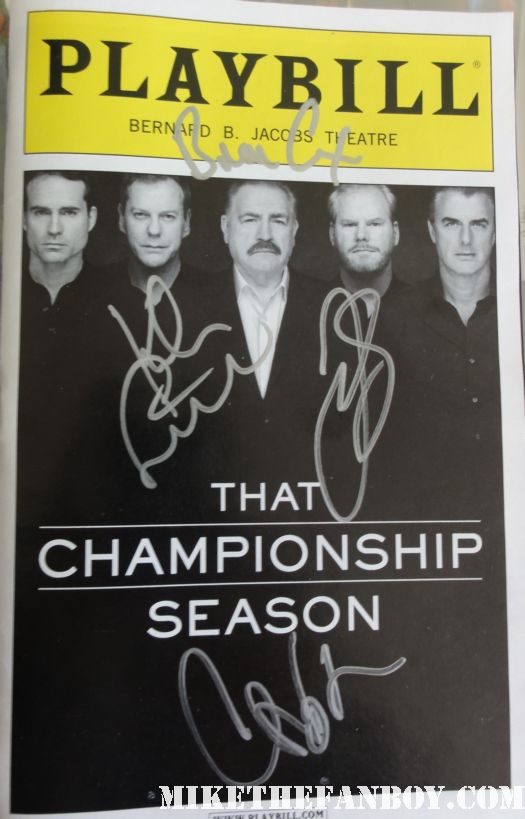 We also hit the stage door of Bengal Tiger at the Baghdad Zoo which stars Robin Williams. Surprisingly there are only 10 people there.

Once Robin Williams comes out, all wooly and fuzzy, more people show up to grab pictures. He tells the crowd he’ll work from one side to the other and he starts on our side. He takes pictures and signs and is in a soft-spoken and friendly mood. He signs my poster and says “Thank you for bringing Dead Poet’s.” Wow! He’s so nice! 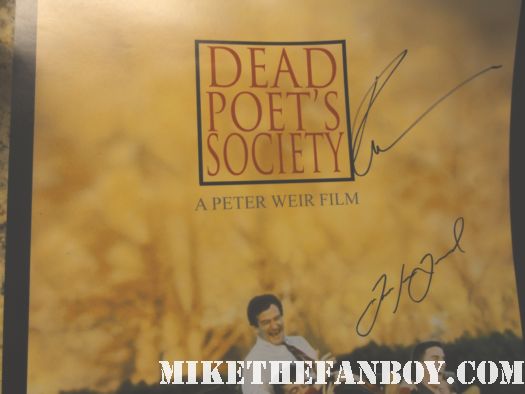 Walking in Soho, we pass by a would-be Keyser Soze! It’s Gabriel Byrne looking dapper as always. (Before anyone corrects me on who Keyser Soze is, look up a great story about how much of the script Gabriel was given while they were filming The Usual Suspects and his reaction after he first saw the film!)

Later that night we grab a late dinner with friends and see Michael Stipe of R.E.M. hanging at the bar. When we leave, we see a group of folks taking a picture and it includes the director Michael Mayer and Michelle Williams (Dawson’s Creek, Brokeback Mountain and Blue Valentine).
We also take a few moments to check out the filming location for Arbitage (no activity) and we also check out Grand Central for a possible Glee or Avengers shoot. Strange combo, but there is confusion over the actual film behind the project name on the parking permits. 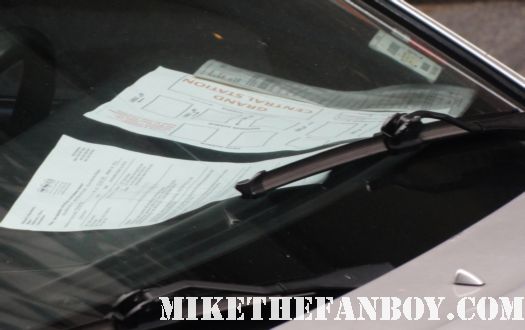 We find the signs and see a couple of cranes and a few cars. I grab a shot of the dashboard of the car and my best guess is that it’s Glee. However there is no activity since a downpour is expected. Ah well! This is the location where Will Smith’s dog, Sam, was bitten by zombie dogs in I Am Legend so it’s not a total waste of the morning. 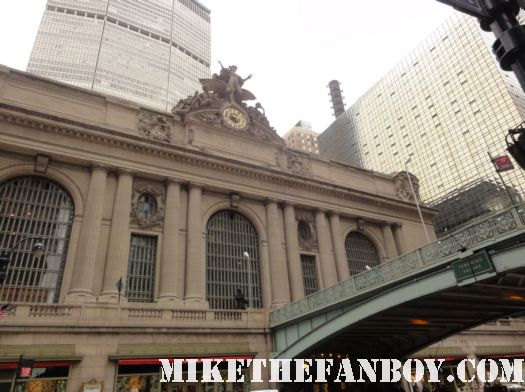 Lastly, we wait for Robert Sean Leonard (Dead Poet’s Society, House) at Born Yesterday which is in previews. He is the nicest guys ever and stops and signs with a smile. He hasn’t aged since the last time I saw him which was about 10 years ago! He also has great timing as we finish with him just as it starts to rain. 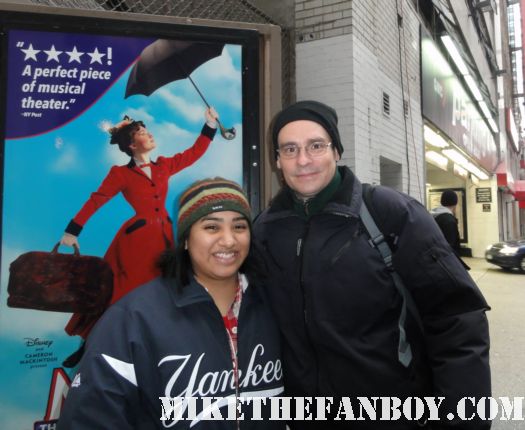