Fanboy Fails, because with every good encounter, you have fails that balance everything out. What can you do right?

This has been a tough week especially for those Hangover fans out there. I know the premiere wasn’t the best and now Jack’s fail. Jack was dissed one on one by Stu himself. LOL…

What’s a man with a Hangover bobble head to do? LOL..

Check out Jack’s Fanboy Fail for this Friday after the jump!

Paging Doctor Douche. Doctor Douche!!!! It’s “Hangover” week at MikeTheFanboy and what better way to cap off the week than have a nice Fanboy Fail. While I was writing my weekly Cult Classic Column I decided to look back on a few of my older articles, particularly the Fanboy Fails and had a good laugh. After re-reading some of the comments and reliving those moments I decided, why not contribute Monday’s misery to the mix.

On Monday I decided to venture out to see Ed Helms (Stu from “The Hangover”) at a recent talk show taping. As luck would have it, “The Hangover 3” premiere would be happening the same night and most people, especially Billy Beer suggested I bail if Ed didn’t sign on the way in. Maybe I should have taken his advice, but you honestly never know in this hobby. There was only one previous opportunity I had to meet Ed Helms and decided to attend a date instead. Later on I learned Ed signed almost everything put in front of him. Still, I held out hope for another opportunity.

Monday, May 20th at 4:00 p.m. – Arrived at barricade and there are only about a dozen people. Everyone there is primarily waiting for Jared Leto since the band 30 Seconds to Mars is taping as well. I appear to be the lone person waiting specifically for Ed as I didn’t bring anything for Jared.

The time goes by so damn slow when you’re going solo as EVERYONE ELSE is at the “Hangover 3” premiere. Eventually at one point we see a Good Year blimp flying above and I decided to take a picture. The band slowly walks back and forth, but no one has seen Jared Leto. One guy had been there for a few hours already and hadn’t seen him. 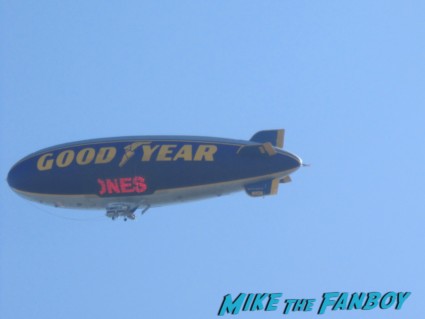 Eventually we see security scrambling and it’s Ed Helms. They open the door and we all call out for him, but he is carrying several pieces of clothing. He looks back towards and does a half-wave. Some of the other collectors joke, “Isn’t he so nice?” A few people leave and I grab a front row spot. I also hear murmurs “The Hangover 3” premiere setup is a complete disaster. 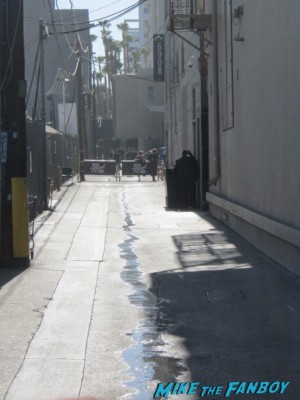 Eventually Jared Leto walks by and no one recognizes him until he walked to the concert area for sound check. Afterwards he walks towards the stage door and everyone calls out for him. Jared appears to be walking towards us, but someone from his large VIP, Green Room and Band entourage pulls him aside (No joke, at one point at least 30 people were waiting by the stage door part of his group). 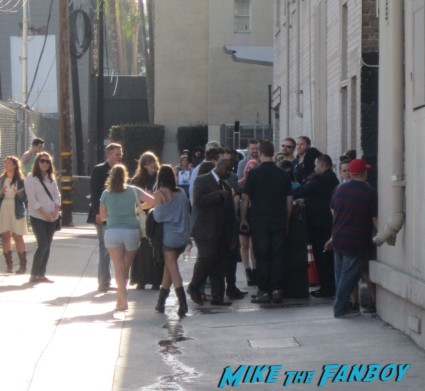 Everyone is disappointed. However, drummer Shannon Leto does make his way down and I pull Ace’s brother up to the barricade so he can get a few autographs. 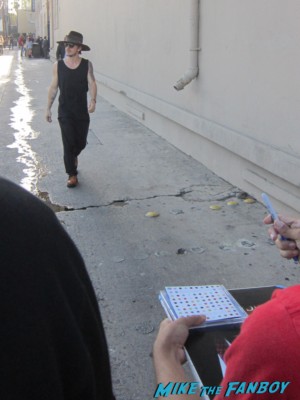 I don’t mind switching if someone wants an autograph for someone I’m not interested in meeting. He winds up getting a few graphs, but they look like S’s and checkmarks, but whatever. 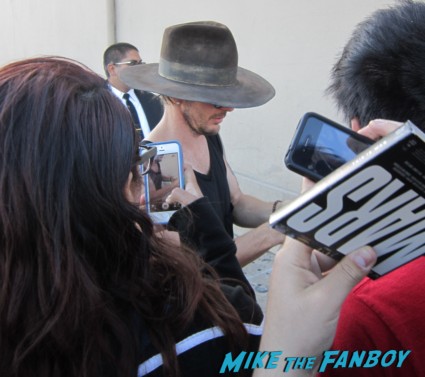 Ed leaves super late considering he has a premiere, but he is casually leaving the show. We all call out for him and in true, douche form he just waves and smiles. I decided to run to his car and wait patiently, “just in case.” I’m literally THE ONLY ONE. When his car arrives to the sidewalk I ask politely, “Ed, could you please sign? I’m the only one here.” Ed appears to be glancing at his phone and then looks up. He then gives me an enthusiastic Thumbs Up and a shit-eating douchey grin. Really? I have a bobble head and a DVD by myself, but it appears I must be a dealer (Celebrity logic). 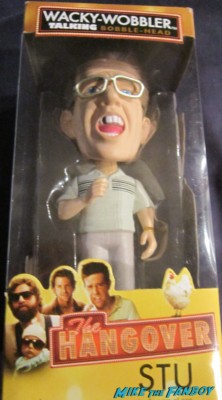 Wow, dissed one on one. I wish he didn’t even acknowledge me. So you won’t sign for 10 people or one on one? I left immediately and one of the dealers even asked me, “Did he do it?” Nope, not even one on one with a calm collector.

This just goes to prove no matter how “friendly” an actor appears on screen/film, doesn’t mean they’re down to earth. I’m really disappointed he didn’t sign. Yes, I understand he had a premiere that night, but if you saw how cool and calm he left, you would have thought he had all the time in the world. As most of my personal experiences have proven, the “nicest” people on TV typically turn out to be some of the nastiest and unfriendly celebrities to their fans. It’s the jerks and a-holes, who are generally the coolest. Oh well, until the next time Happy Autograph hunting!