President Trump hosted an immigration event Friday with “Angel Families” whose relatives have been killed by undocumented immigrants. While Trump was standing with the “permanently separated” families, as he called them, reporters noticed something strange about the pictures of the victims in parents’ hands:

Everything Trump touches turns tacky. Each parent of a kid slain by undocumented immigrant is holding poster of the kids’ face… with a big ol’ Donald Trump autograph. pic.twitter.com/HTKgboORa9

Paul McCartney made a stunning appearance on Carpool Karaoke, reducing host James Corden to tears.The 76-year-old former Beatle toured around his hometown of Liverpool, gifting viewers an incredible glimpse into his early life.A visit to the famous Penny Lane was followed by a call at the singer’s childhood home before the visit culminated in an emotional singalong at a city centre pub.

When you don't want to be the one to tell your friend they look ridiculous. #McCartneyCarpool! pic.twitter.com/l0fQJ8n9JI

Rare stories have surfaced on Facebook about late Soundgarden frontman Chris Cornell and late Alice In Chains singer Layne Staley visiting the same Seattle area Toys R Us in 2001. A former Toys R Us employee shared photos of autographs she covertly got from the legendary singers. This is the only known photo of a Layne Staley autograph to surface from his final few years alive.

As a Star Wars autograph collector I am always looking for ways to grow my collection and find rare autographs that would be tricky to get in person. For the last two years I have been lucky enough to be a member of a Facebook Group called Star Wars Autograph Universe which has helped my collection grow in ways I could only have dreamed.

IT LOOKS LIKE NEW SAMUEL L. JACKSON STAR WARS AUTOGRAPHS ARE ON THE WAY

From the looks of it, 2018 Topps Star Wars Masterwork will have some of the cards. The cards next them with the colored bottoms appear to be for something further down the road. Maybe a new Star Wars Stellar Signatures is in the works?

‘Autograph people are a little goofy’: Dreyfuss signs on to Supanova

Dreyfuss, in Australia with his wife, Svetlana, for a string of appearances at the Supanova comic and gaming conventions, has had a “car crash” of a week.

It started on Sunday evening when the Hollywood star and Academy Award-winner said he was ambushed on live TV. 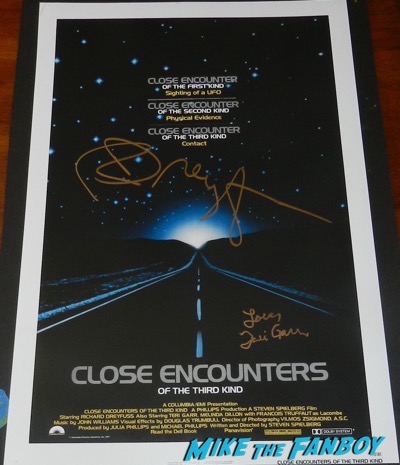