I’m so excited about this! One of awesome friends from back in D-Town went to her first convention! I love it!

Plus, she was able to attend some awesome screenings! Let’s give Amy a big welcome into the world of Fandom! One of us! One of us! LOL…

Check out her awesome recap after the jump!

I attended my very first con in July at the Galt House and Kentucky International Convention Center in Louisville, KY. There were so many things to see and do. I had plans to get a professional photo op and two autographs during the weekend. I ended up with so much more!

On Friday, I saw two films: ‘Lucid’ and ‘The Cemetery’. I enjoyed ‘Lucid’ and stopped by the production company’s vendor booth after the film. They were very kind and signed a poster of the film for me. As far as the other film goes, well, I’m glad I didn’t actually pay for it; it was terrible.

Due to the magnitude of the con, vendors and celebrities were spread out into two locations. I took the Galt House rooms first. There, I was able to get an autograph and photo with none other than Michael Rooker from TWD! I was star struck for sure! I had him sign my copy of ‘Tombstone’ which is one of my favorite films.
    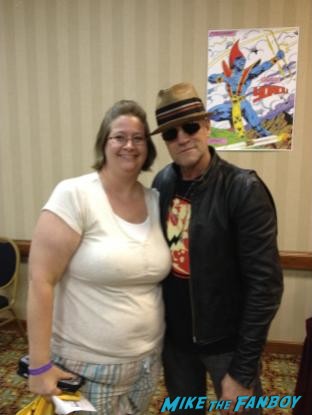 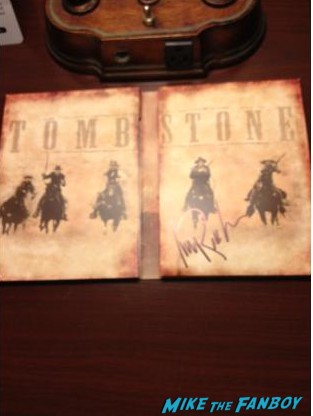 Next, I saw Lew Temple and was able to get a photo and his autograph as well. Lew was very kind. He signed my copy of ‘Unstoppable’.
    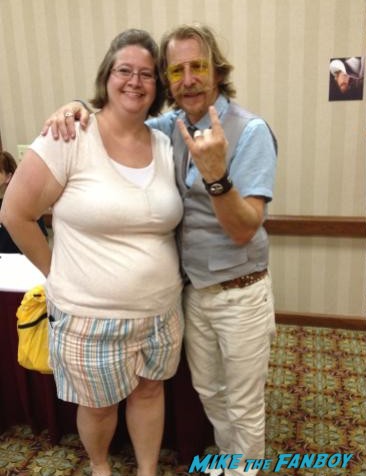 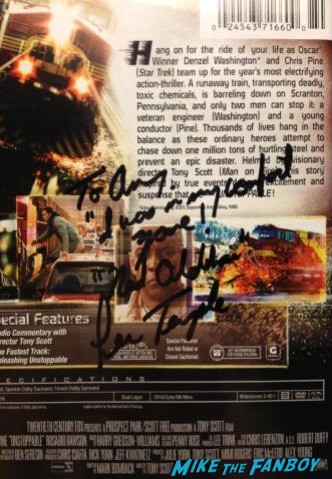 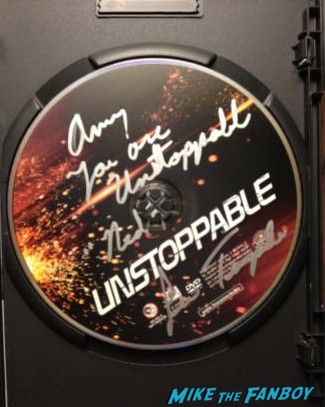 By now I had somewhat calmed down and got in line to see Iron E. Singleton. He took some time to chat about how much he enjoyed coming to Louisville. I happened to have a copy of a Walking Dead magazine that I picked up to read, and ended up getting it signed!
   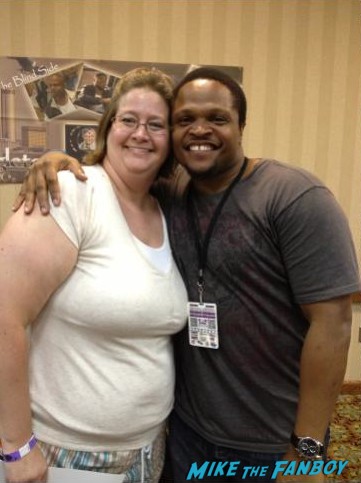 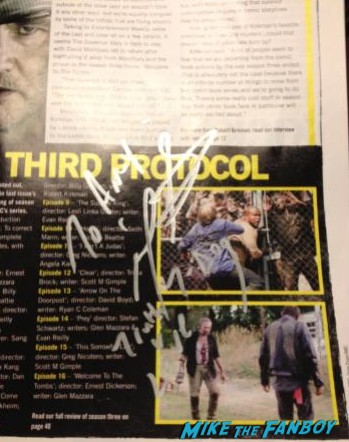 Then I stopped to see Vincent Ward! He did not know that he was even in the magazine I had. When I showed him a picture with his character in it, he took a picture of it! Then he posed for a photo with me.
  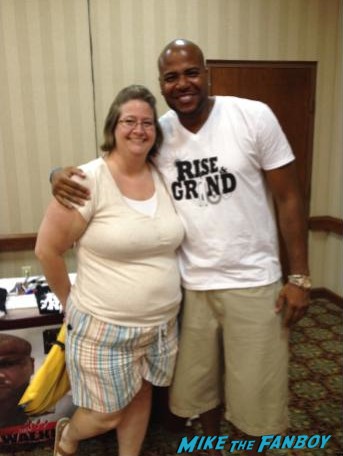 In the next room were more vendors and celebrities. ‘Tattoo Bob’ had a booth of these wonderful hand drawn sketches of various celebrities. He had a few from the Friday the 13th series, specifically of Kane Hodder, who played Jason Vorhees in parts 7-10. I picked up one of the character and took it promptly to Kane Hodder for him to sign. He also posed for a photo! I had a lot of fun talking with him! Great guy!
   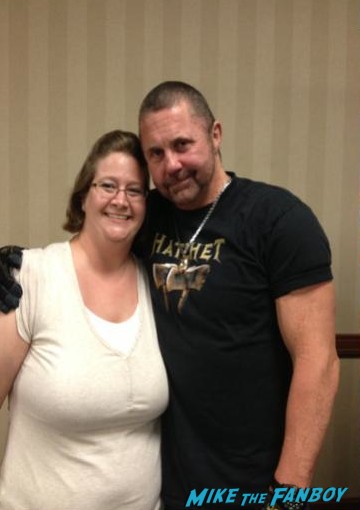 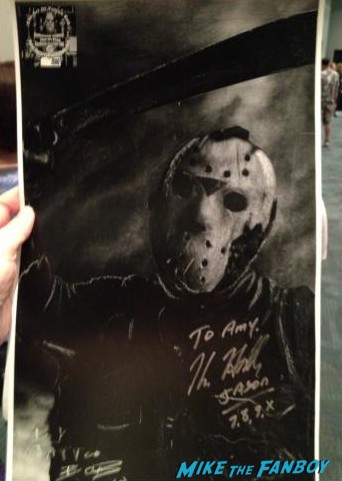 Zach Galligan, from the ‘Gremlins’ was also there and posed for a picture. He teaches acting classes now at NYU! He was also in the latest ‘Hatchet’ film with Kane Hodder.
  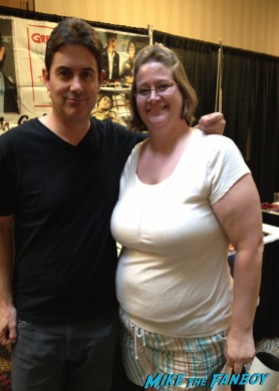 I couldn’t believe I was able to get photos of that many cast members from TWD so soon! And such short lines! From there I moved over to the convention center, where there were two floors of vendors and celebrities. I was able to meet the great Scott Wilson who signed my magazine and posed for a photo!
   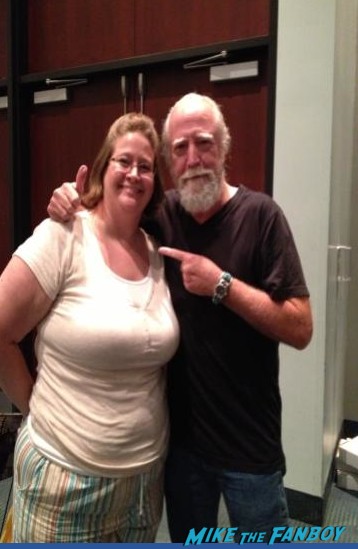 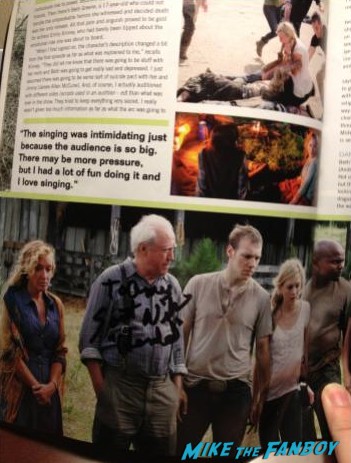 Right next to him was Sean Patrick Flannery! I was able to speak with him and get a photo. I never realized it was him who played ‘Powder’ in the film. I asked him about the make-up. He told me that if it was a scene where just his hands and face were seen, it took 2.5 hours. That’s still a lot if you ask me!   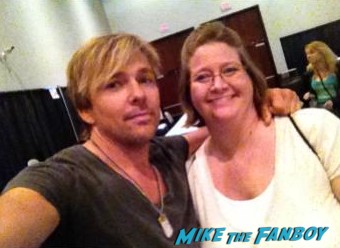 That was all just on the first day! Saturday was packed with even more. I waited in line for my professional photo op with the Dixon Brothers. From there it was off to another film called ‘The Awakening’. One of the actors from the film was there to talk about the filming as well as the director and producer of the movie. It was an okay film.

Then I got ready for the Masquerade Ball and a party sponsored by Horror Hound. The party was first. While sitting at a table listening to the music, in walks Scott Wilson! I walked over to him to get a photo in my costume – he took my mask and held it up in the photo! How funny! 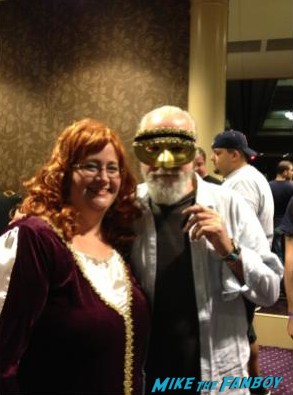 Not too long after that, Vincent Ward came in! I showed Ward my photo with Wilson in my mask — he laughed a lot and also took a picture with my mask.
   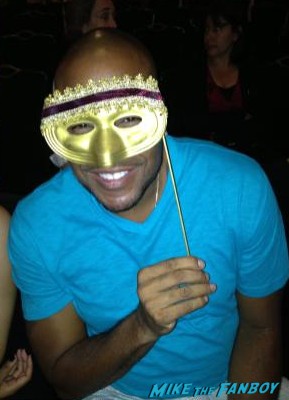   Then Michael Rooker came in running around taking pictures of random stuff with his phone! He’s a hoot! 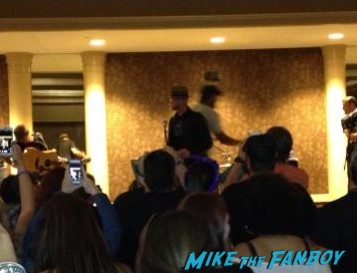 Never made it to the Masquerade Ball. This was too much fun!

I also attended a Firefly Q&A, where Nathan Fillion called in during the session. Adam Baldwin put him on speaker phone so we could hear. Very cool! I even got the chance to speak with Ed Gale — what a wonderful man! He was so pleasant. I told him that this was my first con, and he told me that this was his last! (However, I don’t think it will be.) He posed for a photo with me, too!
  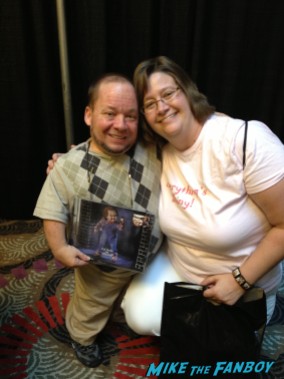 During breakfast on Sunday, Scott Wilson came in to eat. He sat all the way in the back. People noticed that he’d come in, but left him alone to eat in peace. We happened to leave at the same time. I caught up with him and thanked him for the photo with my costume mask the night before. He laughed and took another photo with me!

Stopped back by Kane Hodder’s booth and spoke with him again. He talked about being a stunt coordinator and made comments about how the Hatchet series was fun for him to do. I attended another Q&A session that afternoon with Adrian Paul. He talked about his charity work and of course, the Highlander series. Someone asked him about the different swords used in the series. I asked him if he kept one of them. He grinned and said yes.

Everyone I met was very friendly and kind. Had laughs with several of them. Scott Wilson, Kane Hodder, and Ed Gale were my favorites. My favorite purchased item is my photo with the Dixon Brothers.  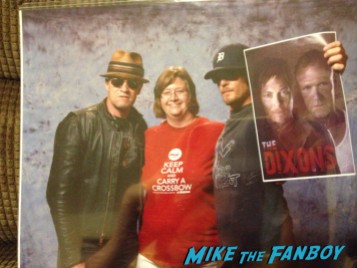