Suddenly Susan, had an awesome night, not only was she able to attend the premiere for Felony, but she won meet and greet tickets… Who was she to meet? Who was her gaze to fall on? None other than Joel Edgerton! Yep, the Warrior and Star Wars star!

Susan has been a huge fan of his, so this was a real treat. Sadly, there was a crazy moment with Aaron Paul that put a sour note to the evening. Doh!

Joel Edgerton – one of my absolute favorite actors – was scheduled to appear at the LA premiere for his Australian film “Felony”. I was all set for an autograph campout. I had never been to this location before and heard super mixed reviews from the Fanboy Family. So, I perused Twitter hoping I’d find some tips when I saw there was a contest to win tickets and get a red carpet photo op with Joel. I immediately retweeted and thus was my entry to win. Wouldn’t you know, two days later I received a message telling me I had won!!

There was immense pressure to throw together an outfit with only a day’s notice, but once they said black pants were fine, I was set. I took my friend Ashley and we headed out, looking amazing. 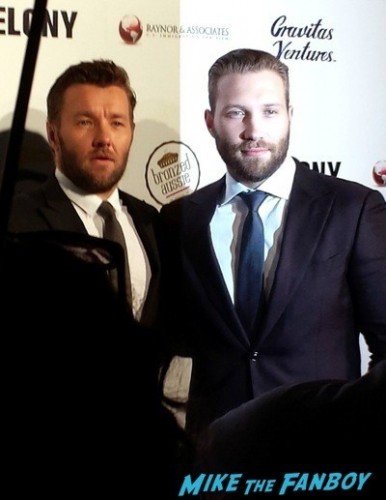 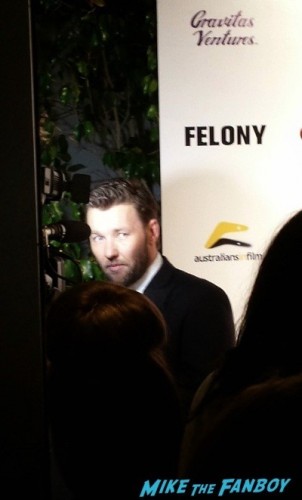 After Joel had done his red carpet photos and interviews, they took the contest winners (myself and 2 from Facebook) and our plus ones and sent us up two at a time. Ashley and I were last to go. Joel was looking super handsome in a tailored suit. He asked my name, shook my hand and did the same for Ashley. We got two great photos on the red carpet with Joel’s arms wrapped around us. Nice. He shook our hands again and that was it. A quick 15 second meeting, but still amazing none the less. 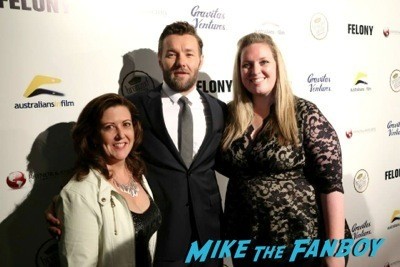 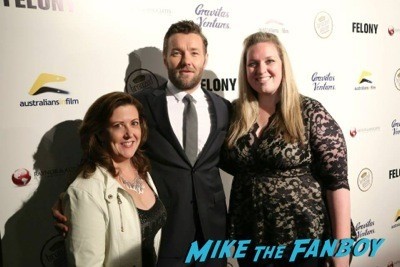 I had brought with me a supposed “screen worn” shirt of Joel’s from Warrior (under my own meticulous scrutiny, I surmised it was not screen worn) in hopes he would sign it. The meet & greet was so quick I never got the chance to ask him. No matter. It was still a rare treat to be there. We went inside and secured some seats and I headed out to the restroom before showtime.

I walked into the lobby and who is standing there all by his lonesome? Joel! Without hesitation I walked up said hello and told him I had his shirt form Warrior. Before I even asked him to sign it, he said “do you have it with you now”. When I said yes, he told me “go get it; I need to use the restroom. I’ll meet you here and I’ll sign it for you”. Sweet! I ripped through my purse like the Tasmanian Devil and got it and a gold paint pen. My friend Ashley followed and took photos while I blabbered on and on about what a huge fan I am of his work. 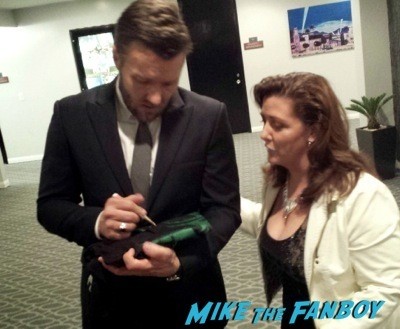 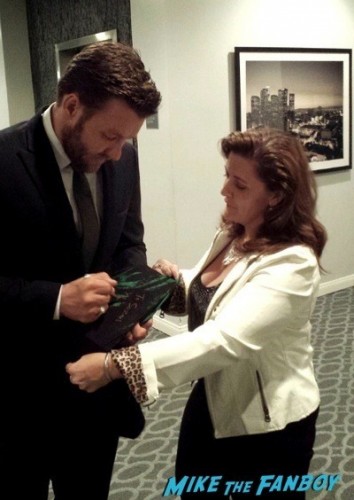 He opened the shirt and said like a kid on Christmas morning, “ooooooh, you got one of these!” He sounded almost envious. 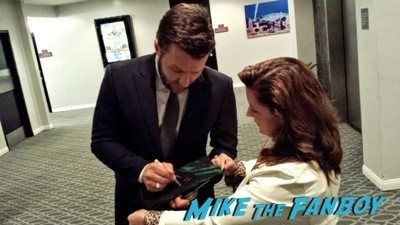 He signed it “to Suzan (yes he spelled it wrong but he’s too awesome to fault), Warrior!!! Brendan C. (his character name) and Joel E.” Please note there are TWO ‘X’ marks – that means kisses folks! He also thanked me for all my kind words and said he truly appreciated it. Swoon. 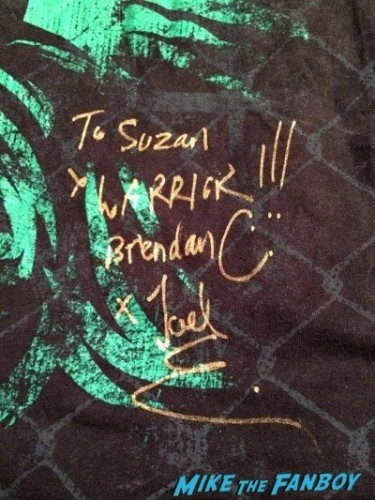 After watching this incredible film, which stars Joel, Jai Courtney, and Tom Wilkinson, we headed to the after party in the lobby. Loud and crowded was the theme. I spoke to, but did not get photos with Jesse Spencer, Jai Courtney, Daniel Campos, and Nash Edgerton.

Poor Ashley asked one person whom she’s a big fan of for a photo and although he did it, what a scene. He was super melodramatic, huffed and puffed like it was the worst thing anyone had ever asked him, and was basically a dick. I stepped up to take the photo and his whole body twisted and he put his hand out like, no, I’m not taking photos with everyone now. I told him not to worry I didn’t want a photo, I was just taking it. Then he shook he head, like, oh, ok then. She handed me her phone and as I was asking her how to snap the pic, he leaned to his friend and said “camera’s not even ready”. He looks extremely pissed and she looks terrified in the photo. I’m sad to report it was none other than Aaron Paul. I’ve read nothing but good things so he must have been having a bad night. He was pretty rude and without cause. It would have been better for him to just politely decline.

We also spotted Jason Clarke and she was too afraid now to talk to anyone, so I asked him if he wouldn’t mind if we took a photo. He said of course, but first, wanted to know how we were and shook our hands. What a super sweet guy! He even took his glasses off and bent his 6 foot 4 frame down to my level. He looks so mad in the photo – I promise he was nothing but kind. 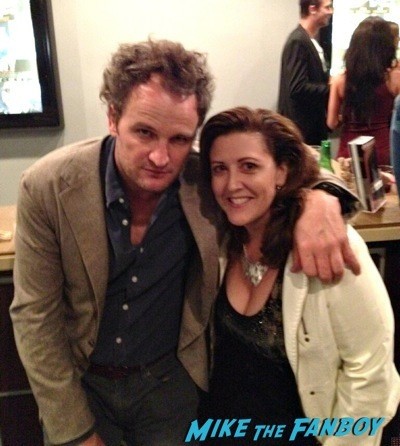 We mingled for a bit afterwards and headed home feeling like big winners. I could not have been happier, or luckier! 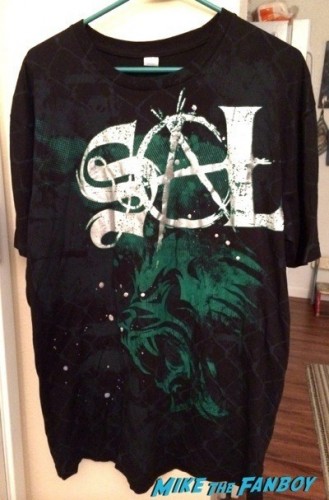