Home / Reviews / Harley Quinn: Birds Of Prey ScreenX Review: Is It Worth Checking Out The New Multi-Projection Theater?

It’s always fun to introduce people to new formats, when it comes to the theater going experience. I for one, love going to the Movies. To be completely honest, there’s nothing like it. At home, I tend to be… shockingly… on the computer, or the phone and not giving the movie or TV series my full attention.

The theater however is different.

I was so lucky to be able to head down to the CGV Cinemas to check out Birds of Prey in ScreenX. Or wait, is it Harley Quinn: Birds of Prey now? Either way, you have to check it out.

So, for those of you who haven’t seen my previous ScreenX reviews, let me tell you what the website says about ScreenX.

So, I was very lucky, no pun intended to be joined on my ScreenX adventure with my good friends Andy, Erin and their daughter Mara (who is adorable, BTW!)

Erin, joined me on my last adventure, but this was Andy and Mara’s first time seeing ScreenX and I think just judging by Mara’s gasp and saying, “Mom, look at that!” I think she liked it. 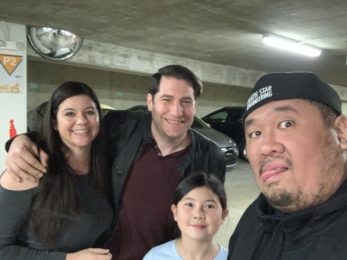 One of the coolest things about seeing Harley Quinn: Birds of Prey was that the utilization of the side screens were done deliberately and were done to not only extend the action on screen but to enhance the film. Birds of Prey used a variety of different techniques, done of them was spray painted words and different things done to enhance the film.

The side panels used the spray paint to enhance the effect and the film itself. It was really cool to see to be honest and gave us all the feeling of being a part of Harley Quinn’s warped mind. 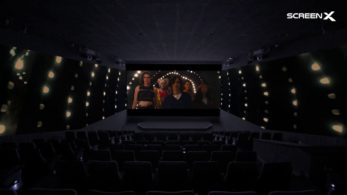 This film used the side projections more than I’ve seen before and I loved that! There were so many action scenes in Birds of Prey that seeing it in ScreenX was in a word awesome. It was super effective and I loved it.

I really enjoyed the film as a whole, but I know that seeing it in this format really did help my enjoyment of the movie as a whole. Anytime you can see something where the way you see it, makes that film better… I can’t think of a better endorsement.