Home / Fanboying! • Q and A / Hilary Swank Goodness! The Oscar Winner Was Hyper Nice! Even Having Security Get Waiting Fans And Bringing Them Up To Meet Her!

There are some nights, you just never know what to expect.

Hilary Swank, two time Oscar winner, former 90210 star, etc… was doing a rare q and a for her new film, You’re Not You.

Now, we couldn’t get to the film in time but decided to wait and see if Hilary would be nice to stop on the way in.

When we arrived there were only a couple other fans waiting, we talked looked around to see what was going on, and then decided to wait.

I was on the phone when security came up and said something to the other guys waiting. I wasn’t even sure what was happening to be honest.

So, we headed downstairs for a hot second, and who walks right past us, Hilary Swank! One of the guys asked her if she would mind signing and she said, “I can’t right now, on the way out.”

Scotty and I decided to grab some food with some friends who were waiting for the next q and a when a security guard came up to me. He was like, “Are you here for an autograph?” In the back of my head I was like… Great. So, I said, “Yeah, that’s why for the most part.”

He said, “Oh, she said to come up and she’ll come out and sign for you guys.” I was like what?

So, we went back upstairs and I was talking to the security guard and he said, “you know, we just can’t have people rushing guests.” I was like, “Man, it’s all about being respectful.”

We get up to the theater and out come Hilary Swank. She was over the top nice. She said, “Hi guys!” I went first and asked her to sign my poster to Mike, and then asked for a photo, she was like, “absolutely!” 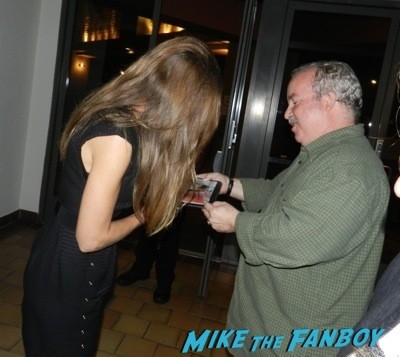 Then Scotty had her sign his Freedom Writers mini poster and she was so stoked. She went on and on about that movie. 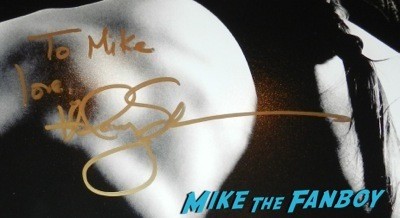 Then everyone got one thing signed and a photo. She was so sweet, I’ve never heard of anyone doing that before. Literally, getting security to get everyone. Usually, once they get away from people that’s it. 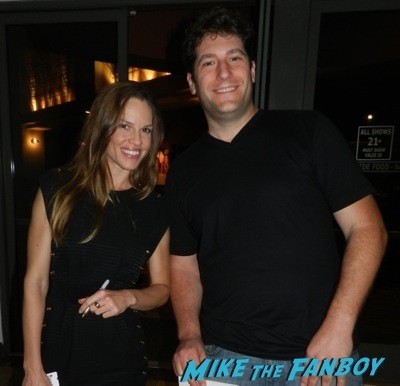 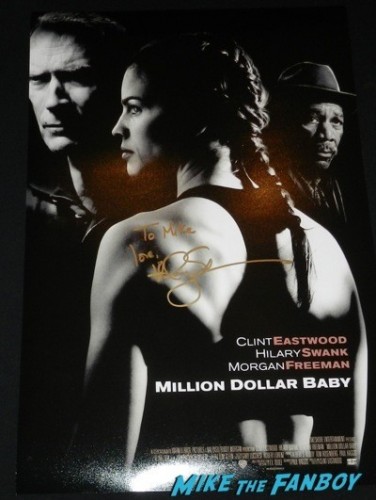