Jack headed out to Paleyfest 2012 to check out the panel for New Girl. Now, this year I think I’m only checking out one panel myself. I’m debating about two… But, I dunno…

This was one panel I was debating about checking out but just didn’t have the time. Oh those Fanboy conflicts! LOL… Jack is a HUGE New Girl fan, and got Tickets to the event. On a side note, I hope that Paleyfest brings more first season and different shows to the fest.

So, without further delay! Jack, take it away! Why am I always Rhyming? LOL…

Monday was an awesome day for me. One of the main reasons why was because I got to meet the entire cast of New Girl or as they have been dubbed the Fab Five at Paleyfest. For the second time in three days I made my trek down to Beverly Hills and had a wonderful time at the Saban Theatre, but my fun day started a few hours before.

Earlier in the day I checked out one of my favorite restaurants The Waffle and ordered my favorite burger, The Works (bacon, caramelized onions, cheese, lettuce, mushrooms, onion, a sunny side up egg, thousand island dressing, and a tomato on top of a delicious burger). You absolutely have to check it out and The Waffle is located conveniently near Amoeba Music, the Arclight Cinemas and Hollywood Palladium near Sunset/Vine for those interested. I bring this up for two reasons: 1) After ordering one of their specialty alcoholic drinks I got hooked up with two complimentary ones and 2) I bumped into one of my favorite models/actresses Rie Rasmussen at said favorite restaurant and had a great conversation about her film Human Zoo. Before she left The Waffle, Rie said goodbye to me and that definitely gave me an even bigger smile.

Pretty sweet? My evening got a whole lot better after that. I headed over to Sprinkles to buy some red velvet cupcakes before arriving at Paleyfest. Surprisingly, I’m able to get a spot right in front of the store despite it being packed. There are several people (literally) right in front of me when a girl behind the counter takes my order. The individual in front of me takes the last red velvet cupcake on display, which makes me sad until the girl mentions a fresh batch just came out. Next thing I know I got to skip ahead of four people and pay for my order since my order “was ready.” Talk about having a good day. So up to this point I was on a good high before I even arrived at Paleyfest. 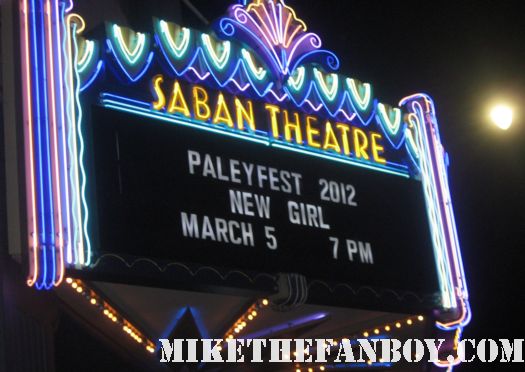 5:30- I parked near the Saban Theatre at my usual parking garage and paid $12 instead of $10. Really? It was more expensive during a weekday than a Saturday? Okay…

5:35- I arrive in line and notice the member’s line is longer than the general admission line. I couldn’t believe my eyes. Then it happened. Dandruff man is back…with a vengeance. Apparently he got the memo about the Head and Shoulders as he looked normal, well as normal as he could, while he tried hocking his cheap New Girl photos to unsuspecting fans.

5:40- My three drinks and several waters are really hitting me now. I need the bathroom ASAP

6:00- We are let in and I immediately head inside to pick my seat. Rats, the front row is all taken up except for seats near two very large women. I man up and give myself a buffer seat between the three of us. The lady next to me agrees to watch my stuff while I head to the bathroom.

6:03- I feel great, but now I have to wait almost an hour with the most non-friendly and quiet people ever. I hate attending and sitting next to introverted individuals. 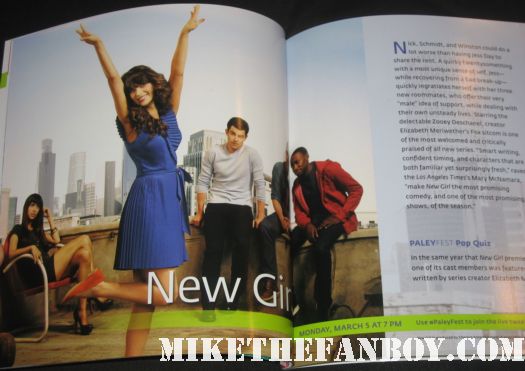 7:00- The creator of New Girl, Elizabeth “Liz” Meriwether comes out and jokes about how awkward it is addressing people.

7:30- The latest episode of New Girl, which aired on 3/6/12, ends and the cast is introduced shortly thereafter. I’m most excited to meet Hannah Simone “Cece” and really hope I can get a picture with her. 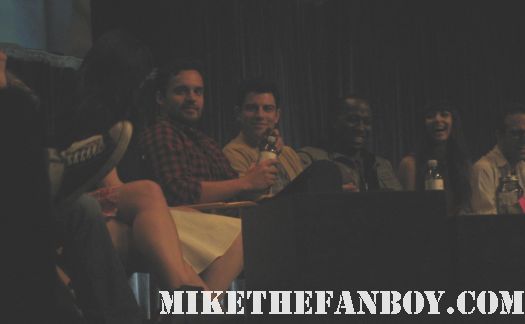 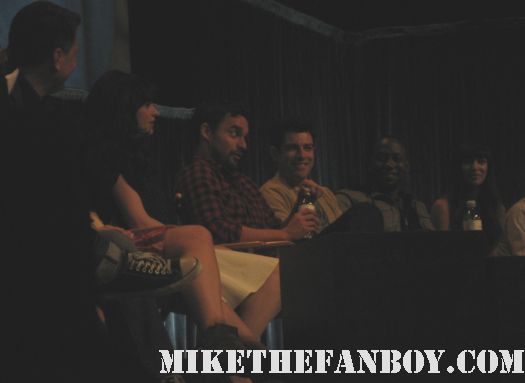 The next hour or so is kind of a blur and goes by quickly. Once the Q&A ends, everyone heads to the stage as usual, but this time there is more security dispersed both on stage and in front of people in the first row.

Liz Meriwether was closest to me and she signed for maybe a minute or two. I could tell it was uncomfortable for her as she didn’t like the attention or rather she wasn’t used to it in large numbers. Don’t get me wrong, she loves her fans, but she isn’t used to people asking for pictures and autographs (Most writers I have met feel this way. They rather discuss their work than sign autographs or take pictures). She signed in the middle and starts to take off. I’m able to get her attention by waving my No Strings Attached Blu-ray and she comes over. 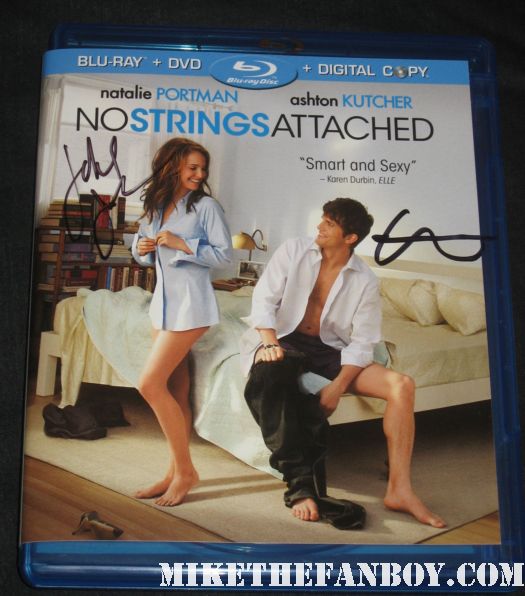 We briefly discussed an alternate scene that didn’t make it in the theatrical cut and she was impressed I saw that version. She also managed to sign my program as well and took off after that. She maybe signed two or three more autographs while talking to me.

Max Greenfield and Jake Johnson started going down the line getting as many people as possible. 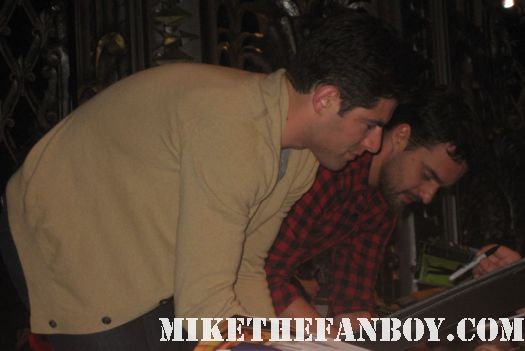 At one point I overheard Jake tell Max to keep moving down because “We are needed backstage.” Apparently they didn’t take pictures (maybe not enough?) before the event and are being rushed backstage by the publicists, security and the Paley staff. 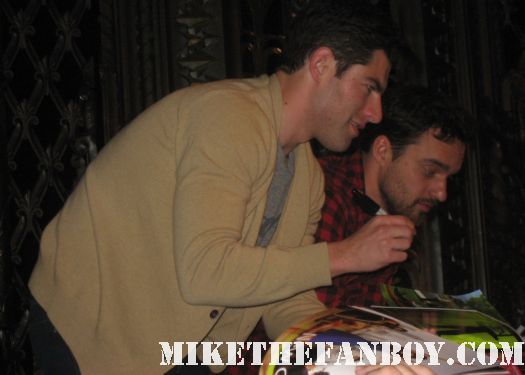 This does not seem too good. Still, they are taking their time with everyone down the line, but are only moving forward. No back and forth signing.

Like Mr. Fanboy himself, I’m a huge Veronica Mars fan and was really excited to meet Max Greenfield, who played Leo D’Amato on the series. 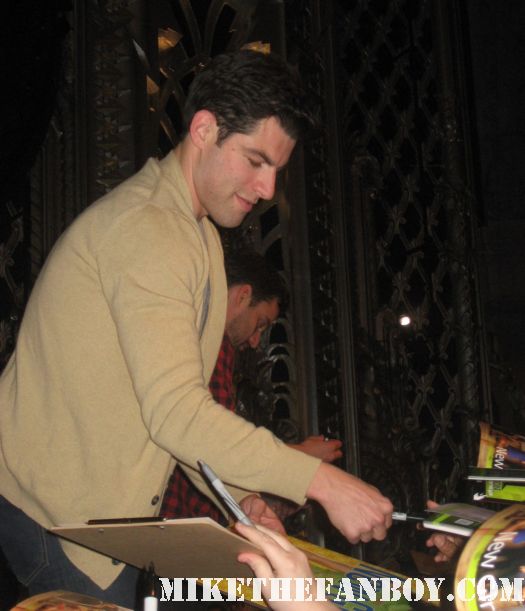 I brought my Veronica Mars season 2 insert and Max was thrilled to discuss Veronica Mars when he saw it. He thumbed through the insert trying to decide where to sign and finally he decided to sign the front cover and my program. 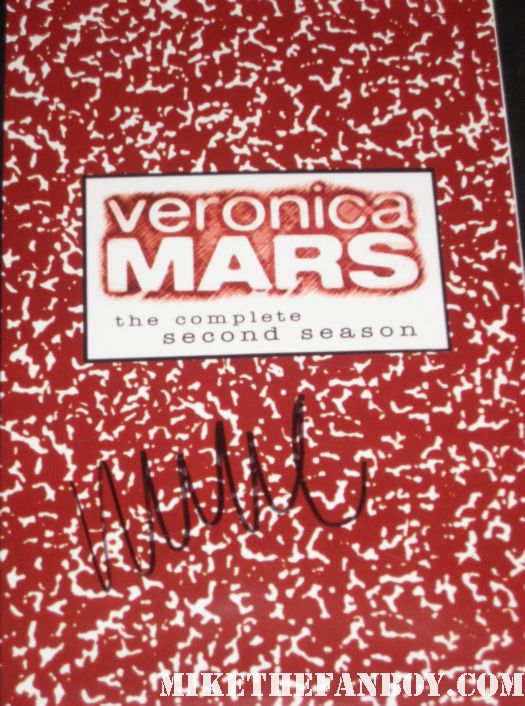 We discussed Kristen Bell/Veronica Mars and he even said people still come up to him all the time asking when (not if) the Veronica Mars film is going to be made. Max was super nice. I just wish he wasn’t being rushed out so I could get a pic with “Schmidt.”

Jake Johnson comes next, like a minute later and is signing up a storm. I manage to get him to sign my No Strings Attached Blu-ray and Hannah Simone is practically right on top of him now. I manage to pull out my program book and snag her autograph, but she is moving too fast. Afterwards I’m able to snag Jake once again, but his autograph is more a “Jake” than his full autograph for my program.

Everyone is freaking out about Zooey Deschanel because it appears like she is taking her time with only one side of the crowd. To be honest I’m just as worried because let’s face it, she is the real reason why any of us watch New Girl (Plus the main reason why I bought a Front Orchestra ticket). Next thing I know Zooey is moving super fast going down the line signing as many items as possible. When I see her getting close I manage to reach out my right hand and snag an autograph on a She & Him CD booklet while my left holds the program book. 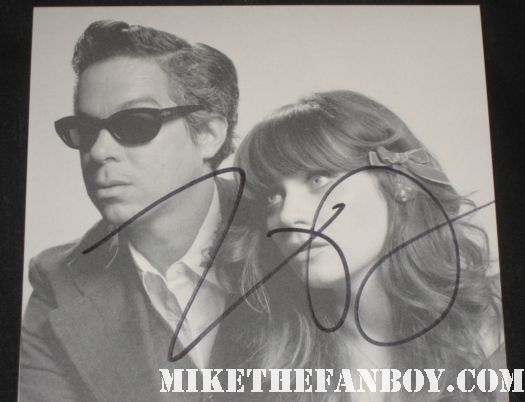 I’m able to get both signed, but when I tried for another She & Him booklet there was no such luck. She is already too far down and pretty much done.

I then take a look around me as people start to moan and groan about how quickly Zooey was moving. Could you blame them? There wasn’t even enough time to say “Hi” let alone, “Blah Blah Blah (insert comment here).” Her autograph was a ZD by this point and if that wasn’t bad enough, she signed on top of Liz Meriwether (top left) and Max Greenfield with my program.

Lamorne Morris was the trooper Monday night, signing autographs for everyone and obliging every single photo request. 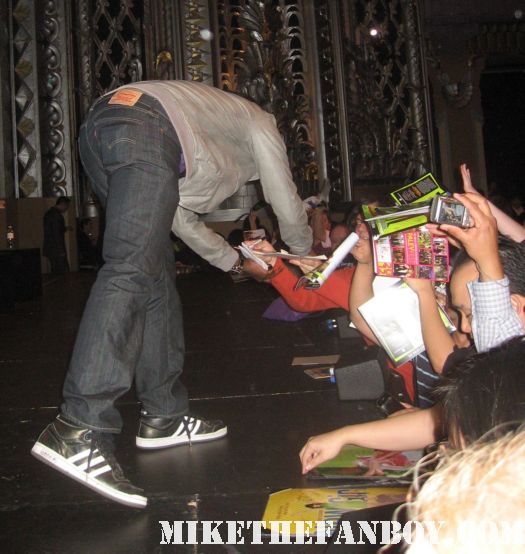 Like the rest of the guys, he was very laid back. At this point, most of the audience had left and as soon as Lamorne Morris signed my program I joined them. 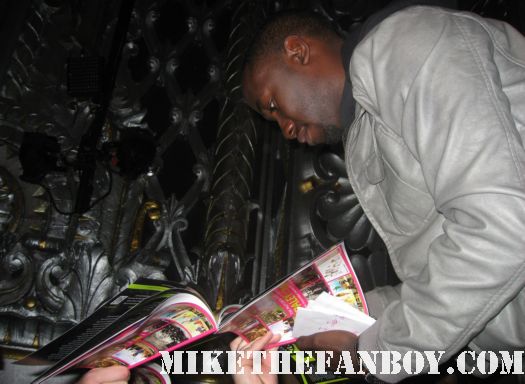 Unlike previous Paleyfest events where most people left pretty content, this time I heard more frustrations and grumblings as I exited the theater like “WTF? Why did they leave so quickly?” and “Gosh, this is the shortest meet and greet I have seen at one of these events.” I concur wholeheartedly. As I walked towards the parking structure I noticed a couple dozen fans waiting near the Paleyfest exit, where all the stars leave in their cars. I took one look at them and wished them the best of luck. It just didn’t seem like one of those nights.

Overall, I had a pretty amazing day. Nine autographs on three items, not too shabby. Plus I got to meet the entire cast of one of my favorite shows at once- awesome! Still, I just wish their autographs were more legible and not “scribbles.” I have one last Paleyfest event that I’m attending and I can hardly wait. Until then, happy autograph hunting! 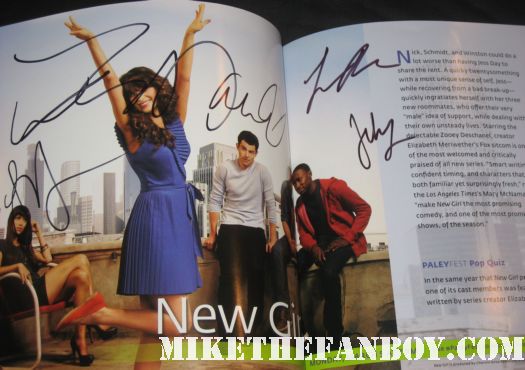