Oh the cold streets of Santa Monica. It’s a whirlwind sometimes here in Los Angeles. Today, none other than John Goodman is doing a Q and A for Inside Llewyn Davis the new Coen Brothers film.

I arrived pretty early and Jack was supposed to join me, but I think he had the sniffles again so he couldn’t leave the house. LOL… I’m only kidding.

After a bit a few others were here for a total of about nine people. I’m hoping that this will go fine. John Goodman is knows for being a tad difficult but I’ve heard that lately he’s been much much nicer.

I brought my friend Scott’s DVD cover and also my Oh Brother Where Art Thou mini poster for John. I only expect to get one, but you never know so I like to always bring a couple things with me.

Thankfully, no one here is super nuts. Who knows how this is going play out. The funny thing is that there are tons of fights breaking out between the theater and the subscribers trying to get into the screening. Seriously, it’s almost comical.

At one point the guy running the theater is telling people to leave the premises and “get off theater property.” These people actually pay to be a part of the theater and they were really treated like shit. Damn, it’s a little odd.

One guy is super odd and keeps pacing back and forth with disheveled hair. Wow… You just never know what you’re going to run into waiting for John Goodman.

After a few minutes we see a car coming but it passes us and stops around the corner. That was actually John! Doh… We all walk and try to keep everyone in a moderate line. 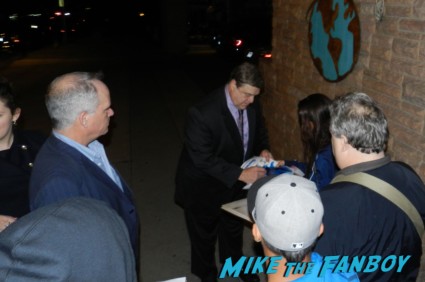 John is actually really nice and walks on over and starts to sign. I think he signs a couple each for the first two people and then he makes sure it’s one each. 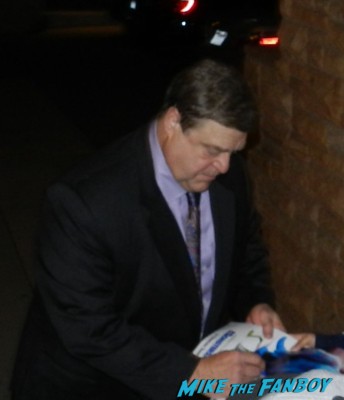 John signed my Oh Brother, Where Art Thou poster and I thanked him for signing. He was nice and said, “You’re welcome man.” 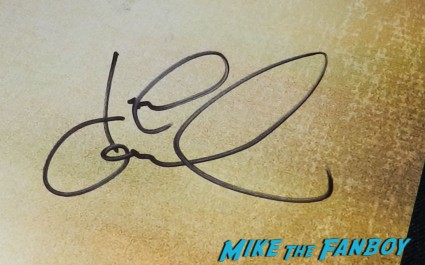 And that, as we say is that!

I’m very stoked to get John on my Oh Brother mini poster and someday I’ll get him on the Roseanne DVD as well. Good times! 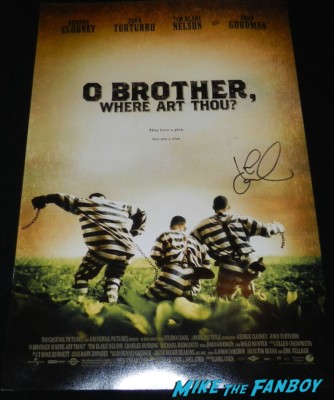