It’s almost… Well… It’s just sad sometimes. LOL… I mean… Everyone gets stuck with a fail here and there, but I know a lot of people were super disappointed with this latest Fanboy Fail. Johnny Depp was out and about promoting The Lone Ranger and did a talk show appearance.

By all accounts it was nuts, police, tour buses, etc… It’s just too bad so many people were left disappointed. Especiall by someone who is so fan friendly.

Check out Jack’s latest Fanboy Fail after the jump!

Into the great wide open….rebels without a clue. Days like today break my heart as an autograph collector. Today I went out for my favorite actor, Johnny Depp. You might recall practically everyone at MTF has met Johnny (except Susan and I) and most collectors regard him in the upper tier as far as elite signers go along with Tom Cruise, Brad Pitt, Angelina, Jolie, George Clooney, etc. I was extremely excited and was joined by Awesome Anushika, Billy Beer, and Scotty The Music Man.

The week prior Johnny Depp appeared at Jerry Bruckheimer’s Walk Of Fame ceremony, which Billy wrote…documented with a photo gallery, but he forgot one important thing: Some idiot decided to bring a TOY gun to the event in hopes of getting Johnny to sign it. Obviously security noticed the item, approached him and demanded to see what he had on his person. Unless you weren’t nearby or paying attention, it went completely under the radar. I bring this up for two reasons: 1) I didn’t expect Johnny to sign because he’s a class act and respectfully didn’t want to upstage his friend Jerry Bruckheimer on his special day and 2) People can be (fill in the blank) morons and don’t use common sense. MAYBE if he didn’t bring a toy, fans and collectors might have had a chance, but instead one person ruined it for the rest of us.

On the day of the event, I received a call from Scotty telling me to get there even earlier because there were already 30 people at an ungodly hour. After packing up my things I made my way down and met the Awesome Anushika for the very first time. None of us could believe there is this many people, but it soon grew worse. Maybe two hours later the alley stretched all the way into a nearby parking garage with close to 100 people and it was barely noon. 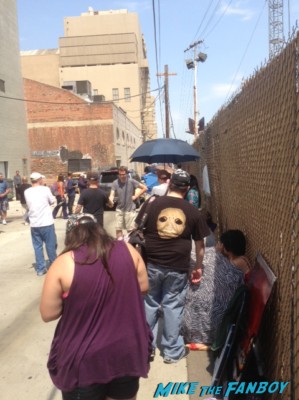 Fortunately for me I was able to discuss sports with some people and it helped pass the time in the 90+ degree weather. No matter how ridiculous it looked I decided to bring an umbrella and boy did it help. The sun kept coming out back and forth, which was extremely frustrating to deal with as everyone was overheated. At one point I notice the same guy who brought the toy gun at the walk of fame ceremony is talking to a tour bus driving through the alley and informs the driver, Johnny Depp is going to be there (Sure enough in the late afternoon he repeatedly brings back tour buses helping adding to the craziness). People in an earshot are pissed as we know this will cause even more trouble and hassle for everyone with crazy tourists participating as lookie-loos. At least we were all lined up in a somewhat straight line. Billy takes off for Happy Hour and says he will be back later.

Suddenly something happens. Johnny’s bodyguard arrives early around 2ish and starts talking with security. A few minutes pass and the crowd hears a few murmurs with people starting to pick up their stuff. I alert Scotty as he is talking to Billy on the phone and sitting with Anushika, “Dude it looks like something might be happening.” Oh no…we have to move all our stuff and suddenly there is a full on sprint from people. I grab Scotty’s stuff and have him run to save our new spots. 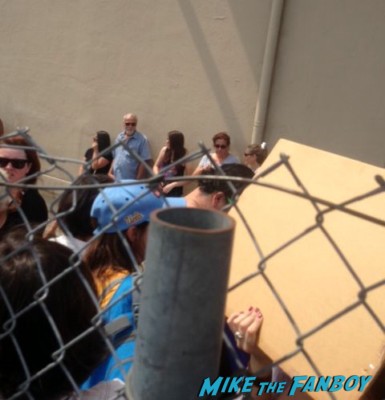 However, the alley is now at least seven people deep and everyone refuses to move. Security comes over multiple times telling everyone to move to clear the alley and leave it open otherwise they won’t bring anyone over. Does anyone listen…NOPE! Billy makes it back, but can’t believe the craziness. 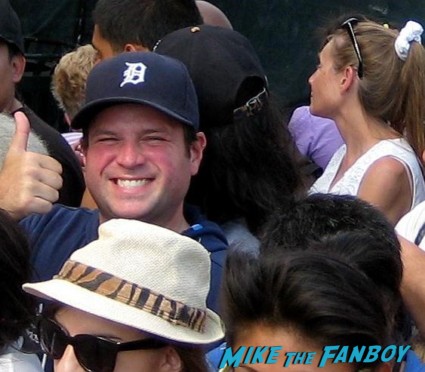 However, the crazy only gets better. A large group of European tourists (maybe 50-75) join the alley group and refuse to move as well, continuing the trend of no one listening. Despite security asking politely (at first) and numerous requests to clear the alley so cars can pass through, Security lashes out and screams at the crowd. Great job guys, everyone has pissed off security before they have even set up the barricade in 90+ degree weather. Now the cops just showed up…wonderful. This is looking even better. 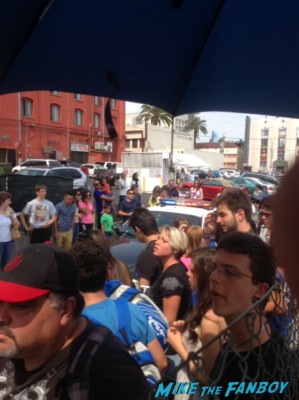 Look its the Cops

Eventually the cops leave after dealing with an “unrelated matter” they speak with an autograph collector. If I wasn’t hanging with Anushika and Scotty I would be really pissed right now especially how difficult it was to get a barricade set-up. However, Billy Beer keeps calling me Mary Poppins because of the umbrella and all we can do is laugh and wait and wait and wait and wait. 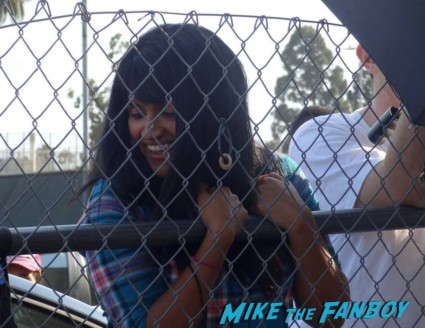 A few creepy Johnny Depp look-alikes (Two that straight up head to toe look like him and one Captain Jack Sparrow) arrive on scene. 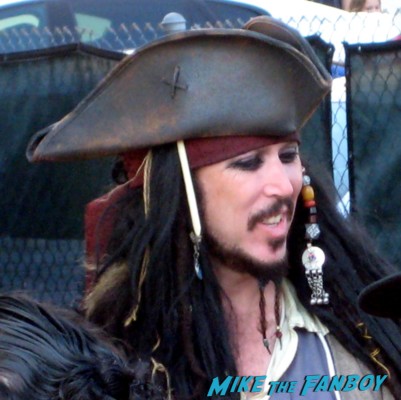 There are some rumblings. Look its Rebecca Romijn, but she’s going inside and waves to the fans. Suddenly, it’s the time we have all been waiting for…Johnny’s arrival. You hear an eruption of loud screams and Johnny motions he will do it afterwards. 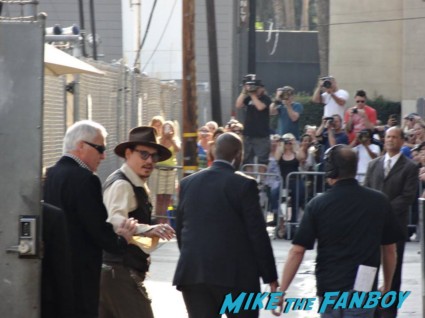 At this point, most are getting grumpy, but I’m still happy to have my umbrella blocking out the crazy sun. Anushika must be in heaven because both Scotty and I are blocking the sun and providing shade in our area, which feels nice except for the crazy people bitching nearby.

What’s happening…Rebecca Romijn is leaving and is coming over. She starts at the barricade, but security says she has a plane to catch and only signs a handful of things. 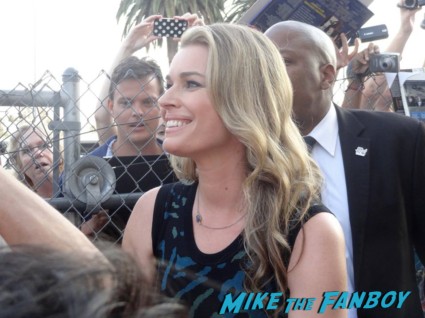 At one point, someone in her entourage starts counting down autographs from five and it looks like Scotty, Anushika, and I will be the last ones. However, someone at the barricade pulls her in for photos and only Scotty gets her before she takes off. 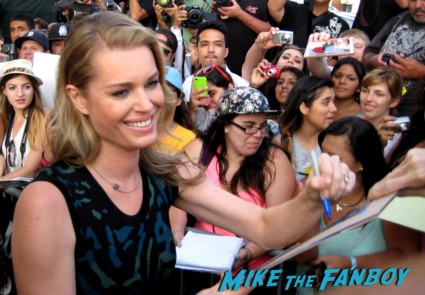 Oh no…murmurs starts to trickle down that Johnny won’t be signing. Someone supposedly talked to his security and said “He has a plane to catch.” Suddenly, there are chants of “Johnny!” which ruins everyone’s voice before he even comes out. Minutes before he actually leaves (around 7pm) people begin to boo because his car pulled up in the alley. The crowd has turned on him before he even has come out. When he immediately pops inside his car, the crying and yelling is ridiculous. One young girl in the front is sobbing uncontrollably and Johnny takes off, but rolls down the window like he wants to sign. 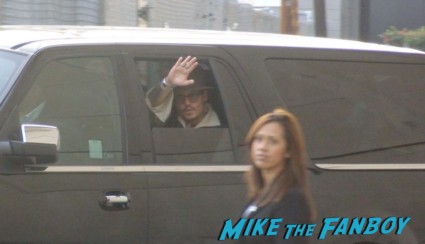 However, his car takes off with security and everyone is screaming various obscenities. When security comes over to break down the barricade one of the regulars has a semi-private talk with him and informs her “A complaint was made and that’s why they didn’t bring Johnny over. One person ruined it for everyone.” There is not a single person who isn’t pissed. I spent at least EIGHT hours waiting, which is less than others, but I don’t thinking anyone left without bitching.

Billy, Anushika and I made our way to Buffalo Wild Wings to grab some food and beer. WE definitely needed a few drinks after that day. We really need those few to really calm us all down with the madness we endured that day. The very next day when Armie Hammer did the talk show (by the way he also ignored fans as well), a few off the die-hard collectors confirmed with one another that Johnny Depp’s stalker was there and that’s the REAL reason why he didn’t come over. Either way, it says something when one of the nicest celebs won’t come over. Whether it was the HEAT, COPS, RUDE COLLECTORS, STALKERS or whatever, this was not the day to be a Johnny Depp fan and collect autographs. By the way thanks Billy and Anushika for contributing the awesome photos! I’m now unfortunately 0 for 2 with Johnny. Until the next time, happy autograph hunting!