Man, you don’t hear stories like this all that often. Joseph Gordon Levitt was at a taping of the David Letterman show and while he is one of the most notorious non signers ever and one of the least fan friendly stars out there, everyone has their day.

Monica headed out to try and meet the G.I. Joe star and had a pretty decent encounter, even though with every good encounter with Joseph Gordon Levitt there’s always a catch.

Check out Monica’s awesome encounter after the jump!

Hi everyone! I just wanted to share my experience I had recently meeting Joseph Gordon Levitt.

First, I would like to say that I’m not a “OMG, Joseph, you’re so cute! Will you marry me?!” fan. I think he’s a talented and versatile actor. I enjoy his movies and love his HitRECord.org, a collaborative production company. Joseph is very proud of his company and is often seen wearing a red button that’s the symbol of his company.

Anyway, I read that he was to make an appearance on The David Letterman Show to promote the movie, Sin City 2, A Dame To Kill For. I was going to be in the city that day so I decided to go and see if I can score an autograph.

I got there at one and secured a spot in front. I bought two of his hitRECord books for him to sign. They’re small books.

As it slowly filled up with more people, I noticed that they have brought posters, DVDs, and large photos for him to sign. I began to worry that my little book was going to be overlooked in this crowd and there goes my chance to get an autograph. A little after three thirty, a black car pulls up and Joseph steps out and waves at the crowd. I start to hear stories that he’s notorious for not signing autographs for fans. I wondered if I just wasted my time.

By five, we had a good size crowd waiting for him to come out. Now I had called my wife earlier and asked her to come and see if she has a chance to get his autograph on the other hitRECord book. I figured that one of us might get lucky and get at least one of the books signed. Twenty minutes later, Joseph comes out and it looks like he’s going to get in the car and go.

I thought, “wow, they’re right. He doesn’t sign autographs.” Then he crosses the street and starts to sign at the left end of the crowd. I’m at the other end. The crowd surges forward and I start to get crushed against the barrier. Posters and big photos are obscuring my view and it looks like I won’t get my autograph after all. It’s a drive by signing as he was working his way to the other end of the crowd. 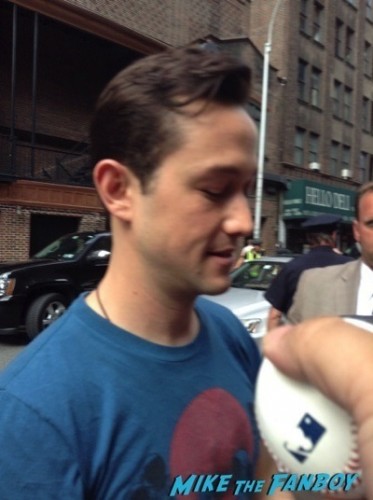 He is just signing his initials on everything quickly. As he gets closer, I stuck my arm out as far as I can and hope he sees the book. Someone’s large photo is in front of my face and I can’t see him. Suddenly, I hear him say, wait, wait.

I still can’t see him. He pushes the photo away from my face, looks at me and asks my name. Surprised, I tell him and watch as he start to personalize my little book. I hear someone in back say, “oh, man!” I’m standing there and I get very nervous. He tells me thanks for bringing the book. I finally find my voice and congratulate him on winning an Emmy for his hitRECord show.

Here comes the bad part of my experience. I ask him for a picture. He said something to me, but I don’t hear him. I suddenly get caught up in the moment and start to act like a teenage girl, begging for a photo with me. I turn to look at him to see if he will and I got the dirtiest, nasty look from him. I felt like I just did the ice bucket challenge in front of everybody.

I got so embarrassed that I shrank back into the crowd. I look down at my iPod and start fiddling with it. I don’t remember getting the book back. He moves on and I look over to see that he shoved the book into the crook of my right arm. I gather myself together and take some pictures.

I make my way out and start to look for my wife. Can’t find her. Just too many people. Then, I see her running toward me, waving the book. She shows me that she got it signed. She tells me that he asked what her name was and she gave him my name to which he responded,”good one”.

She wondered what he meant by that.

I just said that I’ll tell her later. In both books, he wrote my name, signed it Joe and the word, thanks. So now I have two personalized books by him. I think about it later and realize that if he did take the picture with me, he would have to take pictures with everybody else that asked and that would slow him down. I should haven’t asked in the first place. It put a damper on what should have been a great encounter. I just wished he would have politely said no, I can’t and forgo the horrible look that he gave me. It’s the only image that I’m going to remember from that day. Blah. Well, at least I got two autographs out of it. It wasn’t a total waste of a day. Still a fan, but haven’t seen his new movie yet. I’m not sure if I will, though. 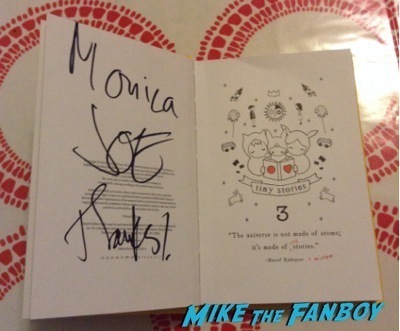