Home / Awesome Anushika • Interviews • Vikings / Talking With Kevin Durand! The Latest Addition To The Vikings Cast! Being A Fan! Harbard’s Agenda! And More!

Vikings is one of the best shows on television. Everyone here at MTF is a huge fan and recently Anushika was able to talk with Vikings star Kevin Durand.

Kevin plays Harbard on the series and is a new addition this season. So far his character’s full intentions haven’t been revealed but I’m sure it will all come out eventually. This is Vikings after all!

Check out Anushika’s interview with Kevin Durand below!

I instantly fell in love with Vikings and the entire cast. I could hardly wait to see the amazing cast on my screen again this month. Oh how I missed Lagertha. Everyone needs a dose of Lagertha in their lives. If you aren’t familiar with the show, you are totally missing out on life. Please do yourself a favor and check it out on the History channel. Seriously, NOW!

We’ll be seeing a few new faces on the show this season and one of them happens to be Kevin Durand, who plays Harbard. He is described as, “A wanderer who turns up unexpectedly in Kattagat when Ragnar and most of the men of the town are away raiding. Harbard will have a profound effect on Queen Aslaug, Siggy and Helga, all of whom have had the same dream, presaging his arrival”. They don’t really reveal any details about his identity. As a matter of fact, they describe Harbard’s character as “Mysterious”.

Thanks to Mike, I got this awesome chance to interview Kevin Durand and I was beyond thrilled about it. I was lucky enough to ask Kevin a few questions.

Kevin Durand sounded so excited and super sweet. He expressed genuine interest in all our questions and did his very best to answer everyone without giving out spoilers. He revealed that his character will have a major impact on the story and its main characters. A game-changer? I think YES! Kevin was asked which episode the fans should look out for as far as his character Harbard, he said episode 4. It seems like that’s the episode where things take a major turn. Is it better or for worse? I guess we’ll have to wait and find out.
How did he got involved in Vikings?

To my delight, Kevin expressed that he is a huge fan of the show and totally wanted to be part of it. When he received pages for the role, he said the words were so “alluring” that it pretty much captivated him. This was something special and he was more than excited to go on this trip.

Kevin being a fan and now an involved cast member, I asked what he thinks separated Vikings from all the other current shows on television. What makes Vikings stand out from the rest? He explained how it revolves around this period of time where its mysticism and beliefs almost makes the story a fantasy like Game of Thrones, but the fact that these stories are derived from real historical events makes the show so special and intriguing to its audience. You get to go behind the looking glass and see how they lived, fought and even struggled with new found cultures and religions. It’s a really interesting take and angel of that time. Moreover, he stated how Michael Hirst brilliantly portray the stories without straying away too much from the historical facts. 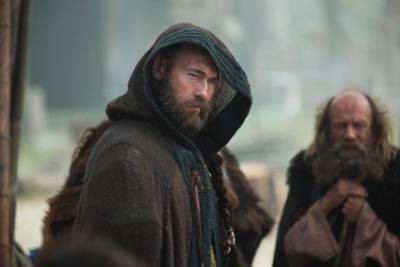 But what about Kevin Durand always playing the role of the villain? Does he ever see himself playing a more romantic or comedic role? Kevin replied by saying that good vs. evil was a lot more simpler when he was younger, but now it’s all about bringing life to a compelling character. He said, “It’s really not my job to judge them”. All humans are capable of doing something grand or horrendous. I guess when it comes to us fans and these colorful characters, we either “Love” them of “Love to Hate” them.

On a lighter note, what about the crew and pranks on the set? If you are familiar with the cast and the behind the scene actions, you know they have a few master pranksters on set. Travis Fimmel who plays Ragnar Lothbrok is undoubtedly one of them. Kevin laughed and said that since he worked mainly with the ladies, the guys really didn’t get much of a chance to torture him. He was surprised at how close everyone was to each other. The chemistry was so interesting and Kevin was overwhelmed to be accepted into the family.

Dee Corcoran is the amazing hairdresser in the show and Kevin was asked if his hair got braided like the rest of the Vikings. Kevin replied, “Yes. My gosh! It’s amazing.” He said that they even added extensions to his beard and the huge braids made him feel like and Avatar. I was completely enjoying his excitement. He was so impressed with their work. Kevin continued on to say that he just wanted to “plug it into some magic dragon and fly away. It was kind of incredible” I couldn’t help but laugh out loud. It was a good thing I was on mute.

I was excited to ask him a few more questions. Seeing his past roles, I knew he had an awesome work-out routine. So I asked if he had to do anything special to prepare for this role or he was already Viking-ready. He immediately started laughing and said, “You know what? I kind of live Viking-ready to tell you the truth.” Not shocked at all. Kevin expressed how it’s part of his life and his obsessive nature to strive to be in the best shape possible. Apparently out of the 365 days, he is on his Viking work out for at least 320 days. Dayum!!! That puts my morning walks to shame. Ha! =D 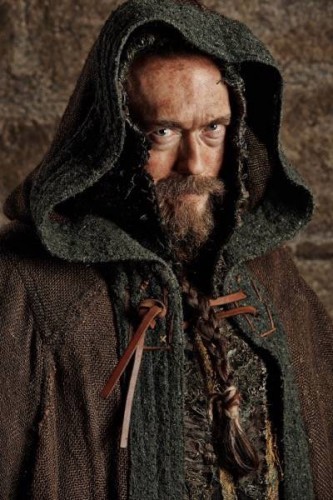 Since tattoos are another major part of all the Viking, I asked Kevin if he’ll be sporting a wicked tattoo during this season. He said yes, but he wasn’t sure if any of them were actually visible on screen. Oh well, I’ll just have to wait and see. The artists added on to his existing tattoos while adding new ones. He said they were gorgeous and very interesting.

I can’t thank Kevin Durand enough for taking the time to answer all our questions. He was super sweet and is absolutely excited about the new season.

Check out History tonight for an all new episode of Vikings!