Home / Fanboying! • Throwback Thursday / Throwback Thurs! I Bring It On After Meeting Kirsten Dunst With A Certain Furry Friend! Autographs! And More!

I was thinking of things this week and I’ve been missing a certain furry friend quite a bit. Sigh. My how we all get older and how time goes by. Theo was just a puppy when we all met Bring It On star Kirsten Dunst. He was so small. I barely remember him at that age.

Scotty, Erica and I were out and about with Theo to meet the Interview With A Vampire star. Shockingly, we were the only ones there and I have to say, Kirsten Dunst was very nice.

Check out this weeks Throwback Thursday below!

What to do… What to do? I have had the pleasure of watching my favorite four legged friend this weekend, and while I love Theo, I just got a notice Ms. Kirsten Dunst is doing a rare Q and A. Sigh… I just can’t leave Theo alone; he’s an eight month old French bulldog and just the cutest thing I have ever seen. So, after a quick google search, I found Ms. Dunst loves dogs, so I figure since there probably won’t be any other people there; I can bring the puppy for a walk, and maybe get a couple things signed in the meantime! 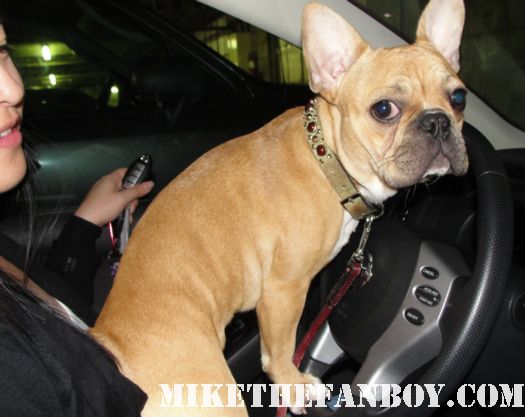 5:32 p.m. – Scotty is on the scene and said about 25 people went in, and there wasn’t anyone else there waiting. I figure its okay to bring the puppy. Even if I just wait with the dog, I could have Erica or Scotty try and get something signed for me. Honestly, today I would rather be with the puppy! Lol, if it wasn’t for Kirsten Dunst I wouldn’t be out.

5:45 p.m. – We just arrived, Scotty was right, there isn’t anyone else here. Lol… It’s a tad barren. Lol… Theo is running around, well to be honest the two of us are running around… 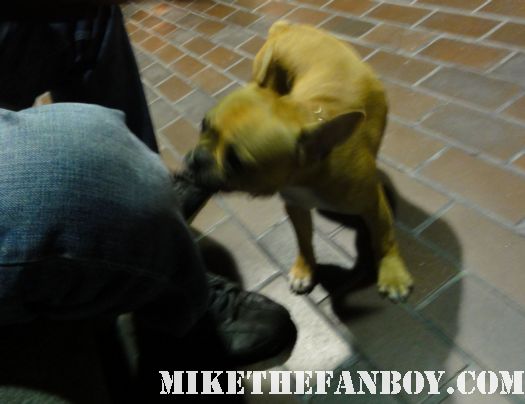 5:55 p.m. – I have wanted to meet Ms. Kirsten Dunst for a long long time. Bring It On is one of my favorite movies of all time, and of course I thought she was wonderful in Crazy/Beautiful.

6:02 p.m. – Scotty brought his Vogue Magazine, and his Interview With the Vampire Laserdisc.

6:06 p.m. – Now, I’ve never had the opportunity to try and meet Ms. Kirsten Dunst so this is really my first attempt. I’ve had this Bring It On poster since the movie came out, so to get it signed will be really amazing. I quote Bring it On all the time. Lol…

6:15 p.m. – A woman came over to pet Theo… Everyone that has walked by has petted him and said how cute he is. Now, why didn’t I know this before? I could have been picking up people with this little pooper 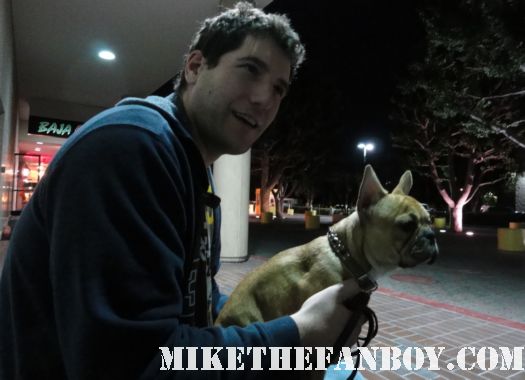 6:43 p.m. – A few cars just went by and I think one of them might have been Kirsten Dunst…

6:47 p.m. – Oh… Oh… I think that’s her… Yep, there she is. I tell Scotty, that’s Kirsten! They get up, but no one says anything, since I was playing everything by ear cause of the puppy I wasn’t planning on speaking up, but since no one else said anything, I asked her to sign. 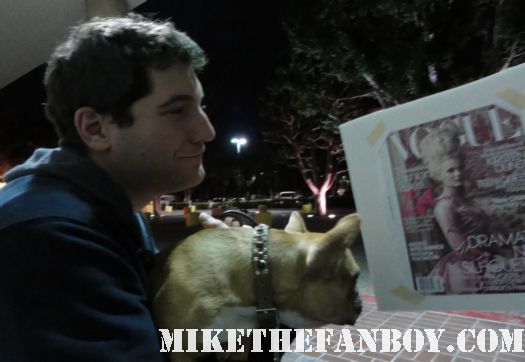 7:14 p.m. – The puppy is sleeping in my lap, he’s so cute. I love dog sitting for him; it’s always a nice treat. I feel like a grandparent to Theo, cause I’m happy to have him for a weekend or so, and I think he likes coming over! Because he gets all the attention! Lol… 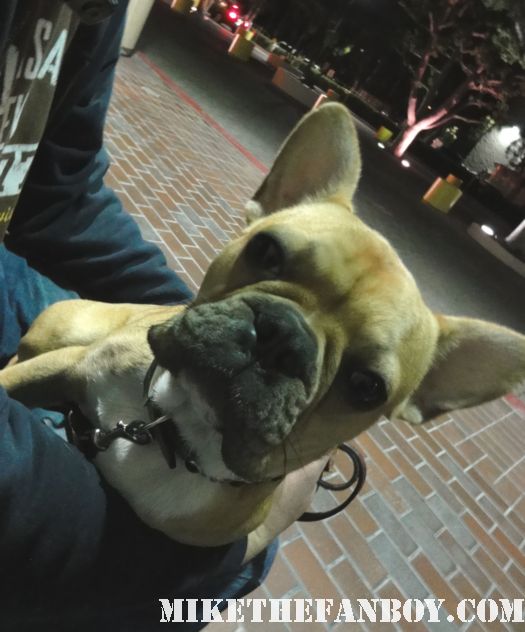 7:34 p.m. – Oh, I see a small group of people leaving the Marie Callender’s. Yep, it’s Kirsten. The three of us don’t move. The way I look at it, she knows we’re here for her, and have already asked once. So, if she’s walking right past us I just figure I’m going to let her decide. It’s just unobtrusive.

7:35 p.m. – Kirsten is walking towards us, and we hear her say to her friend. I’m just going to sign for these guys because they’ve been waiting. 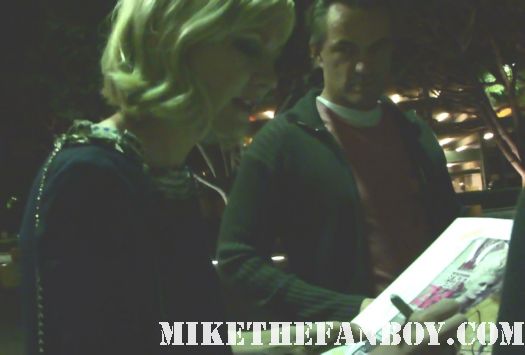 So, we take out stuff out. I have a tight rein on Theo, who just woke up. Lol… Kirsten signs Erica’s first then Scotty’s magazine. Kirsten asked Scotty who else signed his Interview With a Vampire Laserdisc and he said Tom Cruise. 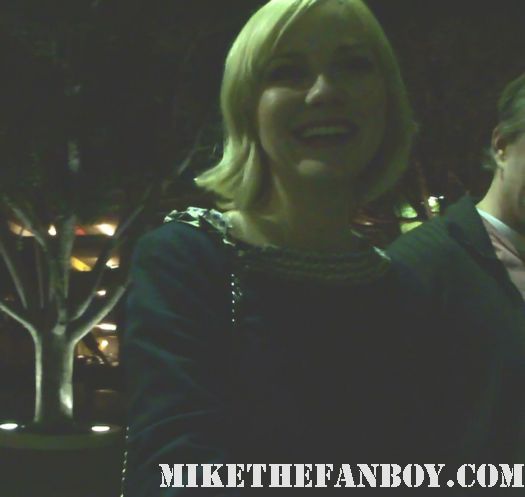 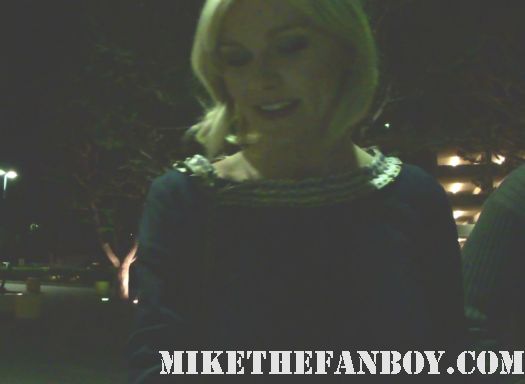 7:36 p.m. – Kirsten then signed my Bring it On poster, and then I asked her to sign the Spiderman poster. She’s super nice, and even told me how cute Theo was. 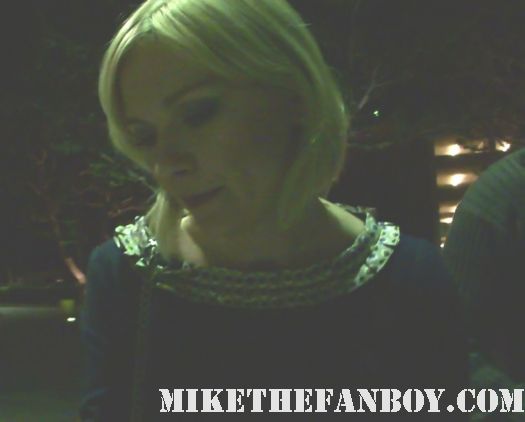 I mean clearly she has good taste! Lol…This was a fun, simple night, and we were the only ones here! 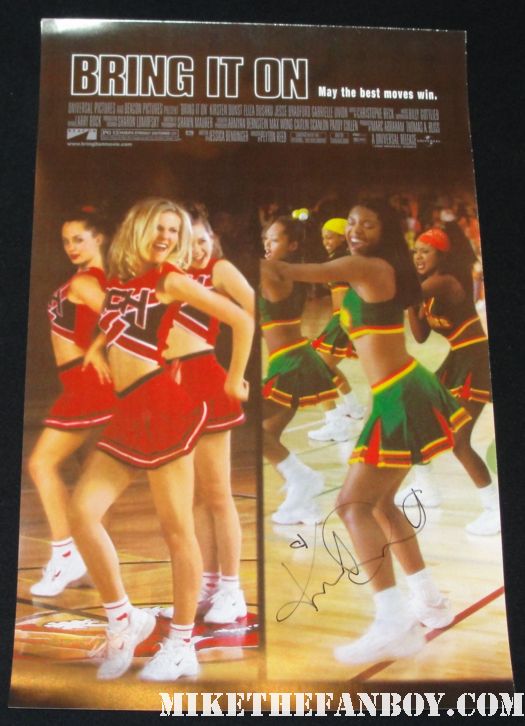 Plus, Theo got to meet his first celebrity! Lol… You can’t ask for a better encounter than that right? 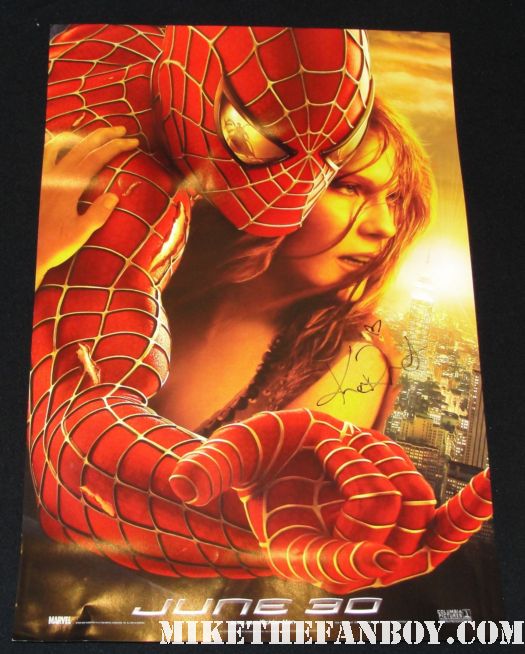 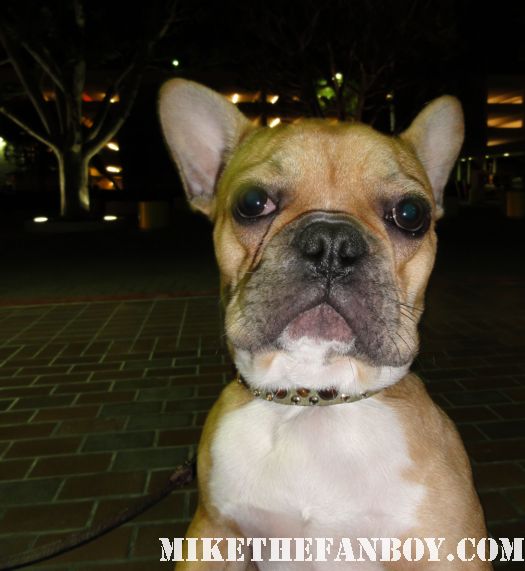