When thinking of what to do on this insane day for Throwback Thursday… I had to do Lady Gaga. Not only is her new album about to drop during this insanity but her new song with Ariana Grande was just released and I really like it!

When I met Lady Gaga during the release of Born This Way she was so nice! And This photo is amazing!

I am running like a bat out of hell. None other than the iconic, the legend, the one and only Ms. Lady Gaga is doing a rare television talk show appearance. I’m heading out on the 405 trying to get there before she goes in and the throngs of crazy people arrive. Sigh… hopefully, that will actually happen. Did I mention how much the 405 sucks? It sucks… blech…

2:45 p.m. – I just arrived… My friend Frank is here, and apparently Lady Gaga arrived, parked, and took pictures with the entire line of people waiting to watch the show. I shit you not… I’m so pissed! Sigh…

3:34 p.m. – I brought my 24 x 36 lenticular Monster tour promo poster. I got it at the Staples Center concert. Sigh… And I have a purple paint pen that would have been perfect on it. Sigh… Ah well…

4:09 p.m. – The show has started. Sigh… A bunch of people that got rejected from the show are here now… sigh… There are like 30 people… Man… That sucks.

4:15 p.m. – Scotty has his Lady Gaga Q magazine with Lady Gaga on the front. He also has a Lady Gaga promo CD. Ah well….

4:54 p.m. – One guy is wearing a red jumper and making a sign with red nail polish. I kid you not. Where the hell do these people come from? Ugh… 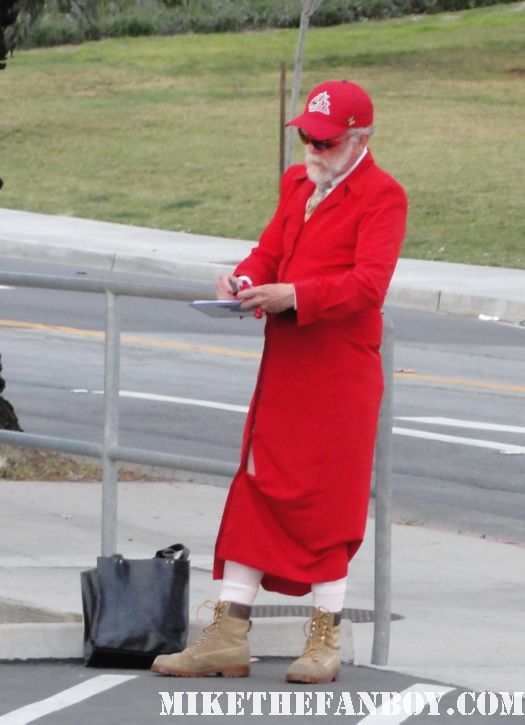 5:34 p.m. – The audience is letting out… Which means even more people yay! Grumble. I’m bitter about missing the photo opp on the way in. lol… The chances of getting a photo now are slim to none.

5:45 p.m. – Some cars are leaving… But none of them hers. There are a couple police officers here to “control the crowd.”

6:06 p.m. – There is a man in a top hat here. I mean really? This is just the strangest group of people I have ever seen.

6:09 p.m. – The officers are telling us everyone has left and they are taking off.

6:15 p.m. – Wow, about 30 people left! Man… I’m still debating about taking off. It’s freezing, and all I had to eat today was a PB and J. Mmmmmmm PB and J. I was a tad creative however; I put coconut between the honey nut jiffy peanut butter and raspberry jam….

6:39 p.m. – Wow, it’s getting dark. Scotty and I are debating about staying or leaving. I haven’t really seen someone stay this long after the show was over before.

6:54 p.m. – So, after placing a few calls and getting the okay to stay, I’m in it for the long haul. I don’t think Scotty ever had any intentions of leaving. Lol… 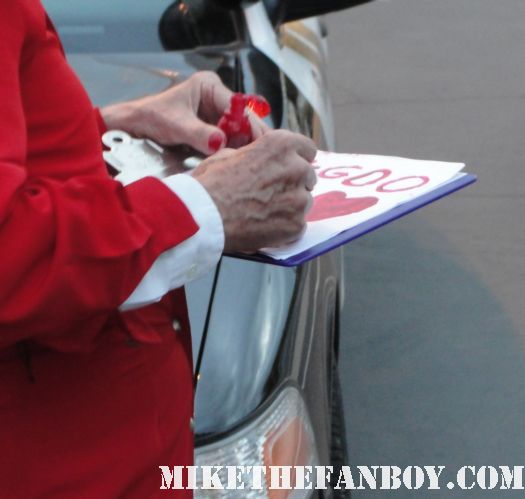 7:12 p.m. – Word on the street is Ms. Lady Gaga who is promoting her new single Born This Way, is doing an interview with CNN.

7:15 p.m. – I know a lot of people are criticizing Born This Way as being a Madonna rip off, but I love it. I mean if you look at it like this, what other pop star could write a song about loving Jesus and loving yourself no matter who you are. That immediately gets respect in my book. I’m just saying.

7:22 p.m. – I’ve been a huge fan of Lady Gaga’s for a long time, but I have to say, I’m not feeling it tonight. There are still like 20 people here and I just don’t think she’s going to stop for everyone. That’s a lot.

7:35 p.m. – It looks like there is some action happening but I’m not certain.

7:47 p.m. – Okay, this is it, she’s leaving. Everyone it lining up, kinda. I have my large Lady Gaga lenticular poster out and I’m holding it up.

7:50 p.m. – One of Lady Gaga’s security guards is getting out of the car. He says, “Okay everyone…. She’s going to get out of the car.” I think I just shrieked! The security told us to line up behind the metal barricade. 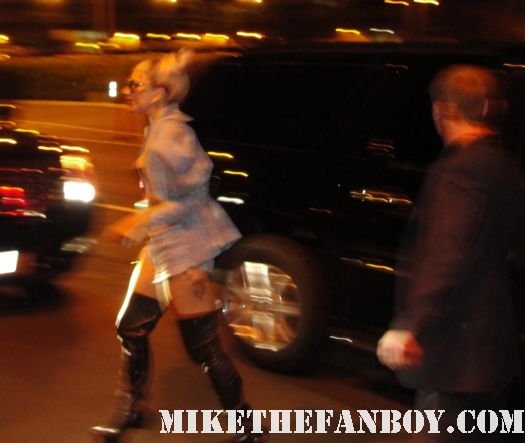 7:51 p.m. – There is a massive stampede I’m six foot three and can’t climb over the railing. I’m getting slow in my old age. Frank grabs my poster and helps me over the railing. Everyone lines up, and Holy shit… There’s Lady Gaga. She gets out of the car, and starts signing down the line. 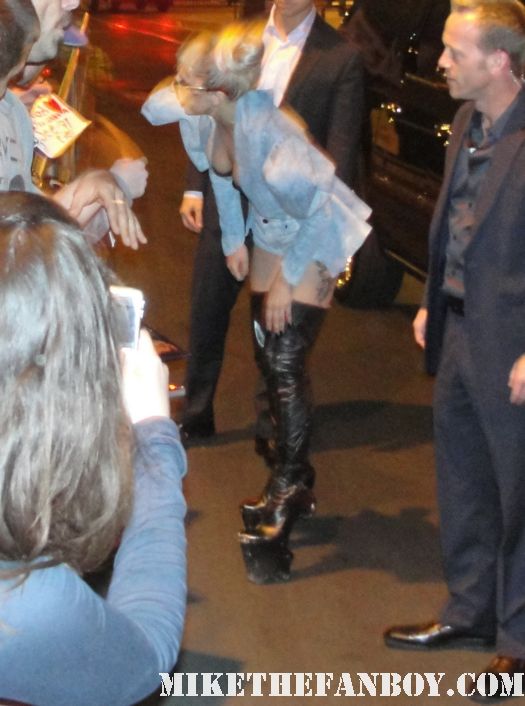 7:52 p.m. – Lady Gaga signs one each, personalized and does a photo with everyone. Scotty got his magazine signed and a photo. I’m farther down the line. But I can see him getting his photo. 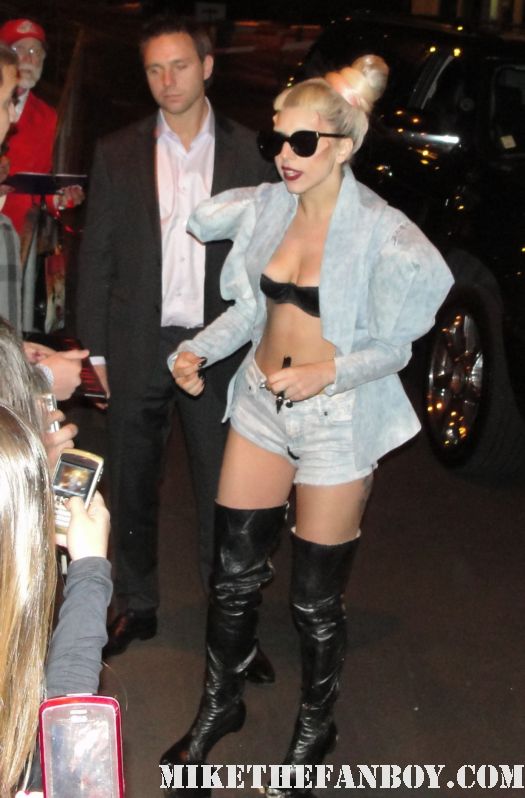 7:54 p.m. – I have my large lenticular poster on a board and I’m getting everything ready. Lady Gaga is signing most things, “Born This Way, Lady Gaga.” I’m dieing! 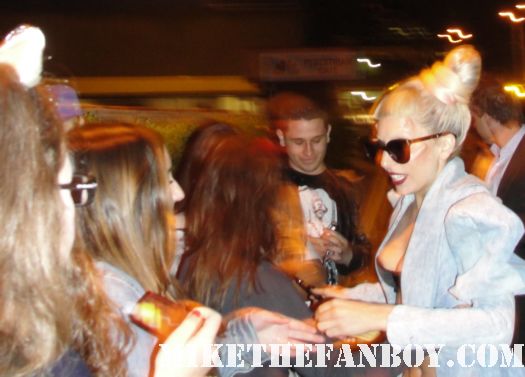 7:56 p.m. – Lady Gaga is right next to me now. I ask to sign my poster with my purple paint pen and I ask her to make it to “Mike, My little monster.” And I shit you not Lady Gaga writes it so perfectly. I told her how I got in on the tour and I never thought I would get it signed. Yes, I babbled like an idiot. Sigh… Such a Mike thing to do. Lord have mercy! 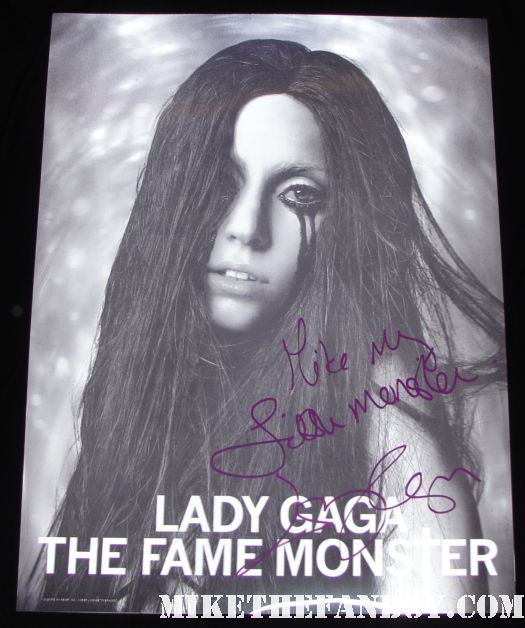 7:57 p.m. – Then I asked for a picture and Lady Gaga takes a photo with me. I can’t believe it. I just hugged Frank cause I am so excited! I can not believe it! 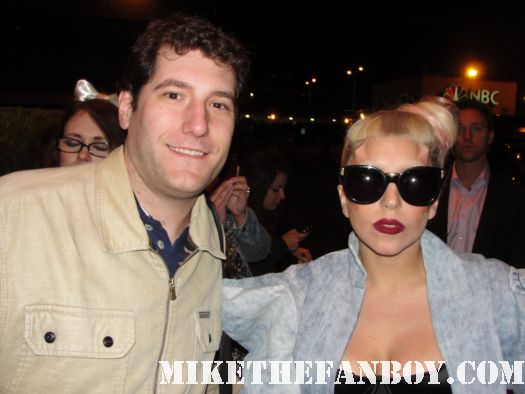 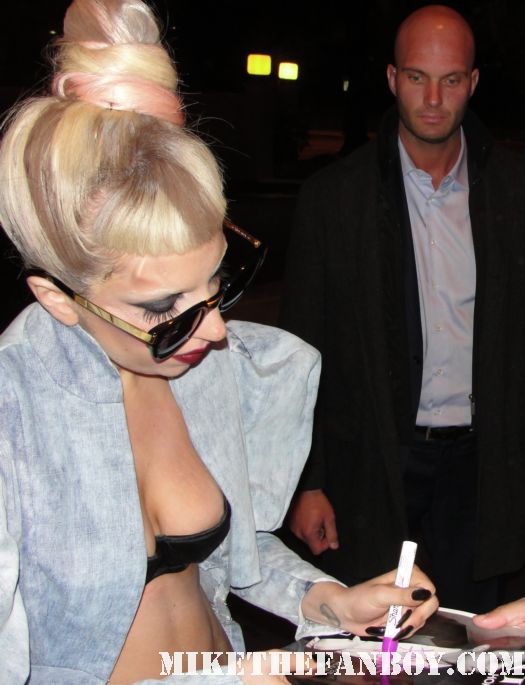 7:58 p.m. – Lady Gaga does the full line of people, and her car followed her down the line the entire way. Everyone got one thing singed and a photo if they asked. You could not have asked for a nicer moment. 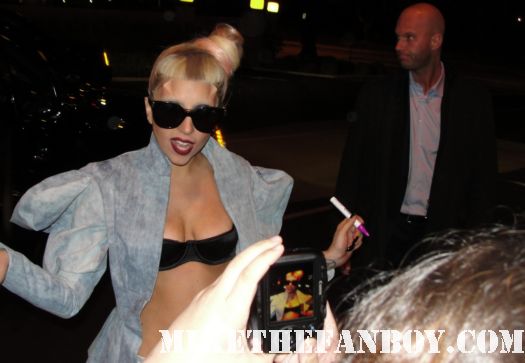 7:59 p.m. – I’m still in shock. Lady Gaga just left and was so kind to every one of her fans. You know it’s such a wonderful thing, when someone is so on top, and still takes that kind of time. I’ve gotten people before they were huge, after their fame has passed, but getting someone at their pinnacle… It’s such an amazing moment. I don’t think I will sleep tonight. Seriously, I am so excited! Dieing! DIEING! 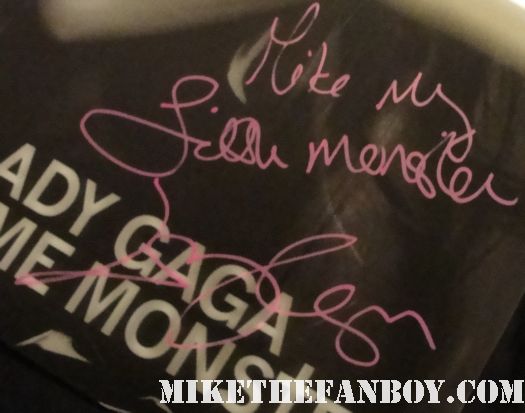