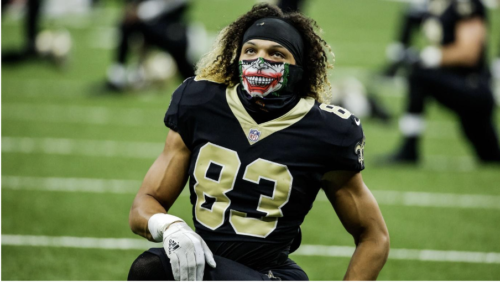 Well-experienced NFL wide receiver Willie Snead has parted ways with the Las Vegas raiders this past Tuesday, and his agent confirmed it was a mutual release as the veteran wasn’t finding much time on the field. “He wasn’t playing much and asked for a release,” Drew Rosenhaus told ESPN’s Adam Schefter.

Having participated in a mere 7.9% of the offensive snaps this season since signing with the Raiders back in March, Snead wasn’t finding the playing time he desired. With seven games played, he received five targets, catching for a very minimal 32 yards.

Before arriving in Vegas, Snead initially arrived in the NFL from Ball State as an undrafted free agent in 2014. Following two cuts, he eventually signed with the New Orleans Saints and sculpted a key role for himself within the rotation whilst owning 149 catches for 1,971 yards and seven touchdowns throughout the three years he played there.

In recent years, Snead played for the Baltimore Ravens. During 2020, he played 13 games and held onto 33 of his 48 targets for 432 yards and three TDs.

This time it’s a 33-yard TD to Willie Snead#Ravens up 28-0pic.twitter.com/MbhXYJ0r9R

It became evident that Snead had walked into a lesser role in Vegas than he’d previously owned in New Orleans and Baltimore, ultimately seeing the Raiders – similar to how they dealt with John Brown – agreeing to release the veteran who’d made little difference at the team.

Snead being cut before the trade deadline sent him straight into the free agency pool; if he’d been released a week later after the deadline, he’d have been subjected to waivers. However, Willie Snead’s time as a free agent didn’t outlast a week.

Snead took to social media, “God closes doors to open another one.”

Snead isn’t new to the Panthers locker room; he was on the Panthers practise squad in 2014. He attended camp with the Browns that summer as an undrafted rookie from Ball State.

Seven years later, he’s been added to the Panthers practice squad again, almost instantly after his release from the Raiders. Panthers’ management decided to move defensive lineman Frank Herron on the injured reserve list, allowing Snead to begin training. So, next time you’re hunting for NFL picks on the Panthers, Snead could be assisting your wagers.

Willie Snead IV’s been making catches like this all camp. pic.twitter.com/uGZM33Irk8

How Can Snead Assist the Struggling Panthers?

Well, it’s safe to say the Panthers 2021/22 season has delivered its highs and lows stemming from a 3-0 start that’s resulted in a 3-4 overall record.

Wasting no time, offensive coordinator Joe Brady has already hinted that Snead could play a role in Sunday’s meeting with the Atalanta Falcons. Snead has a familiarity with the system from his time spent with Brady in New Orleans. And let’s be completely honest, the Panthers’ offense could do with all the help available right now.

Snead was highly touted across his first two seasons with Saints, but as the team leaned on Alvin Kamara and Michael Thomas the following year, his rise to the top was stunted. His time in Vegas didn’t go to plan, but a position on the Panthers squad could certainly boost a career resurgence.

Snead has a sleek route-running ability and trustworthy ball skills that could undoubtedly assist the Panthers. Of course, D.J. Moore and Robby Anderson are already the Panthers most reliable receivers. However, the latter is struggling to find his feet and with Terrace Marshall Jr. still under concussion protocol, this new arrival good pan-out perfectly.

In addition, Snead’s potential of becoming an open target quickly makes his acquisition intriguing. The wideout’s best work can be found out of the slot, which could help Sam Darnold with an idealistic security blanket.

This Panthers’ offense cannot worsen; implementing Snead into the game plan can only help their drastic situation. With little risk and a high-reward potential, the newly signed player could prove his doubters wrong.

Snead has tons of experience and is 29-years-old; when including the low miles he’s delivered, we shouldn’t be shocked to see him playing in Week 8’s game.

After coming from the Raiders, where his potential was overshadowed, motivation could be higher than ever, and this will benefit the Panthers should everything play out smoothly.