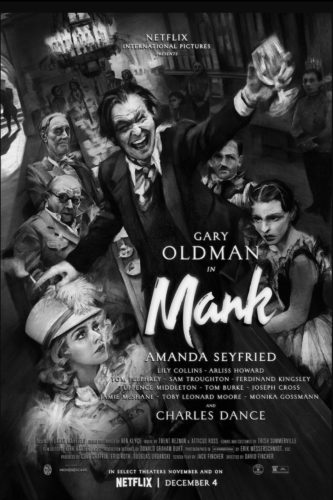 Hollywood’s history continues capturing the hearts of moviegoers seamlessly generation after generation. Classic Hollywood has helped inspire fan films around the world to attend arthouse revivals, special screenings, drive-ins and various film festivals celebrating its rich history to learn about the past. There’s something invigorating and inspiring recreating the Golden Age, but then again should Oscar bait get a pass? David Fincher’s first feature film in six years “Mank” might contain a tour-de-force performance by Gary Oldman, but it’s nothing more than a great glamorous showcase in an otherwise meandering movie.

“Citizen Kane” is widely considered the greatest film ever made and Orson Welles’ magnum opus. However, a longstanding and controversial theory revolves around the authorship of how much did Orson Welles really contribute. Inspired by Pauline Kael’s infamous New Yorker article “Raising Kane,” the film focuses on the life of Herman J. Mankiewicz (Gary Oldman) and the struggles of production leading up to the film’s release. Told in nonlinear fashion, filmgoers learn about Mankiewicz’ relationships with Orson Welles (Tom Burke), Marion Davies (Amanda Seyfried), William Randolph Hearst (Charles Nance) and others as he races to write one of the finest film scripts ever. 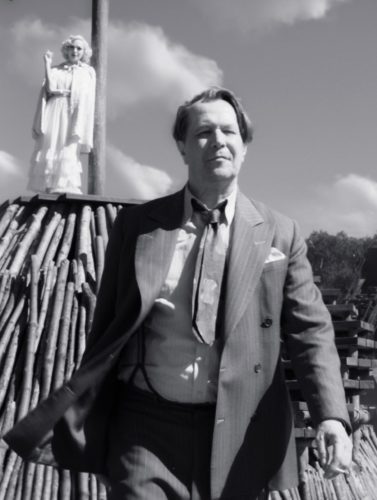 Originally conceived to be David Fincher’s follow-up to “The Game,” his insistence on black and white proved futile as he was never able to film Jack Fincher’s script before his death in 2003. Considering the delay, it’s debatable “Mank” really was worth the wait. This passion project certainly comes across as a way to remember Fincher’s father, who was once the San Francisco Bureau Chief of Life magazine, and tell a Hollywood story in an old-fashioned way. The film’s frequent flashbacks and stylized script certainly echoes classic cinema without ridiculously rewriting history and/or pushing an agenda unlike Ryan Murphy’s recently released “Hollywood.” For film fans and “Citizen Kane” buffs, it’s a must watch and that’s largely due to Gary Oldman.

Academy Award winner Gary Oldman provides another stunning showcase with a wonderful performance. Oldman oozes sleaze and glamour, echoing a combination of Ray Milland in “The Lost Weekend,” Humphrey Bogart “In A Lonely Place” and William Holden in “Sunset Boulevard.” Oldman’s staggering drunkenness and unlikability is a testament to David Fincher’s directing, Jack Fincher’s script and Oldman’s ostensibly dedication to crafting a fully-flushed character. He’s a despicable, yet delightful drunkard everyone can’t resist with his entertaining antics and only gets a pass because of his talent. Oldman not only maintains your attention, but certainly keeps you entertained throughout, making viewers feel passionately one way or another about him. Sadly, the same can’t be said about the rest of the cast. 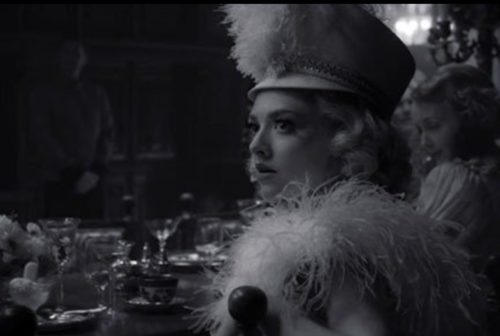 Outside of Amanda Seyfried and Charles Dance, the rest of the cast is very forgettable with maybe Arliss Howard (Louis  B. Mayer) and Tom Burke (Orson Welles) also worth mentioning as there is no real character development. Seyfried has a few fun moments and Nance’s menacing demeanor definitely dominate the screen with their powerful appearances. However, “Mank” ridiculously relies on viewers to know Hollywood’s history and assume who everyone is, often times not mentioning/acknowledging names well after being introduced. You have Hollywood luminaries and icons being portrayed such as George S. Kaufman, Greta Garbo, Josef Von Sternberg, Norma Shearer, Charlie Chaplin, Darryl F. Zanuck, Irving Thalberg, etc., yet the film does very little to remind you who is who. Most of the time, it’s a guessing game resulting in an incoherent mess frequently forcing viewers to understand and accept “contemporary” references. Honestly, if you haven’t seen “Citizen Kane” and don’t possess a somewhat rudimentary knowledge about Hollywood during the 1930s and 1940s, “Mank” is not worth watching. Still, the film assumes absolutely way too much and expects all of its audience to adhering with these bare minimum requirements to fully appreciate. The background of characters should’ve been more well-developed and takes for granted every viewer will recognize all the references throughout. It’s a tedious, time-consuming throwback only the biggest cinephiles will appreciate.

Herman J. Mankiewicz was a prominent writer in the 1920s and 1930s, but his “baby brother” Joseph L. Mankiewicz had a more prominent film career. As a matter of fact,  Joseph L. Mankiewicz did the unthinkable and won consecutive Academy Awards for both Best Director and Best Screenplay for “A Letter to Three Wives” (1949) and “All About Eve” (1950) garnering 10 Academy Award nominations (4 wins) as a writer, director and producer during his distinguished career. Although it was not Joseph L. Mankiewicz  or any of the other Hollywood Legends’ story, the film felt all over the place with introducing iconic characters and having them intermittingly come and go, often times as background characters and “set decorations.” For me it was a frustrating film choice and disappointing love letter to Hollywood in desperate need of a hard rewrite. 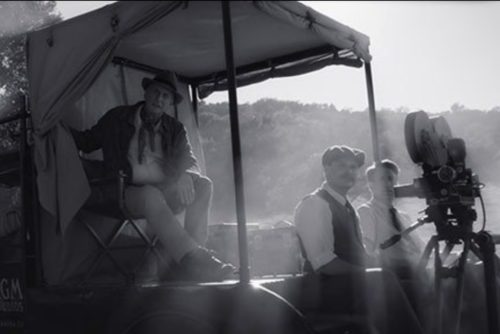 Nonetheless, outside of Gary Oldman the behind the scenes team did a fantastic job and deserve just as much credit! Frequent Fincher collaborators and Academy Award winners production designer Donald Graham Burt, editor Kirk Baxter, and composers Trent Reznor & Atticus Ross, made a terrific throwback film. Fincher certainly knows how to assemble a team and maintain an impressive crew. However, the real coup is “Mindhunter” cinematographer Erik Messerschmidt who shot the film fantastically in B&W and is an absolute frontrunner for best cinematography. Not only did Messerschmidt meticulously recreate the era visually, it pops like classic Welles and the Golden Age Hollywood.

Overall, “Mank” is the type of film you immediately rush to watch because of the director and lead actor, but don’t expect too much. It’s a clumsy, convoluted film only elevated by brilliant behind the scenes work and an amazing performance anchoring an otherwise average movie. “Mank” will have its ardent admirers, but it’s essentially “The Artist” meets “The Aviator.” Maybe if Aaron Sorkin, Steve Zaillian or Eric Roth punched up the script to make it more entertaining than a one-dimensional showcase for Gary Oldman “Mank” could’ve been great. However, like the real Herman J. Mankiewicz, this will soon be another average biopic and just another footnote with an overrated Oscar Bait biopic.

“Mank” will be streaming worldwide on Netflix starting December 4th.