Home / Fanboying! / Marissa Tomei Goodness! Barnaby Has The Good Fortune Of Meeting The My Cousin Vinny Star In New York!

I love hearing stories like the one below sent in from MTF Reader, and clearly awesome all around guy, Barnaby! He had the opportunity (clearly before COVID protocols put everything in lockdown) to meet the iconic Marissa Tomei!

To say I’ve loved Marisa Tomei for years is an understatement. The moment I saw her unforgettable, hilarious, scene stealing and deservedly Oscar winning (yes, she deserved every inch of that Oscar!) performance as Joe Pesci’s wisecracking, out of work hairdresser automobile expert Mona Lisa Vito in 1992’s My Cousin Vinny, back when I was 12, I have adored her, and loved so many performances of hers since then – Untamed Heart, Only You, Unhook The Stars, Oscar nominated work in both In The Bedroom and The Wrestler, and so on and so on! What Women Want, The Paper, the recently released Frankie, and the list could still go on!

I wrote to Marisa around 1995 when I was 15,, and was delighted to receive a signed photo of her from The Perez Family, which I cherish to this day.

Marisa has always been someone I’ve wanted to meet, and I never dreamed it would be possible. But on Halloween, October 31st 2019, that dream became a reality.

I live in England, and was on holiday in New York City for over a week, and had enjoyed an amazing time at Chiller in nearby New Jersey upon arriving, with wonderful moments with Nancy Allen, Melissa Gilbert, Tatum O’Neal, Danny Pintauro, Michael Beck, etc, and thought that would be it for my week in The Big Apple, and it wouldn’t get any better than that.

While I was in New York, I discovered that Marisa Tomei was currently starting on Broadway in The Rose Tattoo, and was receiving rave reviews. I was over the moon to discover this was happening while I was over there, and wanted so much to get a ticket, and was a bit worried I wouldn’t be able to afford it, as it had been an expensive holiday. My luck was in, however, when my New York friend Steven was able to get me an amazing discount for a ticket to see The Rose Tattoo, just 46 dollars total, instead of 200 bucks or so, and I immediately grabbed it! (Thanks again, Steven!)

I saw The Rose Tattoo on my last full night in New York, which was Halloween, October 31st 2019. The seat Steven got me was terrific, and I couldn’t believe that I was going to be seeing one of my favourite film actresses acting on the Broadway stage!

Marisa and the play and her co-stars were all wonderful, I had known nothing about the play having not read anything about it and I hadn’t seen the famous film adaptation either, and I enjoyed it so much. Marisa was astounding, and I think I led the standing ovation at the end of the play! I leapt to my feet and cheered, and lots of others followed my lead.

I raced to the stage door straight afterwards, and the security guard was polite, and only a couple of other people came backstage too, I thought maybe there would be a huge crowd, but I’d say there were just five or six of us, which was great.

Some of the other actors came out first of all, and all were very friendly and chatty. And finally, about 20 minutes later, out came Marisa Tomei…

For a moment I had completely forgotten it was Halloween, and I did a double take when I saw that she was dressed up in a fabulous costume! She was obviously on her way to a Halloween party after the performance. She looked absolutely beautiful, and she was so smiley and friendly to the few of us wanting to meet her.

I was first in line, and she came up to me first. I managed to say that I was from England and was going back home tomorrow, and it was such a pleasure to have seen her onstage, and she was wonderful. She was very gracious and thanked me. I asked if I could take a selfie, and she said or course. And I managed to take a selfie with her. She also signed my programme and a magazine cover for me. 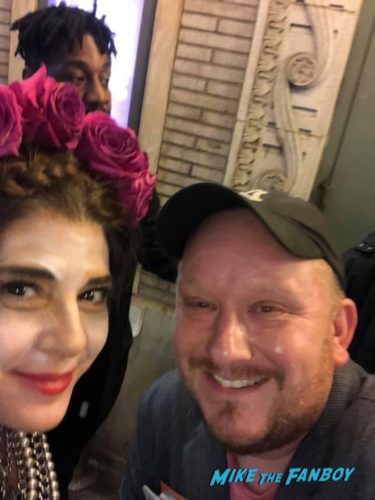 Before she was about to get in the car waiting for her, I noticed other fans were getting pictures taken with her rather than selfies, and I asked if I could do that also, and at first the security guard was about to protest, but Marisa herself said she didn’t mind and it was okay, and she posed right next to me, and a kind lady took the photo for me, and it came out beautifully! I’m so glad I quickly asked if I could do that too, it’s a great photo. 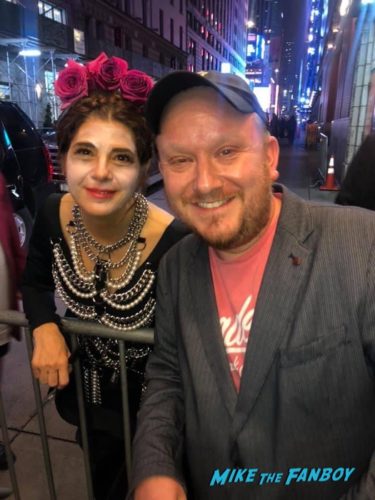 Marisa thanked all of us, and waved goodbye as she got into her car, and we called out have a great time at the party, and she thanked us again, and off she went!

I was absolutely buzzing, and so happy when I saw the photos, and the signatures too. I immediately contacted my partner Mark back home in England, as he adores Marisa too! With the time difference, he was fast asleep and my text didn’t wake him up, but a few hours later he replied: