Home / Fanboying! / Meeting Bill Murray While Riding A Scooter At An Assisted Living Facility! Justin Gets The Reclusive Star While He Films His Latest Movie!

MTF Reader Justin had an amazing encounter with SNL and comedy legend Billy Murray! I have to tell you, he’s one of the people I would most want to get right now. He’s a tough one to crack but he’ll do it sometimes.

Justin had an amazing encounter with Bill Murray while he was filming in New York.

Bill was riding a scooter at a retirement home and stopped! (You can’t make that up! LOL)

Bill Murray has been filming St. Vincent in New York for much of the summer. The film co-stars Melissa McCarthy, Naomi Watts and Terrance Howard. Not surprisingly, the set has generated large crowds and security I had heard was very, very nasty. The set most days was in a remote part of Brooklyn so I put off going out there since one can never be sure who is on set until they go and Bill has a rep for being very tough to get.

Several people I know whiffed. Although I heard a few people got a pic with him. Last week I saw that the set was moving to an assisted living facility on Long Island for a Wednesday shoot. On the map the location looked very remote so I felt this was a great chance to meet Bill. Alas, I could not get down there that day but was delighted when I saw they were back at that spot on Saturday of that week. (The film doesn’t shoot on Thursday or Friday).

Saturday I headed down there at about 430 figuring they would wrap for the day between 5 and 6 and that would be my best shot. The location was even more remote than I thought. The trailers and film trucks were behind a fence that said “Private Property, Trespassers will be Prosecuted” and the assisted living facility was the only thing on the street save for a small gym. There was literally no one but crew around. I stood outside the gym and saw crew members walking to and from the facility and the fenced in area.

At about 5:30 I saw a black SUV pull out of the fenced in area and stop in front of the Facility and a BMW followed suit. During this time racks of what looks like woman’s clothes were being shuffled to the fenced in area. I wondered if Murray was even on set. Then I saw Naomi Watts emerge from the Facility. I wanted to approach her as I have never met her despite the fact that she filmed Fair Game at an office building I used to work in several years ago. However, I didn’t approach as I did not want to alert security that I was waiting for autographs and possibly cost myself a shot at Bill if they were as nasty as I had heard.

Naomi got into the BMW which drove off. A very large security guy and an older man emerged from the Facility it was Bill! Bill stopped to chat with the crew outside of the building and I had a dilemma as to if I should approach. Once he got in the car i knew my chance would be gone as there was no way he would walk from his trailer to the fence and the fence was high enough that I would have to throw my items over and he would have to toss them back if he made it to the fenced in area. I also doubted he would tell the driver to stop for the guy waving a sharpie and memorabilia on the sidewalk if I tried to flag down the car. I did not want to interrupt his conversation though. Then I noticed he had a scooter with him and so did the security man. I thought are they going to scooter to the trailer? 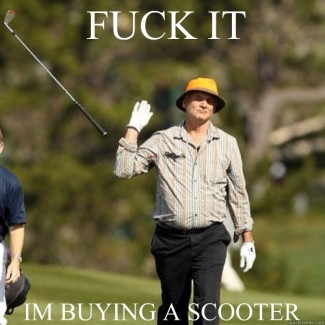 Figuring my best chance was to intercept the scooter I walked to the sidewalk area in front of the fence figuring they had to go past my to get to the trailer. A minute later they began scootering with security in the lead by a wide margin. The guy saw me and stopped. He was very nasty and stated that Bill would not be stopping. Then Bill stopped behind him and walked up to me. He asked me what type of bike I ride and signed my item. I went to get a pic of him with my camera but the guy knocked my camera down and told me I was lucky enough to get a sig and that was enough. He and Bill then resumed scootering to the fenced in area.The signature was a full later one so I was thrilled. I was even more thrilled when a friend texted me and told me Spike Lee was appearing two hours later to introduce “Uno Noche” which his company was involved with at a small theater in the City. Spike was very nice but would only sign “Uno Noche” posters which I was lucky enough to score from theater staff.