Home / Fanboying! / I Go Overboard Trying To Meet Goldie Hawn But Fail! However, I Get To Meet Snake! Mr. Kurt Russell!

Man, I’ll tell you this weekend has seen a bunch of disappointments.

One of the disappointments I had was also an awesome success.

Sadly I’ll admit right now, I don’t have any pictures as it was such a random last minute thing. Sorry.. I try, but…

Scotty and I got a last minute tip that Goldie Hawn was out and about. Scotty dropped everything and raced down there. I ran home and like a deranged whirling dervish somehow managed to grab a couple things for Goldie Hawn and I grabbed my Escape From New York mini poster as well.

Now, I did this in four minutes. The keys were in the front door lock, the door was wide open and I went through two books of posters and the stack of randomness on my desk.

Yeah, I was crazed.

I got to my car, on the freeway and was racing all the way there. Now, we hit traffic and everything stopped. STOPPED.

Scotty said no one had left yet, so I was like… Okay, I’ll be fine. The accident cleared up and I made it down there.

Now, there were only about 6 of us at this event and finally we found out where Kurt Russell and Goldie Hawn were going to leave from.

Scotty had to leave, so he took off. TLC was in the house and we listened as they sang an acoustic version of Waterfalls inside and a couple random people came out to smoke.

Other than that… We were just waiting.

Finally Kurt Russell and Goldie Hawn walked to an adjacent door but didn’t give us the time of day. Doh.

Now, I have to tell you, I love Kurt Russell… But I LOVE LOVE LOVE Goldie Hawn. I’ve never seen her, never heard her be out anywhere, and I have loved her since I saw Laugh-In reruns on Nick at Night. Private Benjamin, Protocol, Death Becomes Her, Overboard, Etc… Love love love.

Most everyone else here went off to the front and it was me and one other collector.

I just felt like the two of them wouldn’t leave from the front, it didn’t make sense. It was a party for their daughter, and I couldn’t see that happening.

I brought an Overboard mini poster, Private Benjamin mini and like I said, my Escape from New York mini poster as well.

Then I spotted Kurt Russell calling the car. The two of us slowly walked over. The car pulled in and we asked politely if they would mind signing. I yelled for Goldie, but seriously, the way the car was, she bopped right inside, She might not have even heard me.

Kurt walked on over and was so kind. He signed two for each of us. Very nice. Great autographs, and super awesome. 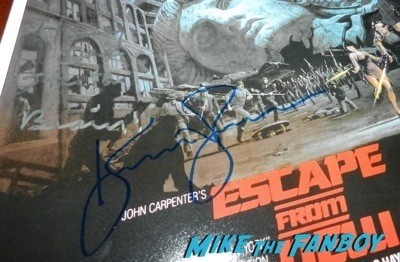 But the whole time, I wanted to ask Kurt to get Goldie to sign the poster, but I just didn’t want to take advantage of his kindness and Goldie Hawn was right there in the car next to him.

There wasn’t much I could do to be honest, and I’m very thankful for my partially signed Overboard poster and My Escape from New York poster as well. 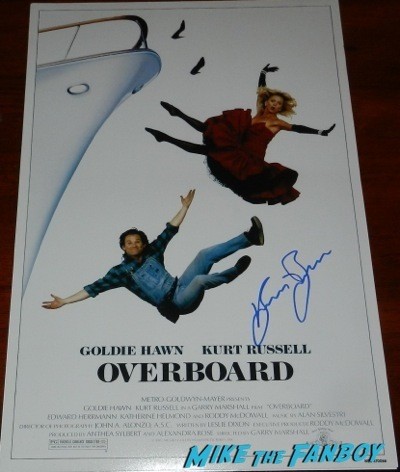 But right now, Goldie Hawn is number one on my most wanted list and she was just sitting in the car!

Speaking of next times… Until next time kids… 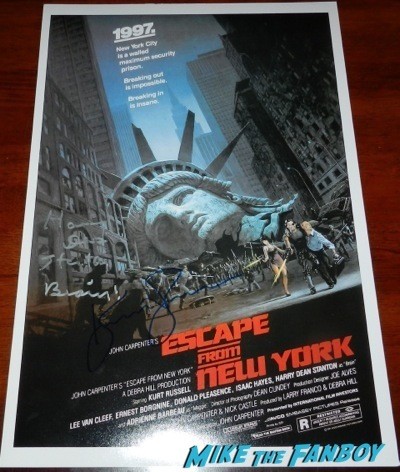