Home / Chuck Our Man In Texas • Fanboying! / Chuck’s Going To Knock You Out After Meeting LL Cool J & Ice Cube In The Great State Of Texas! Autographs! Photos! And More!

Ice Cube has been a tough one for me. I need the guy on one thing, (My Three Kings mini poster) and I still haven’t been able to get him! Doh… Chuck, Our Man In Texas however had better luck than I’ve been able to have.

Not only did he meet Ice Cube but also LL Cool J as well. Not too bad for one night out!

Check out Chuck’s full recap after the jump!

Ice Cube and LL Cool J are currently on a Rock the Mic tour, and their last stop was in Houston, before heading on to LA. Last time Ice Cube came through town, at the House of Blues, I was unable to get him. I needed him on two items to complete them, (I know, I’m OCD.) LL Cool J was just an added bonus.

Anyways I got to the venue around 8:50pm last night, and found out that Ice was not even on stage yet. I finally saw him come off the bus at 10:20pm and I asked him to sign. He told us he would catch us after the show. Sigh…another few hours to wait.

Around 10:45pm, LL’s bus pulled up and parked. As soon as he was parked, LL walked off and ran into the venue to check things out. He finally came out about 11:15pm and signed for the few of us by his bus. I managed to get him on his book, but no picture with as his security was rushing him onto the bus to get ready for his set. 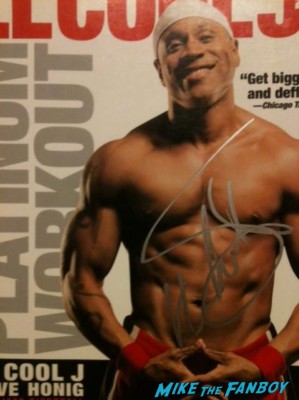 Around 11:45pm, Ice came out and was walking towards his bus, and we asked him to sign again. He told us he needed to cool off then would come out and take care of us. Good Lord! This was the 2nd time he blew us off! I was determined to get my stuff signed, however, so I stayed. Around 12:15am, his security guy came off the bus, and told us he would take our stuff on the bus and get it signed for us, that Ice had decided not to come back off. ARGH!!!!!!!!!!!!!!!!!!

Oh well at least he was cool enough to do that. I sent my two dvd covers on board and got them back with a nice signed
ICE CUBE!!! 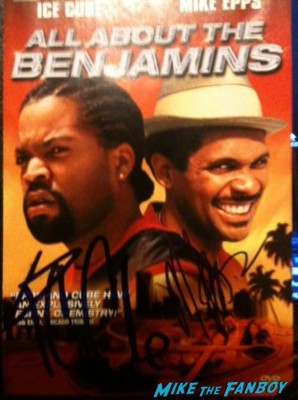 I thanked his security, and hung out for about 15 more minutes to see if he would come off to try and get a picture with him but he did not. So I headed home as I was tired. Tired, but very happy to complete two more things for my collection. 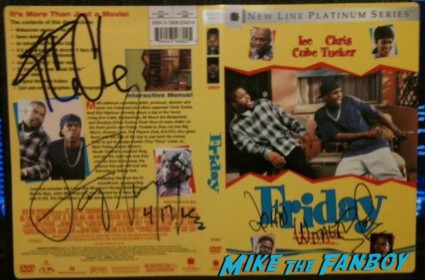