I was thinking of what to do for TT and I thought… Viggo! I was just talking about Viggo with my friend and this is the one and only time I’ve ever met him.

It was a random day for sure, and I had to really think about that day. It was a lot of fun. Erica and I headed out and let me tell you, times sure have changed. I was actually shocked that Charlize Theron wasn’t nice! I know!!!

Ah, this is one of those weeks where you have to pick and choose your battles. It is the week of the AFI festival. This is shaping up to be a pretty interesting year. So far, from what I have hear and from personal experience as well, it has been rough to get anything. I got shut out by Drew Barrymore yet again, Bill Murray, and more… Tonight Erica and I are heading out to Hollywood Blvd to the premiere of The Road at AFI fest. Erica really wants to get Aragorn himself Mr. Viggo Mortensen and I really want to get Ms. Charlize Theron. So, buckle up and get ready for a long evening out! 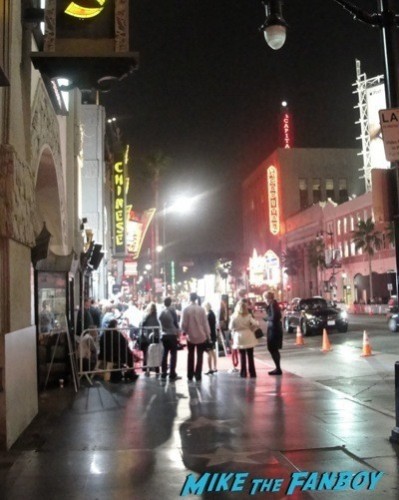 4:28 p.m. – There is literally no one here, it’s a tad shocking considering that the red carpet is supposed to start at 6:30 p.m. Anyway, Erica and I are going to take a walk.

4:29 p.m. – I was hoping to have brunch with Jesus, and Bart Simpson later on today, but I guess that will have to wait.

5:31 p.m. – It’s shocking but there are only maybe 15 people here. Usually for a premiere of this sort the barricades are filling up by now.

5:45 p.m. – The arrivals start at 6:30 ish and then there is another premiere right after for the new Nic Cage movie Bad Lieutenant. I know that’s strange but that’s what they are doing!

5:59 p.m. – I brought my Lord of the Rings trilogy mini poster, and a magazine for a friend as well. I also brought a DVD insert of Return of the King for another friend of mine. I think that every friend of mine loves Viggo! LOL… Chicks, what can you do?

6:10 p.m. – I just noticed someone made a sign for Viggo and hung it across the street. It says, “The Road lead us to Viggo.” Lol, it’s kind of small but hopefully effective. 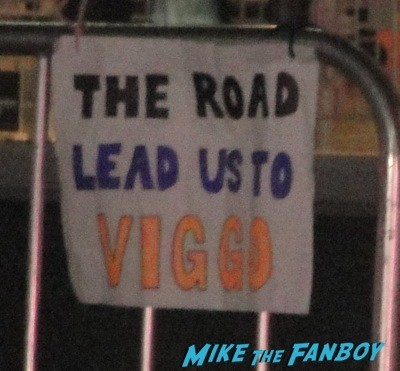 6:21 p.m. – Erica brought a Lord of the Rings book that she has a lot of people already on. I mean she has ¾ of the cast! Very impressive.

6:43 p.m. – It’s starting to fill up now, well at least behind us. There are a couple rows of people behind us now, across the street there isn’t anyone! Crazy times!

6:46 p.m. – People are starting to arrive, oh wait… that’s Charlize Theron! Everyone is going crazy for her. We are chanting and chanting… She is not even looking over at us! We are continuing to chant and chant and chant some more…

6:48 p.m. – Charlize is walking the carpet with her date and then runs back and walks the carpet by herself. Still she is refusing to look over here. Man that really sucks! I really wanted her… sigh…

6:51 p.m. – Wait, someone is signing across the street. Where did they come from? Holy crap it’s Viggo! He simply appeared, no one saw him arrive, and no one saw him cross. Crazy! He is signing up a storm, I ask Erica if she wants to run over there, but she says no and we stay here. 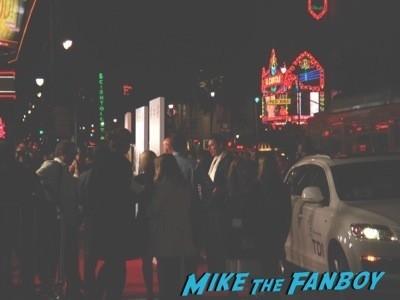 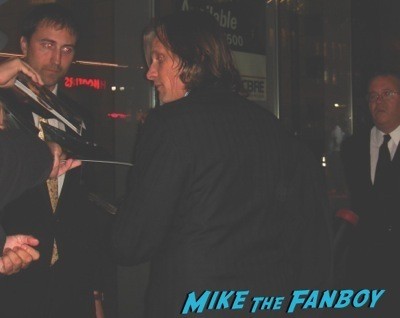 6:57 p.m. – Viggo is crossing back over and coming right over to us. Well, Erica is shouting her lungs off… you think she’s small but she is quite mighty and has impressive lung power when she wants too. 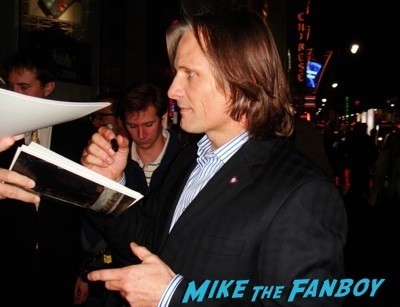 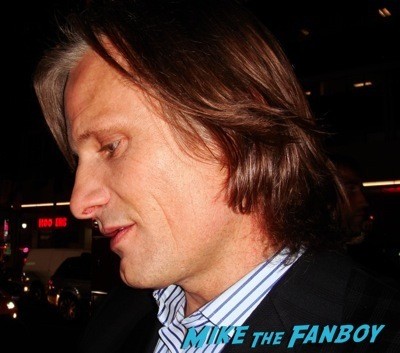 6:59 p.m. – Viggo is signing away. I have the mini poster and insert. Just got him on the magazine and I got him on the poster. I tried to get the insert signed as well but Viggo looked at me and said, “You got one already.” Harrumph, it’s not like the dealers didn’t get like seven each. Sigh… He is very nice though and quite, and I’m not sure if this is the right way to describe it, but serene is what comes to mind. 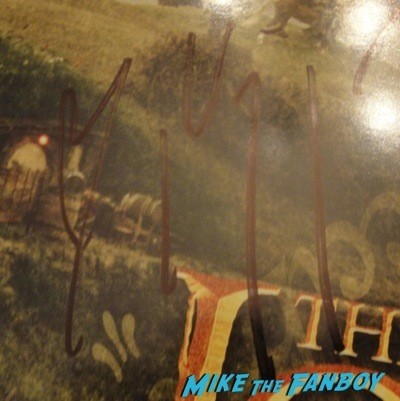 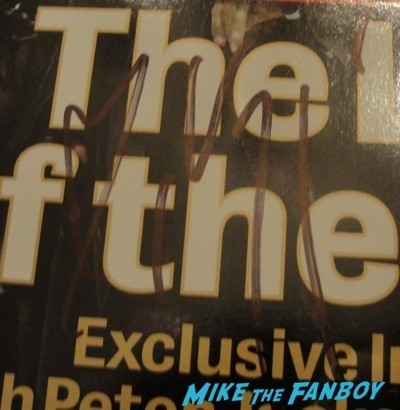 7:10 p.m. – They are just flipping the posters over on the carpet for each movie. That’s kind of lame I must say. 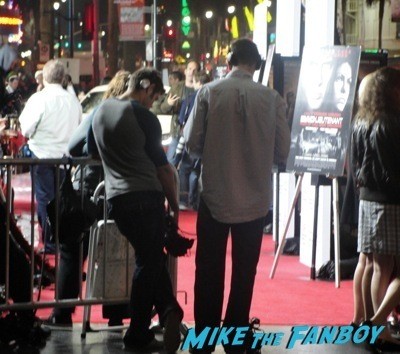 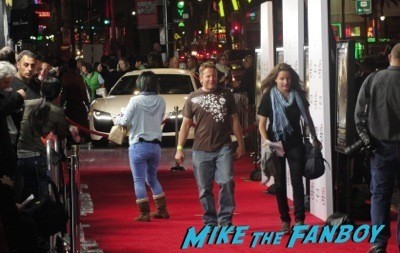 7:35 p.m. – Some people are arriving now; we were told Nicolas Cage is not going to show up. Sigh…

7:38 p.m. – There was some kind of party beforehand so everyone is coming back to back. Fairuza Balk just arrived… Oh and there’s Eva Mendez… No one is coming over. Sigh… to be fair people are not really yelling either. 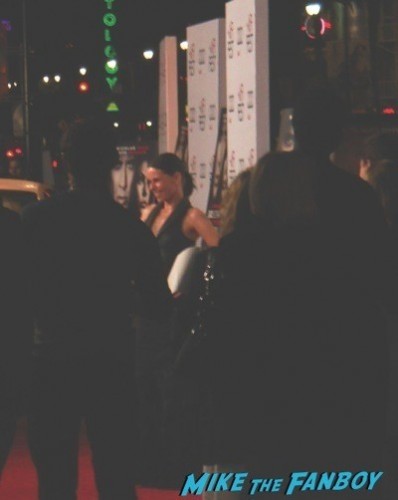 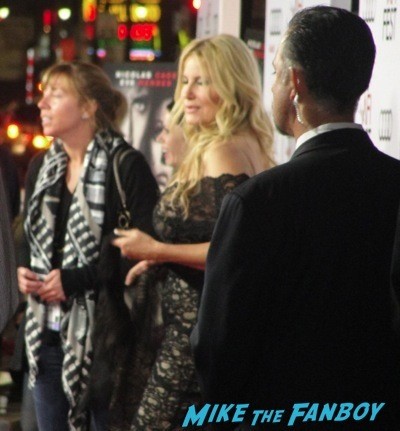 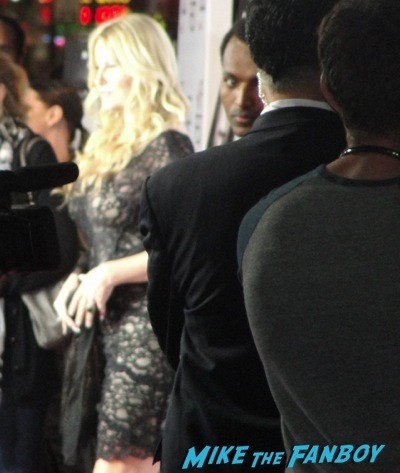 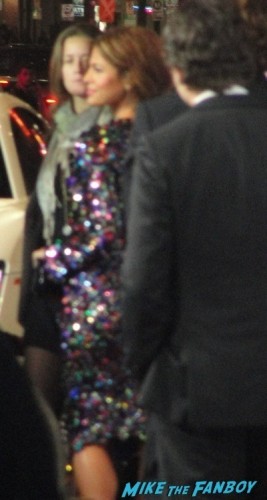 Nope, she’s not coming over either. Sigh… well, I’m getting disappointed, so it’s time to head home and get warm. Thankfully, Viggo came over. I’m very disappointed in Charlize I must say. Still, I’m happy with Viggo, a little upset the Erica got me to start a Lord of the Rings poster after I have avoided it for years… sigh… lol… 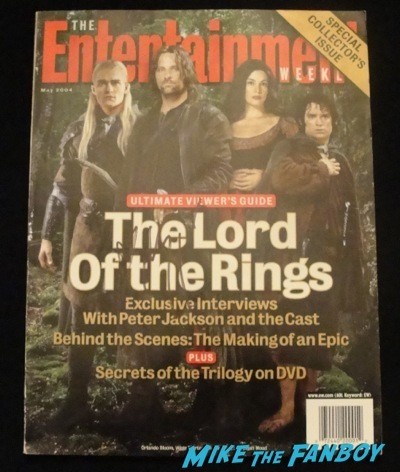 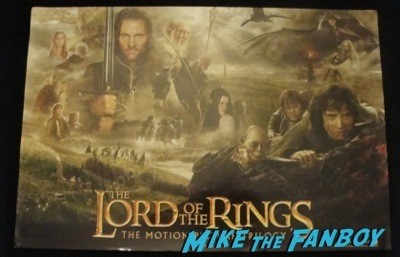