Home / Ace • Fanboying! • Stars of the 1980's and 1990's • Walk Of Fame / Olympia Dukakis Star Ceremony Report! Ace Is Disappointed After Meeting The Acting Legend! In Fact… She Hurt His Fanboy Heart! Doh! Autographs! And More!

This makes me so sad… Now, As you all know, I finished my Steel Magnolias cast piece, it’s amazing, framed in UV glass and is hanging in my bedroom.

I was able to get Ms. Dukakis on my piece and Scotty also got her to sign as well after one of her plays rather recently actually. I was going to head down to Olympia Dukakis’s star ceremony because I adore her, she’s amazing, Moonstruck, Steel Magnolias, Look Who’s Talking, Working Girl, Dad, down the line she’s been in some amazing films.

So, when Ace expressed his disappointment in meeting Olympia it made me sad as well. In fact, I was more than a bit disappointed.

What’s up autograph fanatics! Ace here with a recap of the Olympia Dukakis star ceremony!

Steel Magnolias is an absolute awesome film! If you haven’t seen it, place it on your bucket list as soon as you finish reading this article. I went for Olympia Dukakis due to this awesome movie. I was a complete fan of her as soon as I watched Moonstruck, and her role as Clairee in Steel Magnolias made me fall in love with her!

Sadly, meeting Olympia was not as cracked up as I thought it would be… We got there around an hour early to celebrate the star’s film career. There was no sight of her during the course of the hour, so we assumed they brought her through the back.

Ed Asner arrived around twenty minutes before the ceremony commenced. There were only three graphers at the time. Ed kindly signed JFK for me, although I regret not having or printing UP. Due to time constraints, it was not doable! 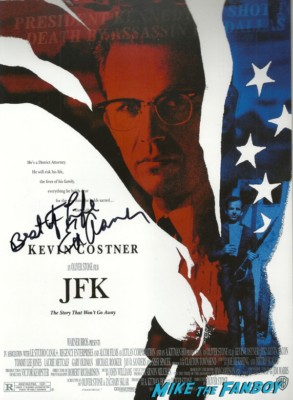 Diane Ladd arrived around five minutes before the ceremony started. As soon as they arrived, Olympia popped out of the back, and greeted the both of them as if they had not seen each other in years. She looked absolutely darling. She waved at everyone that zoned in on her. I was just happy to see her!

The ceremony commenced only a few minutes later. Ed Asner was an absolute joy and Diane Ladd also joined in on the fun. Dukakis ate it all up and was absolutely pleasant. The ceremony only lasted 25-30 minutes, and it was only a matter of time before Olympia was done. Everyone had left, and around this point in time, there were only 6-7 graphers there.

Olympia is standing right in front of us. The barricade is keeping us, three rows of chairs, and Olympia at a small distance. We were at most 7 feet away from her. It was more like the distance from where you are standing in a room, to the closest door or window. It was as though a cloud went over that pleasant demeanor, as soon as the cameras turned left; she did not want to sign. She said something to the effect, “Not today guys.” Maybe she wasn’t feeling good…but it was absolutely disappointing. She remained at the 5-7 feet in front of us for 20 minutes. I am standing there with my photos… It just seems so disappointing that we are this close… We even cleared the row of chairs….

A really nice man approached us, taking a few of our items… I believe it was her son… It would make total sense. He handed a few items to her. She looked at him, looked at the items, and looked at us, all in a disappointing manner. She did not want to pick up a pen. She sighed and seemed frustrated. When she began to sign, she did it in a rather frustrated manner… 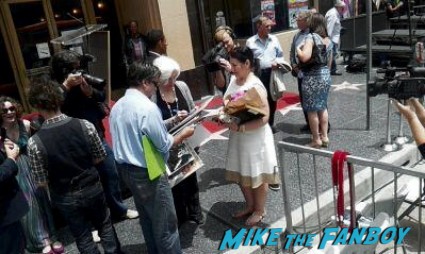 I was only praying that the autograph would come out all right… She was not happy to do it… I still couldn’t believe she was so close and she wouldn’t just take the 5 steps toward us…  Disappointing would be the word… not angry, just disappointing. She is amazing in her films, and you fall in love with the characters she portrays, so the child in me was disappointed. I watched Steel Magnolias as a kid with my Mom…so she was pretty disappointed.

Regardless, she signed a lot of items on her face… Seemed frustrated as she did it. Maybe, she didn’t like Steel Magnolias… Maybe, the working relationship was bad… Or, Maybe she wasn’t feeling well… Who knows? 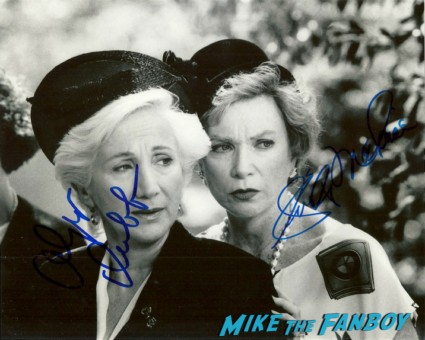 I know there are a lot of pleasant experiences out there. Mine just wasn’t one of them. Thank god for her possible son/publicist/manager… He made it possible… 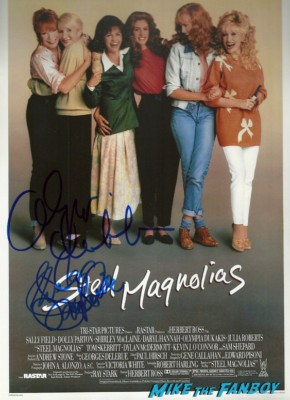 As Olympia walked out, fans begged her… It seemed as though it were a task… She would not take pictures with you if you asked. She did a recording snippet for someone to promote her future work… She signed a few with the comment “Might as well.” To add the cherry on top, someone handed her a faded sharpie… 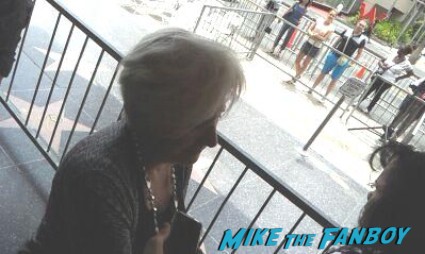 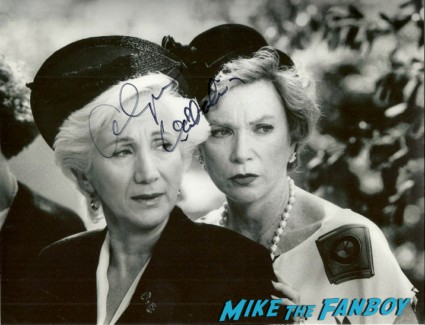 If she was a little bit nicer, it could have been a marvelous day meeting this Steel Magnolia… Unfortunately, I believe she earns a disappointing Theo… I was disappointed in meeting her, because I know she had the potential of being an absolute doll…

(Editor’s Note: I don’t have a disappointing Theo badge yet… Sorry… One might be coming though! M-) 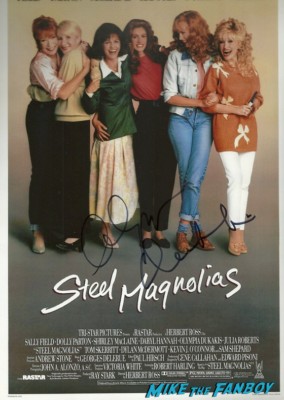