With last week’s episode, we’ve caught up with Claire’s story to last season. Does that sentence make sense? Time travel is fun!

It’s 1968 or roughly 20 years since Claire returned and some time since she discovered Jamie didn’t die at Culloden. Claire, Bree and Roger are searching prisoner lists since they know he was captured after the battle, but not much else. They’ve been digging for a while when Claire discovers “James Fraser” listed in the most pristine penmanship for Ardsmuir Prison. Huzzah! (Also, that prison cleric could make a fortune doing wedding invitations.)

They track Jamie until Ardsmuir went kaput. As a professional historian, Roger figures he was shipped off to the colonies (like Murtagh) so they check passenger manifests. Brilliant! 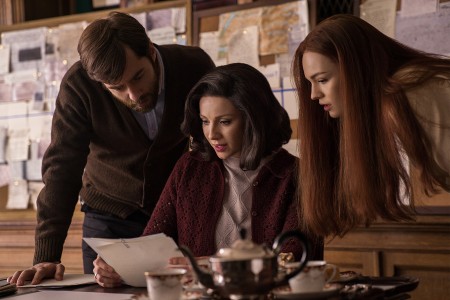 Except, the archives end about 100 years too early so this is now a dead end. True to form, Claire needs a drink. (We miss that Claire!) They head to a pub where the locals glare at Claire and Bree. Women aren’t supposed to be at the bar, but Claire’s a liberated woman so she’s not budging. That’s our girl!

Bree continues to be optimistic they’ll find Jamie, but confesses to Roger she feels horribly selfish. She’s finally getting along with Claire so part of her doesn’t want to find Jamie since she’ll lose her mother. Roger confesses he knows the feeling since, if Claire goes back, Bree will leave. Before he can explain that, she plants one on him. Bree, like her mother, is not particularly shy. They agree the kiss was unexpected, but before Roger can say much more, she bolts.

And then things really don’t progress further since Claire realizes she’s getting too caught up in the past (like Mrs. Graham warned) and it’s time to return to Boston.

So no Bree and Roger after all or Breeger or Rogee (do they have a ship name?) Sad times.

Jamie is now a groomsman at a fancy-schmancy English estate named Helwater. While the extensive stables and horses are marvelous, the Dunsany family is not. Lady Dunsany hates the Scots since her son died at Prestonpans and the eldest daughter, Geneva is a spoiled, conniving brat on wheels (or horses). Still, Lord Dunsany is decent since he knows about Jamie’s background and they agree he’ll go by the name Alexander McKenzie (which is sort of a nickname for James Alexander Malcolm MacKenzie Fraser) to avoid any association with Red Jamie. The man so many aliases this season! 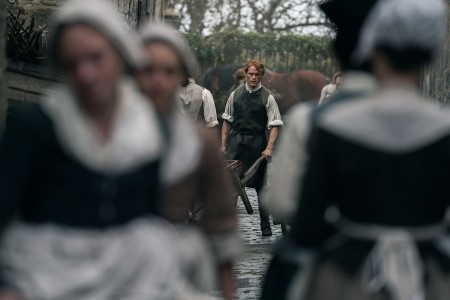 A year(ish) passes and Lord John Grey is making one of his quarterly well-being-but-I-secretly-still-love-you visits. The cover story is “Alexander MacKenzie” used to work for the Greys so, when John visits, he and Jamie play chess in the woods. No, that’s not a euphemism and the Dunsanys don’t think it’s odd.

During this visit, Lady Geneva, Lady Isobel (the youngest and kindest Dunsany) and Lord Melton take a turn around the woods and encounter the chess players. From the look on Lord Melton’s face, it’s clear that little bro John did not inform him of Jamie’s new status. DOH!

Lord Melton holds it together, but Lady Geneva takes notice and she’s got a plan. She’s about to be sold off, er, married, to the really wealthy Earl of Ellsmere. Ellsmere is rolling in the dough, but he’s also close to rolling to his grave and Lady Geneva does not want to (as Monica Gellar says) give Ellsmere “her flower.” 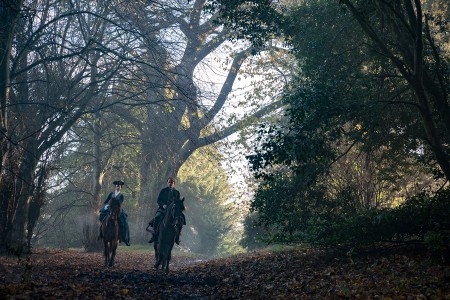 It turns out Lord Melton is super-talkative when he’s drunk (a great trait for a senior officer in the army) and he spills the beans on Jamie’s identity. Geneva corners Jamie and threatens to send him to jail and reign terror on Lallybroch unless he comes to her room that night. Not lady-like behavior on so many counts… 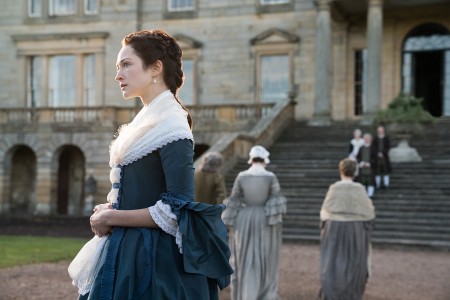 Since she really is a bitch, Jamie knows he has no choice and goes to her room and helps her out. Out of her clothes, her virtue and her illusion that she’s in love with him. He explains that she’s confusing lust with love. Buh-bye!

Time passes. How much? Less than 9 months since Geneva is now married and round with child. Jamie’s good with math so he knows what that means. There’s trouble with the birth so Dunsany family (and their groomsman) rush off to the Ellsmere estate where Geneva gives birth to a healthy boy and then suddenly dies afterward.

The house is in an uproar since Lord Ellsmere knows the baby isn’t his (they never knew each other that well). The Dunsanys offer to take the baby away, but Ellsmere starts to stab the boy. Jamie shoots Ellsmere dead. He’s lost two babies already, he ain’t losing another.

The Dunsanys grab the baby who is the new Lord Ellsmere. (Lord and Lady Dunsany know he’s a bastard, but only Isobel and Jamie secretly know who the father is.) Since the Dunsanys are influential, it’s not a surprise that the courts believe Ellsmere killed himself with grief over Geneva’s passing (um, clearly the courts didn’t know her) so Jamie is free of charges. Also, Lady Dunsany offers to free Jamie. They can wipe his slate clean and he can go back to Lallybroch as a free man. He considers it, but he can’t leave his (secret) son.

Years pass and the boy, William aka Willie, grows up to become very fond of Mac the groomsman (the “Kensie” is now silent). Willie has his daddy’s horse skills. People start to remark on how often they’re together and how Willie even sort of resembles the Scotsman. Uh oh. Jamie knows he needs to leave before others figure out the truth. Just when we thought the constant heartbreak was over!

Willie isn’t taking it well either. He wants to be like Jamie so Jamie secretly and unofficially baptizes him William James and gives him a wooden snake he’s carved — just like the snake Jamie’s brother (also named Willie) gave him. 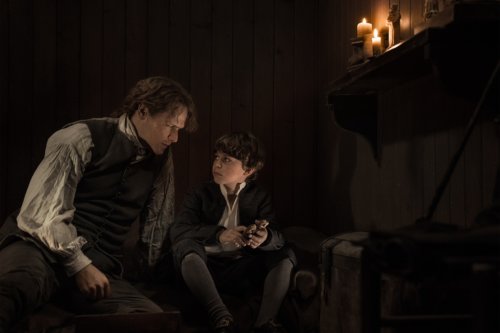 On John Grey’s last visit with Jamie, he agrees the resemblance is starting to become obvious. Jamie asks John to watch over his son and in exchange Jamie will agree to, well, give John his fondest desire. John’s a little taken aback/amused and ultimately refuses the offer, as much as he wants it. Clearly Jamie would be doing it as a duty and John values their friendship too much.

Besides, John has a plan: he’s left the army (he’s out of uniform!) and will marry Lady Isobel who is a real peach and has had a crush on John forever. John’s not into women, but he’s fond of Isobel and he can be Willie’s official daddy. Win/win/win for all!

Except Jamie still has to leave his son. He leaves Helwater to head back to Lallybroch once more.

Erica: Poor Jamie! Women only have sex with him when their crying their eyes out or when they’re blackmailing him! I’m sure he’s missing Claire something fierce.

Alicia: Seriously! But even they first had to sleep together to solidify the marriage to protect Claire and not because she was wanting to jump his bones from the get go.

Erica: I have to say, I didn’t love Sophie as Bree last season and I’m still not feeling her yet. Bree is a headstrong character and she starts off not having a great relationship with Claire so Sophie needs to find a way to ground her and get people to empathize with Bree. 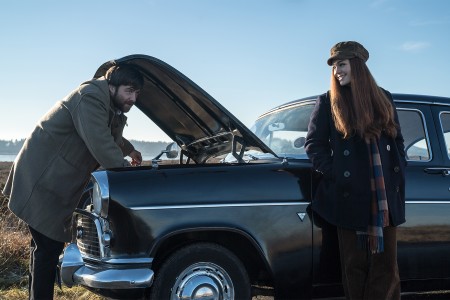 Alicia: Yeah. I feel Bree is a little too timid in the show.

Erica: Richard is doing his best to make Bree interesting since Roger is so puppy-dog around her, but I don’t like her yet. Maybe Sophie is a little hampered by playing her idea of a headstrong American, but I hope she turns the corner soon.

Alicia: I know it’s not a long section of the book, but I kind of wish we’d had more Jamie/Willie time. Then again, this was sad enough so if we’d had – say an entire episode – of those two bonding that would’ve been gut wrenching.

Erica: I guess they finally decided John will have brown hair. I don’t mind the change (it’s not like Claire’s hair is a 100 shades of brown), but I’m glad they picked a color.

Alicia: Geez, I know. He may not be spot on physically, but neither is Sam as Jamie, so I’m cool with the brown so long as he plays the character right and so far I still think Dave Berry is doing a good job.

Erica: More nit picky thoughts: The scarring on Jamie’s back is healing and his hand is completely normal. I supposed there’s enough aging they’ll need to do that they need to focus a bit.

Alicia: But still. Some of these are important later on. I mean it’s been a while since I’ve read some of these, but I feel his hand especially gives him trouble from time to time – like with the print shop, the smuggling, work on Fraser’s Ridge…I can live w/out the crooked nose but the scars on his back and the hand are kind of a big deal.

Erica: Helwater was never one of my favorite parts of Voyager so I’m glad we can move on to Jamie forging ahead and the scene we’re all dying for!

Alicia: LOL. True. So many things I’m looking forward to: The print shop (obviously), the battle of wills between Claire and Jenny at Lallybroch, the search for Young Ian…so much! I could live w/out all the Laoghaire stuff, though *wink*

Erica: Well, it’s on its way whether we like it or not! I’m curious to see how less shew-ish she’ll be in the show.

Next week’s episode is going to be a doozy so make sure you have a box of tissues on hand! Here’s the official description of “Freedom and Whiskey”:

As Brianna grapples with the life-changing revelations of the past summer, Claire must help her come to terms with the fact that she is truly her father’s daughter – her 18th century Highlander father. To complicate matters further, Roger brings news that forces Claire and Brianna to face an impossible choice.