Home / Outlander • The Lovely Erica • The Novel Strumpet • TV Heartbeat • Written Revelry / Outlander Recap and Reflection! The Porpoise, The Artemis and The Bruja, can you spot the Fraser?

So Claire’s been doc-napped by baby British Captain, Jamie’s onboard another ship, Young Ian is who knows where…it’s exciting and new! Come aboard! We’re expecting you! 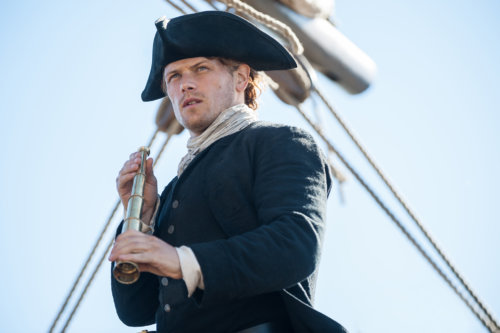 We go back in time a few minutes to watch Jamie watch the Porpoise suddenly take off with Claire. He is a tad unhappy about this. Like, “let’s mutiny” kind of unhappy. He’s outnumbered and now a nuisance to paranoid Captain Raines who throws Jamie into the brig. Not an uncommon place for him to wind up lately. 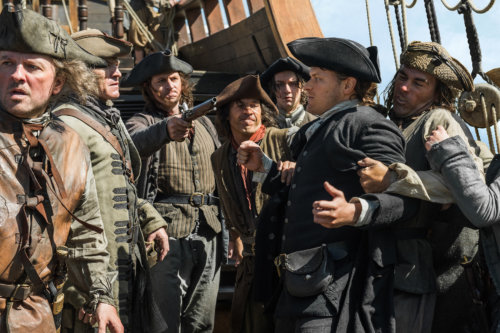 Fergus comes to visit a retching Jamie who’s no longer getting Mr. Willoughby’s anti-seasickness acupuncture treatment. Jamie knows that Claire is immune to the typhoid, but he’s worried about her alone on a ship with 300 men. He asks Fergus to steal the keys to his cell so they can take over the ship. If Fergus can help Jamie mutiny, then Jamie will give his blessing on the marriage to Marsali. To sum up, Fergus must commit mutiny to win the hand of his fair maiden.

Fergus discusses this with Marsali who makes a good point that if they fail, she’ll be at the mercy of the crew. Ironically this is Jamie’s fear for Claire, but he’s totally blank on this happening to his stepdaughter. Fergus overhears members of the crew also talking lewdly about Marsali so he knows she’s right. He decides not help Jamie, even if that means he cannot marry Marsali. Jamie is not impressed.

A few days later, Captain Raines decides to free Jamie if he vows not to run since they need all hands on deck. Marsali convinced Captain Cranky that Jamie wouldn’t try to do anything untoward and she tells Jamie not to do anything since it may endanger Fergus. Jamie realizes they really love each other and relents, soon as they are in Jamaica and find Claire he’ll allow them to marry.

Things are looking up, right? Right?

Meanwhile… (about 50 miles away)

A bunch of baby British sailers have doc-napped Claire to help with a typhoid outbreak. She’s not happy, but that pesky Hippocratic Oath keeps her from trying to escape – at least that’s what we’re going with.

First thing’s first and that’s to stop the infection. She makes the Porpoise’s crew disinfect the entire ship and since resources are limited, that means dipping their hands into grog for a rudimentary alcohol gel. After Claire’s assistant, the pubescent Mr. Pound, sees that she’s serious about it, he rustles up some ex-distillers and gets them to purify the grog into pure alcohol. Yeah! Of course the men aren’t happy with the reduction in drink. Not the best way to win over a new crew… 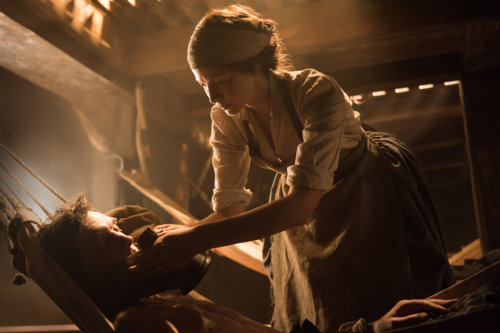 The Porpoise’s crew is also really superstitious about women on board, but luckily Mr. Pound is good at keeping his crew in line and enforcing Claire’s orders. He’s an adorably earnest 14 years old and cheers her on and gives her his lucky rabbit’s foot. Can we pinch his cheeks? 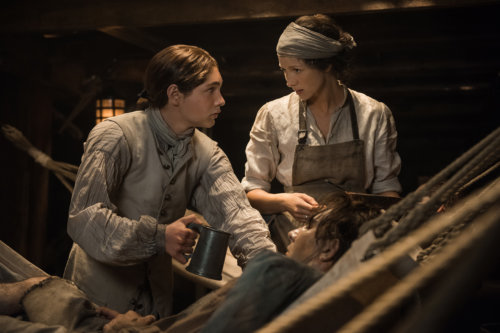 She’s still getting new cases so she meets with Captain Leonard and they go through the captain’s logs to figure out who is patient zero. She discovers the ‘Typhoid Mary’ is an immune carrier who’s prepping all the food. That’s the worst place for him so they lock him up to make sure he keeps away from everyone. The cook’s not happy since that was his only sous chef. Not the person to make unhappy since you never know what they’ll do to your food, right? 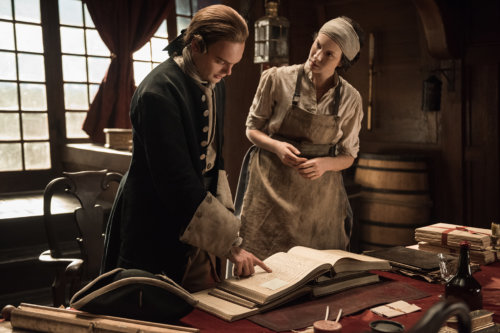 With one crisis is down, Claire stumbles into another. She finds out the Porpoise bumped in a Portuguese ship, but doesn’t know if it’s the Bruja which nabbed Young Ian. It’s so hard to keep track of which ship kidnapped which person these days!

Claire heads to the captain’s cabin to ask him, but it’s empty. Fine by her! She rifles through the captain’s logs and discovers they didn’t run into the Bruja. She also discovers that a crew member named Harry Tompkins recognized Jamie as a seditious murderer so the captain is planning on arresting Jamie when he comes for Claire in Jamaica. Doh!

Claire vaguely asks about Harry Tompkins and Mr. Pound obliges by wrestling up the dude. (Mr. Pound is the most capable 14 year old ever!) Harry Tompkins is the one-eyed henchman who tussled with Young Ian during the print shop fire! So that’s where the sedition charge comes from. And the murder charge? Yeah, Tompkins explains they found a body in a cask of Creme de Menthe so that evil deed is actually on Claire, but credited to Jamie. Regardless…whoops!

Claire considers threatening or harming Tompkins since he’s the only witness. But Tompkins is rather pathetic since he whines that he thought he’d get a promotion for outing Alexander Malcolm’s crimes yet – instead of being rewarded – he found himself conscripted to the doomed Porpoise. We say sweet karmic justice!

Claire can’t harm him so she proclaims Tompkins is another source of infection so he’s tucked away in jail. Bwah ha ha! Oh the power! Now she just has to figure out how to warn Jamie.

Soon, the typhoid cases start to dwindle so most of the crew are starting to rally. But then, Claire notices that Mr. Pound is covered in red spots. He was scrambling around so much, he infected himself. Claire missed the symptoms in her pre-occupation with Tompkins. She returns his rabbit’s foot to him and watches over his burial at sea and throws in the last stitch in his shroud. 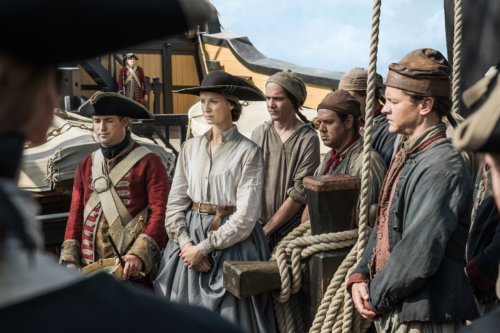 Claire’s got only one friend left and she’s the only other woman on board, Mrs. Annekje Johansen the goat herder. (Are two goats a herd?) The goat milk is sustaining the dozens of sick men and may provide Claire a chance to escape. Maybe. The Porpoise has a supply stop to grab fresh water and it’s a chance for Annekje to take the goats ashore to snack on some grass. Claire can go ashore with them and then make a break for it.

The plan goes beautifully and they are on shore, high on the hill there’s a lonely goatherd since Claire sprints off. She’s is in the clear….and runs into Captain Leonard and a pair of marines. Drat! Captain Baby Face apologizes and owns up to the fact that he wants to use her as bait to capture Jamie. It doesn’t matter that she saved his ship because he has a duty (and a fierce ambition). Blah!

So it’s back to the ship, but Annekje is not giving up just yet. That night, she grabs Claire and tells her to jump ship. What? They aren’t too far out from that supply island and the current should help her swim ashore. Annekje gestures to some empty barrels that can be used as a raft and gives Claire some money as well. After some hesitation, (who wouldn’t when faced with jumping several stories into the ocean at night), Claire flings herself from the ship…

Erica: Willoughby isn’t allowed to treat Jamie, but they didn’t search him well enough to find the photos of Bree. Excellent jailers, these sailors.

Alicia: LOL…too true! Of course, maybe keeping Willoughby away was the plan, if Jamie’s too busy heaving his innards then he won’t have time or be strong enough to mutiny.

Erica: It’s nice that we finally get a moment when Marsali isn’t shrieking at anyone. We need to see more of this side of her!

Alicia: Yeah, I get the sense Marsali is more strong-willed than her mother. Laoghaire is pretty weak willed, but I get the sense that Marsali – even if she can be a bit shrewish – has a backbone and is smart.

Erica: I’m not sure I buy into that moment where Claire takes out a saw to menace Tompkins. She may be faking her will to chop off his head to threaten him, but that oath she keeps mentioning also says something about “do no harm.”

Alicia: I buy that in that moment she’s trying a scare tactic, but since Tompkins is apathetic to death she really doesn’t have much of a threat since she’d never actually do it. I mean she tried to save the man who wanted to rape her, so… I think it’s taking the ‘do no harm’ oath a bit far at times, though.

Erica: It does tend to get her into trouble. (See recent kidnapping)

Erica: He’s like a helpful puppy and such a breath of fresh air after all the misogynist sailors. He’s also a lot cleaner.

Alicia: I wish we’d gotten to see more of an interaction with Claire and Mrs. Johansen to establish their friendship, but I do love that woman. Sure, just jump off the side of a massive boat. No big.

Erica: I wonder why they made Elias Pound so young. I know officers could be really young back then, but 14 years old is tough.

Alicia: I know she asks the captain his age and he’s 19, can’t remember if they give Pound’s. Also, don’t know if I like the way they make the Captain and the Cook semi-villains. In the book, the Cook is reasonable and the Captain actually feels bad he ever wrote anything down about Jamie. I guess they needed the antagonist, but still.

Erica: It seems like every sailor is completely unenlightened. You’d think they’d be grateful for any help when faced with an epidemic. It’s also hard to believe the captain wouldn’t reassign someone to help the cook. The biggest change was actually a small scene — no Lord John Grey on the Porpoise! I wonder if we will see him for the rest of this season then.

Alicia:AAAAAHHHHHHH!!!! Why on earth would they drop that? Ok, so it’s like half a page in the book, but it’s such a “OMGOMGOMGOMGOMGOMGOMGOMG she just met John Grey! He just met Claire. They have no idea!” moment. I mean I reread that bit a few times when I first read it because it made my insides so giddy. They all run into each other in Jamaica, so they should keep that. They better…*giving narrowed eyes to the writers*

Erica: I certainly hope we see him.

Alicia: While this has covered a lot of ground, there are only a handful of episodes left and still around 300 pages to cover. It will be interesting to see how they pull it off.

Here’s what’s up for next week’s episode titled “Uncharted”:

After making a leap of faith, Claire washes up on a seemingly deserted island where survival is her only option. Navigating treacherous waters has crippled the Artemis, so Jamie devises a joyful moment for his crew in the midst of devastating setbacks.