“What country, friends, is this?” Well, it’s not Ilyria, but at least we can say Claire’s worst pleasure cruise is now over!

Claire survived jumping off the ship and washes ashore on an unknown island. It’s big and green and there’s not a soul in sight. All she has is the Batsuit so she needs to find food and water within three days or she’s toast.

Unfortunately she can’t find anything but ants, serpents and lots of sun. The Batsuit looses a few items as she tears the stuffing out of the bum roll for kindling and the Batskirt is sacrificed after an ant infestation. Well, she definitely got full use out of that one… 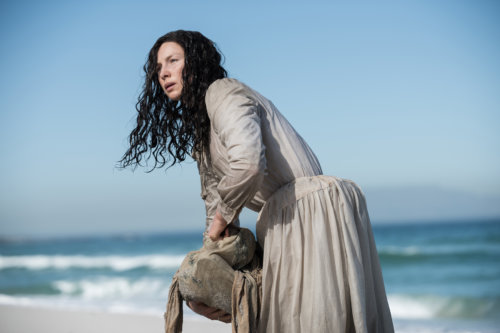 Luckily she stumbles into Father Fogden, his mother-in-law Mamacita…and Coco. Father Fogden may have spent a little too much time in the sun without a hat since he consults a coconut named Coco on whether or not he should help Claire depart promptly for Jamaica. Since she’s arrived, his beloved goats are flourishing so he doesn’t want to let her go. 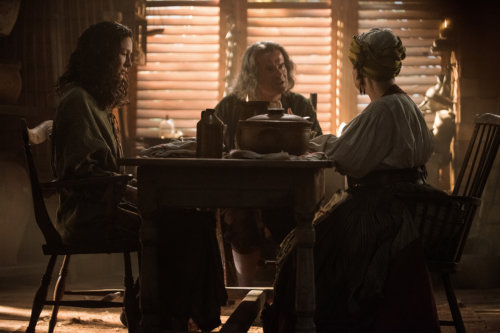 He’s ratchets up his creepy factor when Mamacita brings back the head of his beloved goat Arabella. The goat’s been slaughtered by a passing sailor, but Mamacita rescued the dead head so Father Fogden can dump some insects who will pick off the flesh and leave the skull. Charming.

The insects are from the Abandonwe cave and they devour all flesh. Claire briefly flashes back to that weird prophecy from the Campbell’s back in Edinburgh. Remember that? Margaret said something about being devoured by the Abandonwe. Is this what she meant? Gross.

Claire learns that Arabella was slaughtered for meat by a Chinamen from a passing ship which means Jamie and the Artemis may be nearby! She takes off running for the shore.

Jamie is on the island with the remaining crew of the Artemis. They braved a storm where the ship was severely damaged and they lost Captain Raines and several crew members. They pulled over to the nearest island to make repairs and, lucky for Claire, it’s the same island (though they don’t know it yet). Jamie and the helmsman are basically co-captaining the ship and they plan on leaving that night for Jamaica where Jamie’s eager to reunite with Claire.

Claire makes it to shore and sees the ship is still at anchor. She flashes a hand mirror (that she stole from Father Fogden) and it captures Jamie’s attention. With the spyglass, he sees its Claire on shore!

They reunite on the beach and Mr, Willoughby patches up Claire’s injuries. She and Jamie catch up. She tells him he’s a wanted man in Jamaica, but they still need to go to find Young Ian. He tells her that he’s given his blessing to Fergus and Marsali. After the tragedy to the crew, they need some happy news like a wedding. Claire happens to know a (wacky/creepy) priest on the island.

Willoughby apologizes to Father Fogden for slaughtering Arabella (the goat) and offers up a chicken. Marsali admits Claire isn’t the devil when she offers to tell her how contraceptives work. Fair trades all around, we reckon. 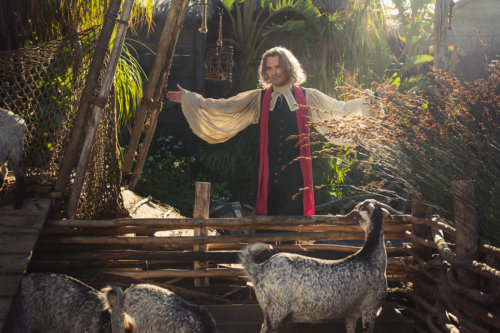 Father Fogden is a little surprised that Marsali wants to marry Fergus who is missing a hand, but he refuses to marry them when Fergus doesn’t have a last name. Jamie pipes up and says his full name is Fergus Claudel Fraser. (Claudel is his original French name.) Yeah! Fergus got a bride and a last name in one night! 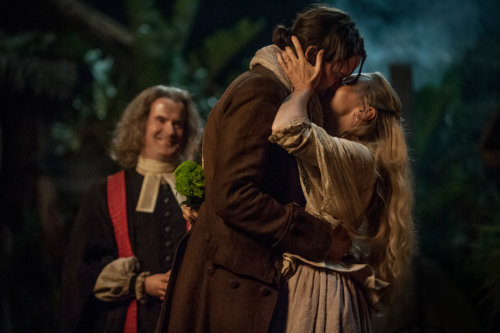 Speaking of night, Jamie and Claire now have something they haven’t had in months – a bed all to themselves since they moved into the captain’s cabin. Claire’s wounds are a wee bit infected so, reunited with her syringe and penicillin, she doses herself. (Jamie is too chicken to stab her with the needle.)

So reunited with Jamie and a little punchy courtesy of Mr. Willoughby’s turtle soup, the two happily christen the new cabin.

Erica: Thank God this episode had a happy ending! It’s been unhappy for so long we needed some smiles again.

Alicia: That’s for sure. This episode was like the lull before a storm. It was pretty quiet, but I agree that the ending was just what we’ve needed after these last few episodes.

Erica: Lauren Lyle definitely has Marsali’s tough strength down. I’m starting to like Marsali more now that we get to see more sides of her.

Alicia: While I enjoyed watching Claire being resourceful (girl power) I always wonder why people venture so far into the forest vs. following the shore line around if you’re looking for civilization on an island. Just saying. 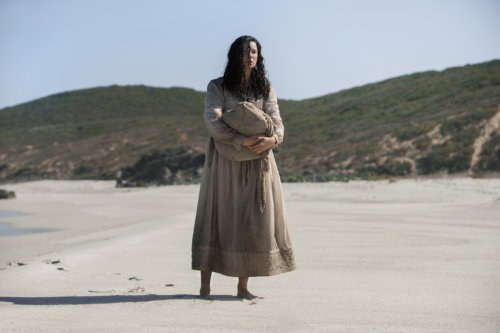 Erica: I wondered why she couldn’t find something edible among all the foliage. However, I’ve never been stranded on a random island so…

Alicia: I love how Jamie couldn’t give her the shot. I get it. But then again I’m a wuss and pretty much black out anytime I see a needle, so…

Erica: Yes, I just loved that scene since its Claire and Jamie teasing each other and having light-hearted fun for the first time in 20 years. We need more of this!

Alicia: I’m ok with them cutting out the flood, the naturalist, Jamie’s going aboard the Porpoise and then somehow becoming entangled with a French crew and with the beard going bye-bye (didn’t go so well last time aye?). However, I also feel they cut out any real moments of tension this episode. Kind of a snooze for me.

Erica: It’s a big coincidence that they landed on the same island so the rest of it stretches things even more. It’s too much coincidence for one hour of TV.

Alicia: It’ll be interesting to see how these last episodes shape up, I guess this lull was nice since they’re really going to have to pick up the pace and I feel it’ll just be one big thing after another.

Erica: They can fit it if they focus on very specific beats which may mean no Lord John. It seems ripe for the writers to tweak something before the season ends.

There are just two episodes left! Here’s what’s up for next week’s episode titled “The Bakra”:

The Artemis finally reaches Jamaica bringing Jamie and Claire that much closer to their goal. During a lavish ball on the island, the Frasers encounter old allies, as well as former adversaries who threaten to derail their mission.