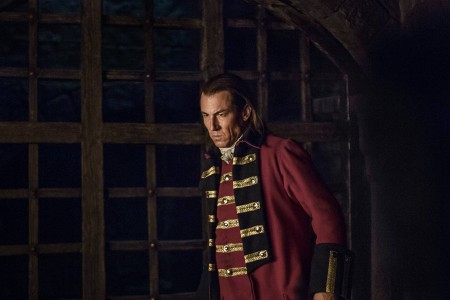 So to open a show with a hanging is pretty dramatic. To open it with multiple hangings while our hero contemplates his own demise is beyond. Then to have him watch as the man he was caught with not die instantly, but dangle there slowly choking…weel, it’s nae a good time for our Jamie, ken? 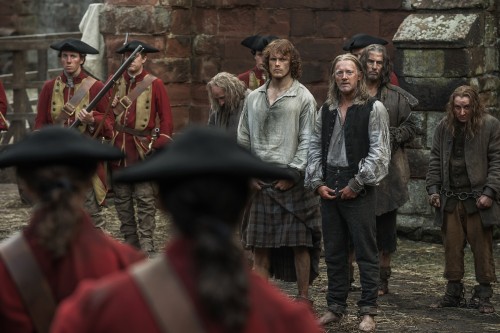 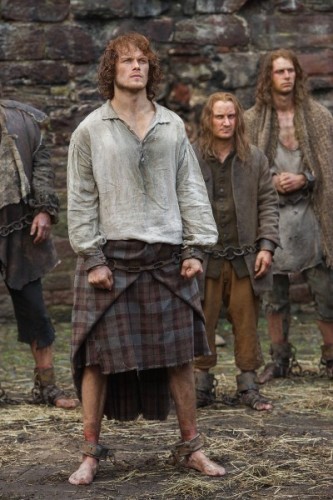 Of course the hanging may have been a blessing compared to what comes riding into the prison yard demanding a stay of execution for James Fraser. The “savior” is none other than Black Jack Randall. Jamie doesn’t look too thrilled with his pardon. He’s taken down from the scaffold and thrown into the dungeons to wait. 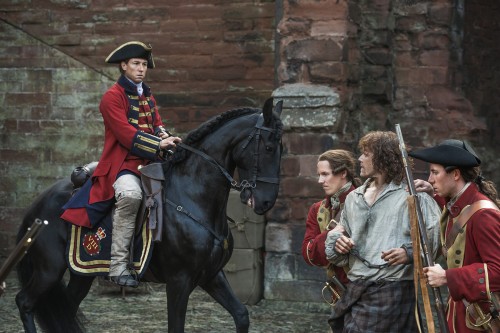 Meanwhile Claire has gone to the prison posing as a proper English lady who merely wants to see the prisoner, James Fraser, so she may do him a Christian kindness and carry any last words to his family. The Warden, Sir Fletcher, while sympathetic to a good Christian woman’s kind heart, thinks it’s not proper for the condemned to be allowed to write a letter – even if his execution has been put on hold. He gives Claire the condemned’s effects to take to his family. Claire, barely keeping it in, thanks him and leaves the prison only to lose her composure once outside the walls. Murtagh has to carry her off. 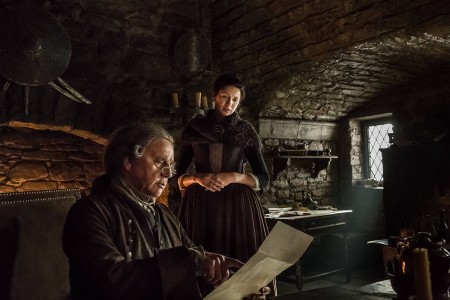 Back at the inn, Angus and Rupert, are boozing it up at a game of cards with the locals while Murtagh, Claire and Willie look on in disgust. 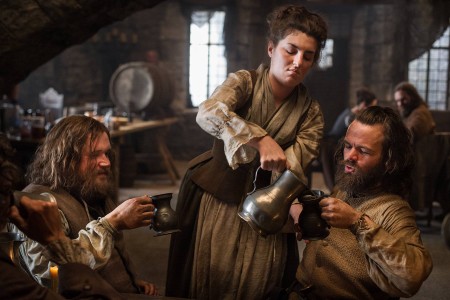 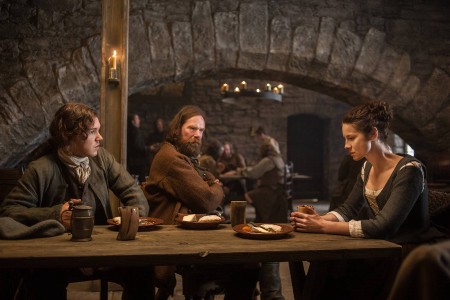 However, when Angus and Rupert rejoin the gang they share some valuable intel gleaned from the drunk locals who just happen to be Wentworth Prison guards. Ahhhhhhh! They now know the warden’s schedule every evening – dinner then prayer. So, there’s about an hour’s time that he is unavailable. Perfect.

Jamie, in the meantime, has been fruitlessly trying to break his chains so he can attempt escape. Randall finally shows up along with a big hulking assistant, Marley. Jamie soon realizes the hopelessness of his situation when Randall shows him the letter Sandringham was supposed to take to the Court of Sessions. Seems Sandringham has a big mouth when he’s in his cups and Randall got wind of the charges that were to be brought against him. Of course, he burns the letter in front of Jamie. This will not be the meanest thing Randall does today. 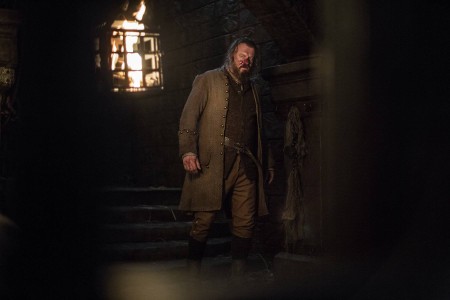 Meanwhile, Claire and Murtagh return to the prison, just when Sir Fletcher is eating and praying. Convenient, no? The guard leaves them in the office and they waste no time searching the room for anything to help locate Jamie and rescue him.

Down in the bowels of the prison, Randall declares that while he cannot save Jamie from death, he can give him a choice of how he dies. Randall wants to hear that the memory of Jamie’s lashings haunt him and that Jamie has thought of Randall since Fort William. And he wants to see Jamie’s scars – evidence of his handiwork. Jamie can either yield to him and admit his fear, for which Randall will give Jamie an easy death of his choice, or Jamie can refuse and hang in the morning. Randall is such a swell guy. 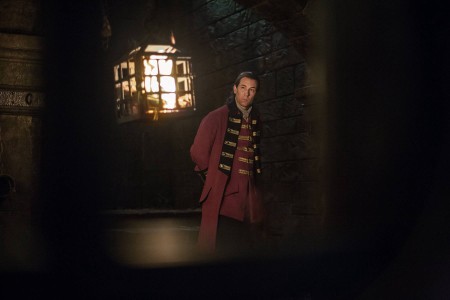 Back upstairs, Claire has found nothing and time is running out. The guard comes back in and catches her frantically searching Sir Fletcher’s papers. Doh! Murtagh knocks him out and Claire takes his keys and is off to search the prison. She finds other condemned prisoners and finally one tells her roughly where Jamie is being kept.

Jamie refuses Randall’s request to surrender but he does agree to let Randall see his back. When Randall moves in to pull his shirt up, Jamie strikes. Knocking Randall out, he and Marley have a fight which ends with Marley nearly choking Jamie to death. Randall stops Marley from killing Jamie, but drags Jamie over to a table where he takes Marley’s mallet and smashes Jamie’s hand, breaking and mutilating it.

Claire hears Jamie’s cries and heads toward them.

Randall, being the sadistic bastard that he is, asks Jamie why he forces him to hurt him. He waits for Jamie to become fully conscious again before forcing him to feel his…excitement…telling Jamie he wants to take him right then. Jamie, of course, threatens to kill him. Randall decides he’d like to wait until he’s calmer – so he leaves with Marley, telling Jamie that if he stops resisting it would all go easier. Yeah right.

Claire finds a door that leads out of the prison. She pulls the locking mechanism apart leaving a way to get out – or back in- and then finds Jamie. She tries to unlock his chains, but Jamie urges her to leave since Randall is coming back. Claire is determined to smash open Jamie’s manacles when Randall returns. With a sneer, Randall claims Claire has the worst timing. Um, sincerely think it’s the other way. 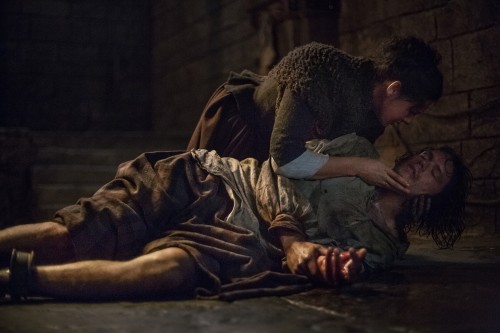 She tries to attack Randall, but Marley subdues her quickly. She regrets not killing him at Fort William, which Randall agrees was a mistake on their part and one they will regret. Some soldiers rush in claiming they need to take Claire since it’s believed she was going to help rescue a prisoner. Randall points out that she obviously failed and that she is a traitor to the crown and dismisses them. Well, there goes that chance…

He has Marley search her for weapons, who is quite enjoying the task. Randall intimates that Marley would probably enjoy some alone time with Claire. (Eeewwwwww!) Claire asks Randall if he’d like to watch – sarcastically – but Randall has another target in mind. Randall walks toward Jamie and Claire manages to knock Marley off her. In an unexpected burst of energy, Jamie smashes Marley’s throat as payment for pawing Claire. Randall gets a hold of Claire and chokes her, making sure Jamie is watching, while he prepares to smash her with the mallet. Jamie calls halt and states he will willingly give in to Randall if he lets Claire go.
Randall asks for a small token of trust. He has Jamie place his injured hand on the table and then Randall drives a nail through the middle of his ruined hand. 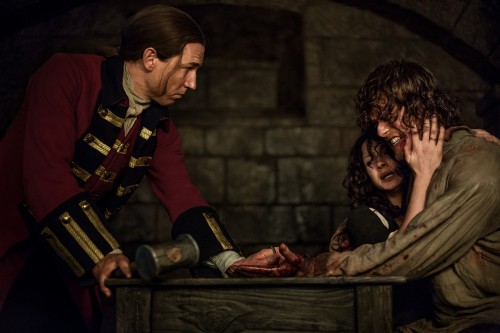 He then forces Jamie to kiss him. Satisfied that Jamie will keep his word, Randall is prepared to free Claire. A rather hysterical Claire who gets a brief goodbye before Randall drags her out. Randall says he heard that Claire had been tried as a witch. She agrees that she is a witch and curses Randall by telling him the day he will die, right before he pushes her out a trap door. 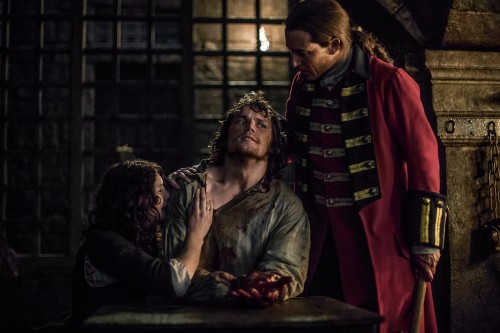 Claire falls down into a pit filled with the recently hanged bodies. She climbs over the bodies to freedom outside the prison.

Back in the cell, Randall undoes Jamie’s chains and assures him Claire is gone. He then pulls out a knife and cuts Jamie’s shirt open to see his back, which he lovingly caresses and declares a masterpiece. He asks Jamie what it’s like to be alive and wear so much dead flesh. Then he asks if they should begin…

Claire is running in the forest, listening to the sound of wolves, and meets Angus. They go to a sympathizer’s house, Sir MacRannoch. While he agrees to shelter them, he cannot help them. Claire tries to buy his help with her wedding-gift pearls. MacRannoch recognizes them since he gave them to Ellen McKenzie (seems she had many admirers). Murtagh assures the man that the Fraser they want to rescue is her son. Before they can secure MacRannoch’s help, he goes out to yell at a boy that lost some head of cattle.

Which gives Murtagh an idea…… 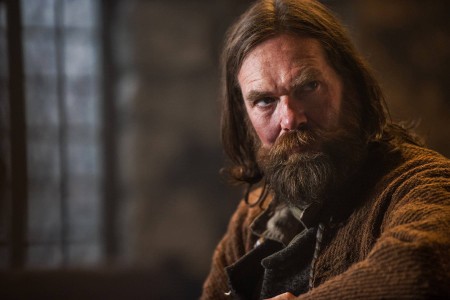 Alicia: Geez that was brutal. Well-played by everyone.

Erica: The opening hanging sequence was a brilliant opening — perfectly set the tone and the dread of what’s to come.

Alicia: Tobias really is good at making Randall such a sadistic bastard. So brutal and reasonable, it’s terrifying.

Alicia: Sam did a great job playing the defiance, the pain, the despair…just well done. That tear in the last scene between him and Randall…ugh my heart. Caitriona’s reactions in that last scene with Jamie and Randall were also heart breaking. Well done everyone!

Alicia: How fun to have the actor that gave Diana Gabaldon the idea for Jamie Fraser in the show? Such great fun, although I was hoping they’d find a way to put them in a scene together. For those who don’t know to what I’m referring…Check out the first FAQ answer on Diana Gabaldon’s site! 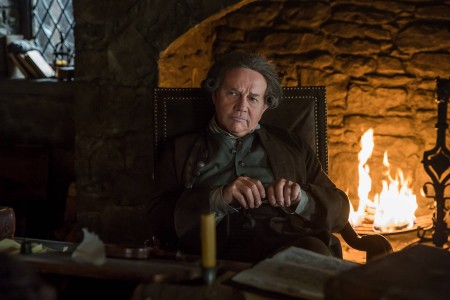 Erica: I love it when a show honors its origins — amazing to have in in the show.

Alicia: I can’t really say much more…still trying to take it all in. The last episode is going to really be exhausting if it keeps this pace.

Erica: I knew this was going to be a strong episode and Ron promised that would do it “straight up” and he did at as promised. Brutal – the way it’s supposed to be.

Alicia: I really wanted to see Claire fight the wolf and be rescued by the giant “bear” man. But mostly fight the wolf so I’m a little disappointed there….

Erica: Yes. At the same time, I did think that the poor woman had been through enough in one day.

Alicia: I feel they did so much, but covered very little ground in comparison to what is left in the book. I’m very interested to see how this season will end…

Erica: There’s a huge catharsis we sort of need to heal the wounds and make peace with what happened in tonight’s episode. I wonder how much more they will flashback to since this was already rough.

Alicia: They very much kept the brutality and violence intact…made it very had to watch in some instances.

Erica: The hardest scenes are yet to come…boy that catharsis better be strong enough to make emotional peace for the 10 months or so we’ll have to wait until season 2 begins!

You’ve read what we think, but how did you like this episode? What was your favorite part?

Don’t forget we still have some awesome Outlander stuff to give away! Remember that you can comment on each week’s recap to earn more entries!

This swag pack also includes a 2XL Outlander t-shirt with “Real Men Wear Kilts” written on the back along with a tartan bandana and a Summer of Sassenach pin. Good stuff, right? 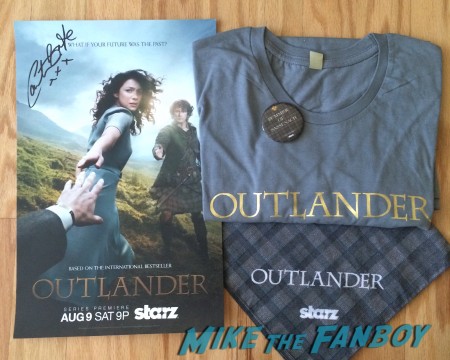 Just use the rafflecopter below to enter! In the comment section, please tell us what’s been your most favorite moment of Outlander so far!

For additional entries, you can tweet (daily if you really want to!) or comment on each week’s re-cap for extra entries! Here’s a link to the first recap of the contest period if you want to maximize your chances.

This giveaway runs until the first of June and is open to US residents only. (Sorry!)