This is it folks! The last episode and now we go into the long dark teatime of the soul known as Droughtlander. But before that we have Jamie to rescue from jail and Young Ian to rescue from the clutches of Geillis/Mrs. Abernathy/Bakra!

A dead Claire is peacefully drowning in the ocean. What?!!

She has a thing about describing her thoughts/feelings during tragic accidents – remember the car wreck from Season 1? So we’re watching her sink into the abyss…

Claire is jostled inside a speeding carriage on the way to Geillis’ for the catfight confrontation. The carriage halts suddenly when they run into eighteenth century traffic — a mob carrying torches and marching like zombies. That’s not suspicious or troubling. Nope. She hops out of her carriage and heads up to the estate on foot.

Meanwhile, Fergus and Marsali have returned to the Inn to find that Claire has been there already and left a note telling them about Jamie’s arrest. Fergus knows exactly what to do.

Back at the mansion, Claire is skulking around the slave quarters calling for Ian. Subtlety thy name is Claire. When she stumbles on a fluffy little pooch eating a couple of dead guys. Lovely. She must be close! Then she’s discovered and grabbed from behind…

Down at the docks, baby faced Captain Leonard is strolling his prize trophy (aka Jamie) to his ship when a bunch of redcoats waylay them. The next thing you know, they’re sitting in the governor’s office (aka Lord John Grey) and Lord John is fully lording over Captain Leonard. Not only does Grey bring ups Leonard’s lack of official paperwork, he also gets in a few jabs at the navy, being an army man himself. Nice to see that’s a tradition with a long history. Since Jamie was not captured at sea, Leonard has no authority to arrest Jamie on land. That’s Grey’s jurisdiction. The Baby Captain is thoroughly routed, Grey wins and Jamie is a free man once again. Huzzah! 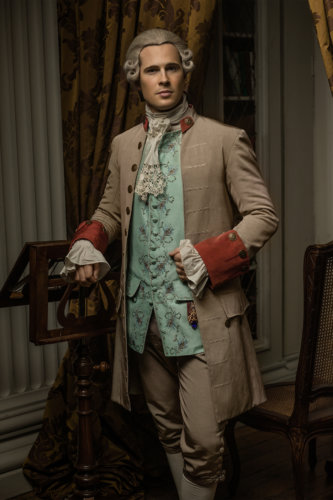 Jamie thanks Grey for his life and they part ways. What? No man hug? Cold, Jamie…cold.

Meanwhile, Claire sneaks into the main house, scouring the place for clues when lo and behold, there stands Geillis playing the wary hostess. They both play innocent and do a merry little dance with words before Geillis loses patience and accuses Claire of purposely stalking her through time in order to stop Geillis’ crusade to free Scotland. Baffled, Claire insists it’s all coincidence and she even want back to the future. Geillis doesn’t believe Claire would leave Jamie nor would she brave the horror of going through the stones. (Geillis only goes through if there’s a ritual sacrifice because she thinks that will keep her safe.) 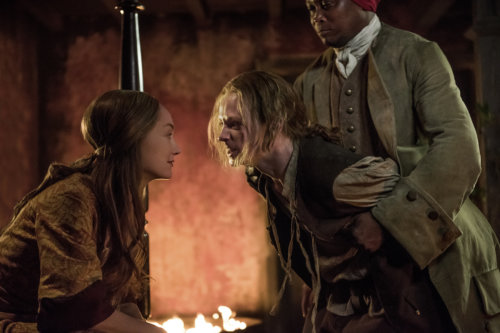 Claire protests that she traveled through the stones by concentrating on someone (no dead bodies needed) and pulls out the photos of Bree to prove she went back to the future to save her baby. A baby that was 200 years old on the day it was born.

Lightbulb for Geillis! According the prophecy, the Scottish King will rise once Bree dies. Geillis has a new plan…bwah ha ha ha…

Suddenly, Geillis is sweet as pie, as she steals a photo of Bree and offers Claire shelter for the night. There’s a really awkward friendship hug. Geillis retires for the night and Claire is left to wait for a servant to show her to a room. All the doors are locked so really Geillis offered Claire a jail cell for the night.

Claire sees a big dude outside and he’s carrying Young Ian! Claire tries to get out and one off the rattles as someone else is trying to break in. Claire grabs a blunt object… and nearly beans Jamie in the head (thankfully she misses) and they head off to find Young Ian. 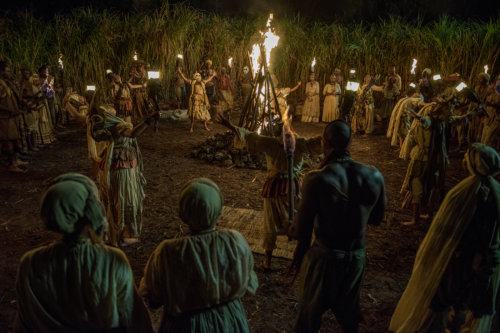 They can hear the drumbeats from the torch-lit mob Claire saw earlier so they head towards the sounds. The mob is performing some kind of ritual, dancing around a fire with torches and Claire has a flashback to the Druid ladies dancing around the stones in Scotland. They’ve got to be close! They’re discovered and grabbed from behind. 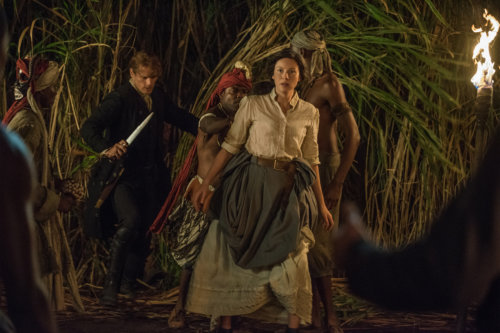 They bravely face the crowd when Mr. Willoughby and Margaret save them?!?! Margaret has quite the reputation as a seer after she kept telling the slaves their fortune. She’s their special guest before she and Willoughby ride off into the sunset to live happily ever after. Ah, love.

Jamie and Claire ask Margaret if she can tell them where Ian is, and in the midst of some odd ramblings where she mentions the hare (remember him at the aftermath of Culloden) and the bird (remember Claire staring at it out the winder in Boston) and finally says the name Abandawe again. Claire knows that’s where they need to go but how they do find it?

Suddenly Margaret’s brother, Archie, shows up and tries to force her back to Rose Hill but Mr. Willoughby’s having none of that and violently attacks Archie to save his fair (loony) damsel. While the natives upgrade from a chicken sacrifice to a human sacrifice, Jamie and Claire find one of the revelers who points them in the right direction of the Abandwe with a dire warning. 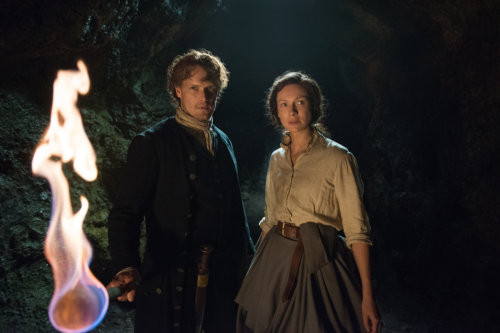 Claire pieces together that the cave, where people go in, but don’t come out, must be another time portal like the standing stones. Ian is there, so they have no choice but to go.

The cave sits beneath a circle of stones and, inside the cave, Claire hears the humming stones. Yep, there’s a portal down here so she needs to be careful about what she touches because she’s not sure she could come back to Jamie again. Claire figures Geillis is going back to the future to kill Bree since Geillis is crazy to get a Scottish King on the throne.

They find Geillis drawing pentagrams with gem stones and Bree’s stolen picture while Ian is trussed up like a turkey and Geillis’s bodyguard slave, Hercules, guards their bodies. Jamie keeps Hercules occupied by getting his rather lovely *ss handed to him, so Claire goes to stop Geillis.

Claire realizes the pool inside the cave is the portal and she has to stop Geillis from jumping in. She’s trying to reason with Geillis who wants Bree’s life in return for saving Claire at the pyre. Not a surprise, but Claire doesn’t agree.

Just as Geillis is about to dive into the pool, Jamie knocks out Hercules and Claire hacks Geillis’ head off. No seriously, she hacks it off. So Geillis is really dead this time. Claire looks at Geillis’ head and flashes back to Boston and Joe’s office when he was messing around with the bones of a 200 year old woman who died of violence in a Caribbean cave. That means….yikes!

Back on the Artemis, it appears Claire is over her trauma and Jamie is getting ready to shave for the first time in a few days. However Claire is feeling frisky so asks him not to shave, which prompts Jamie to tell her some of the very naughty thoughts he’s had about her and what he’d like to do to her once they’re alone with a large bed.
Claire says ‘why wait’ and it doesn’t take much to convince Jamie.

A giant storm batters the Artemis and Claire gets washed overboard! Now we’re back to Claire in the water, peacefully drowning. Jamie does a perfect imitation of Aquaman and dives in after her, pulling her onto some ship debris with him (see Rose, Jack totally could have been on that door with you). Although she’s so limp, he’s convinced he’s already lost her. Nooooooo!

Jamie wakes up on a beach with a little girl poking him with a stick. He drags himself a few feet over to Claire’s body. He’s overcome with grief, kissing her on the cheek and BAM! Claire starts breathing again! That’s some kiss there! He really is the King of Men.

They have a touching moment and then a family approaches them. Jamie asks about the Artemis and apparently it washed up on the same shore only 4 miles away and the villagers were all down there helping them out. They ask which island they’re on and the local dude laughs and tells them it’s no island. They’re in the colony of Georgia, aka The New World, aka a very young, pre-revolution America.

Alicia: Well there’s an ending for you! Jamie’s saved from jail, Young Ian is found and saved, Claire kills Geillis, we said goodbye to John Grey – again, Mr. Willoughby is off with his lady love, and now they’re an entire ocean away from Scotland in America. And that was only an hour!

Erica: A nice big ending for the season! Everybody got a moment and we can all breath again!

Alicia: Kind of admit, my crush on the television version of John Grey grew a little with this episode when he was being all authoritative. I mean it’s firmly established for the book version, but this one is capturing my heart as well.

Erica: He was awesome in that scene. It’s good to see John not puppy-dogging Jamie, but being his own strong man. Albeit with puppy eyes towards Jamie.

Alicia: Ding-dong, the witch is dead! I mean kind of sad because Lotte played Geillis so well! But that is one person who proves the saying ‘with friends like these, who needs enemies?’

Erica: I thought Geillis was okay in the books, but Lotte gave her such personality. She’s such a fun villain. I’ll miss her special brand of crazy.

Erica: The change in the prophecy helped give a really strong justification for Geillis’ death — to save Bree. I still haven’t warmed up to Bree so I hope she proves worthy of the loss!

Alicia:Agreed. I didn’t mind some these changes especially around Mr. Willoughby and the prophecy. I think they did a good job ending this book and leading to Drums of Autumn. Excited to see the next great location – Fraser’s Ridge!

Erica: I do like TV Willoughby much, much better than book Willoughby so kudos to the writers for that!

Erica: Did I miss it or did they skip the part about Joe Abernathy’s possible ancestor? Perhaps it was too many coincidences for one hour of TV.

Alicia:No, they rolled him into Temeraire’s character in a way. It was Joe’s ancestor who was aboard the ship with them at some point and they allowed him to take Temeraire to an island with escaped slaves.

That’s it for this season! What did you all think? Are you satisfied with the way this season shaped up? Any favorite moments, any that really didn’t do it for you? We’ve got a Droughtlander looming people we need to drag these discussions out to get us through!