Starz is marathoning season 2 of Outlander today so we thought we’d recap our top moments from season 2…so far!

Hey, it’s something to pass the time until the 90-minute season finale next week and then, well, we’ll probably have to re-do the whole list! Lol! 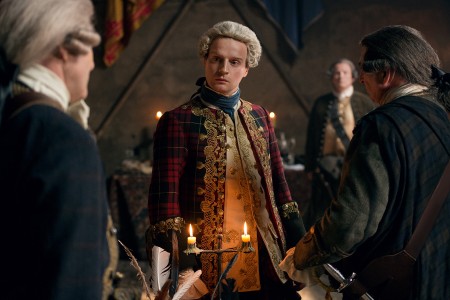 Between his “God and my right” delusions, his identifiable catchphrase and a touching-people-on-the-cheek fetish, Bonnie Prince Charlie was quite the character and Andrew Gower played him to perfection. Of course, he was also helped by his red plaid outfit which made him look like a giant box of delicious shortbread.

(Also, for those who may not know, the original “Skye Boat” song is actually about Prince Charles’ escape to the Isle of Skye after the defeat of Culloden. You can read the original words here. The version for the show was adapted from a poem by Robert Louis Stevenson.)

A Feast for the Eyes in Paris! 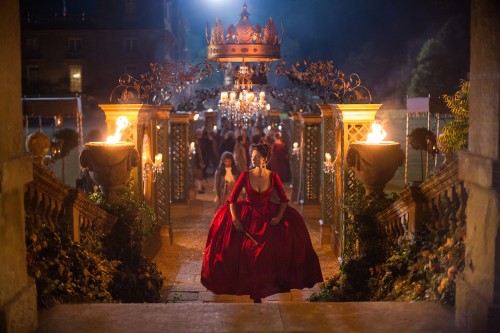 No, we’re not just talking about Stanley Weber (aka Comte Ste. Germain). Eighteenth century Paris was mind-boggling sumptuous and decadent. OK, Claire’s outfits were a wee bit off period, but she’s a time traveler so it’s allowed! Still, they were GORGEOUS! The other ladies were spot on to period and Louise’s outfits…ugh…want to own them all!

The sets for Paris were equally as stunning. The gardens, the building facades, the furniture, the libraries….just stunning. The design teams did an amazing job with the colors and feel to let us know we weren’t in Scotland anymore. Gilded cages never looked so fun. 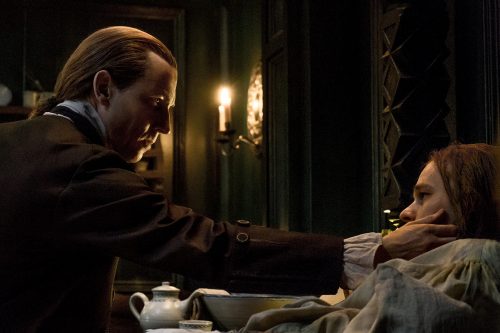 Is it sick to say a scene comes alive when he’s in it? Maybe. But a great villain makes our heroes even greater and who is a better villain than BJR? He is just a pure psychopath and it’s fascinating because he knows it, admits it and owns it. But Black Jack isn’t a one-note baddie.

We got to see a glimpse of Black Jack’s humanity through his tenderness for his brother, Alex, and his concern that he’ll be evil to Mary. Of course, in the next breath, he’s reminding everyone that he’s a sadist by pummeling his brother’s dead body…

Shocking and so in character. Tobias is soooooo good at playing the depth of violence in this character even when he’s absolutely still. 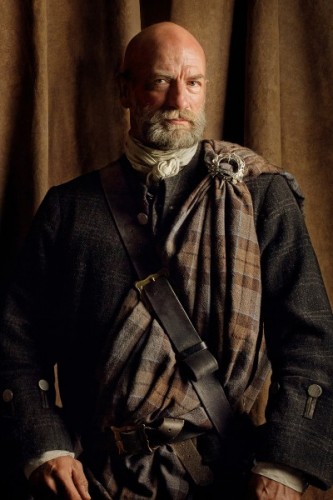 Dougal MacKenzie spent years planning a long game to take over Clan MacKenzie and win the favor of a reigning Stewart King. So what if he had to box out his nephew, Jamie, to guarantee his position? (Remember the Gathering last season?)

But in a example of sweet, sweet karma biting you in the ass, instead, Jamie (the reluctant Jacobite) gets in good with Prince Charlie and Dougal is banished from court AND clan. This proud Highland warrior brought low on so many counts.

The Surprise Opening for the Season 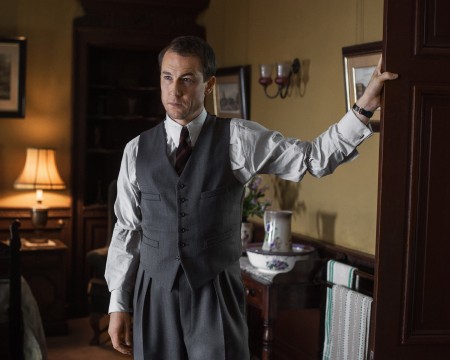 While the show remains true to the books, the writers can still throw us a curveball. Book readers expected that the season may not open in 1744 Paris, but we could not have guessed that we’d open in 1948 Inverness! Um…what?

Claire’s return and her reunion with Frank are glossed over in the books so it was nice to see them masterfully fleshed out. The heartbreaking season premiere sets up a heartbreaking final next week. Are we ready for this? Gulp! 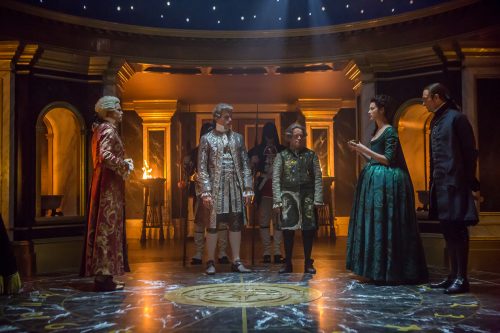 There is a whole play’s worth of drama in this one scene – death, sex, trickery, admissions of guilt, snakes, poison and banishment. What a day!

Claire cannot catch a break from this witchcraft nonsense. At least this time it’s in one of the most stunning sets of the season and she’s brought in as La Dame Blanche who uses her powers for good. A ‘good’ witch (?). Most of all, though, we had to say farewell to the best sneer on TV. R.I.P. Comte!

The Bromance is Over 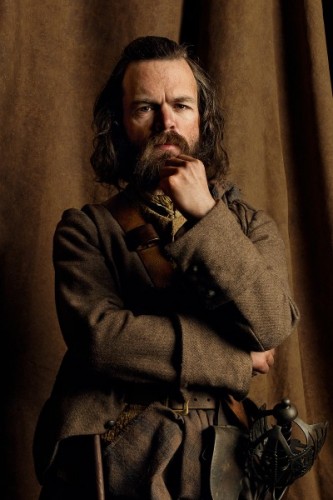 How will Rupert get along without crazy, loveable Angus? How will we? Why did this season make us cry so much?! Watching Angus fuss over Rupert, keeping watch to ensure Rupert will live, and then to die in such a horrific way…gut wrenching. Sniff! 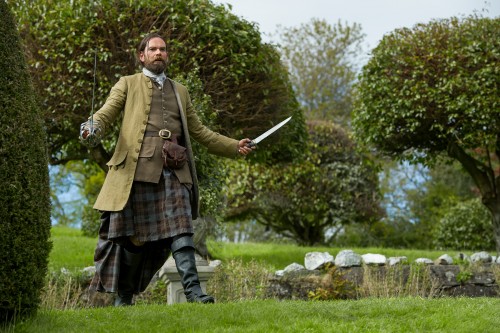 Where do we begin? Murtagh yelling at Parisians in the gardens. Murtagh wearing Parisian fashion. Murtagh promising Claire that he’ll look after Jamie “always.” Murtagh and Fergus. Murtagh offering to marry Mary. Murtagh beheading the Duke of Sandringham and laying it at Claire’s and Mary’s feet. Ah, it was great to get so much more Murtagh this season!

You Gotta Have Faith 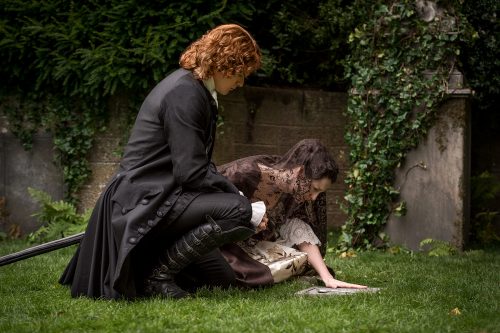 We all knew Caitriona could act, but damn, she can REALLY act. In the episode dedicated to the miscarriage of the Fraser’s baby, Faith, Caitriona was so heartbreaking, so brutally honest and so raw. It’s a performance you can’t take your eyes from, but you’re not quite sure you can ever sit through it again. Brava! 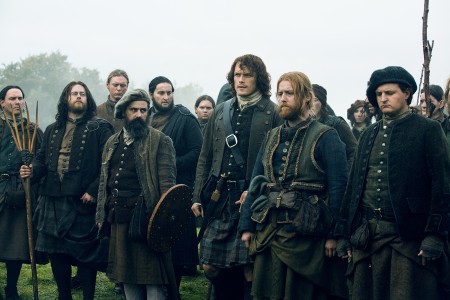 Ok no, we haven’t seen it yet, but we know what’s coming since the first scene of the season. How will it happen? Will we see the Battle of Culloden? Will we see the child again (we got a brief glimpse of her earlier in the season)? Will we see Black Jack Randall die as Claire told him he would? Will we see anyone else die? What will Dougal do now that he’s on the outs and Jamie basically has everything he’s ever wanted (including Claire)?

And let’s not forget some of the fantastic new characters we had this season! 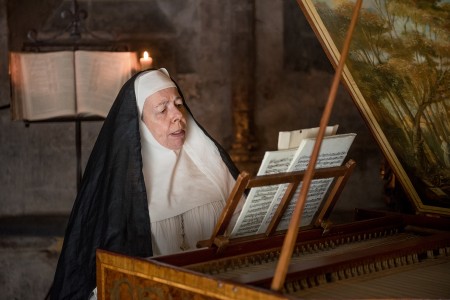 How can we not pay homage to Mother Hildegarde and her little dog? Frances de la Tour added such depth to the scenes at the hospital. 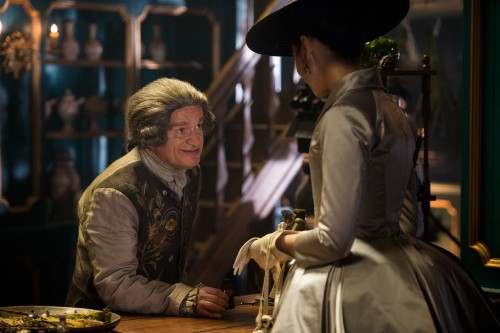 Friend? Foe? Both? Ultimately we’re convinced he’s friend but there were definite moments when you got the feeling there was something ‘off’ with him.

So what were your favorite moments of the season (so far)? Comment below and let us know!