MTF reader and blogger himself James has just sent over this great report from the London OZ: The Great and Powerful premiere! James did a great recap of the day and has some awesome photos to boot!

Hopefully, this won’t be the last time we hear from James here at MTF! 🙂

I know I say this a lot, but it’s so interesting to see how things are in different parts of the world! People who are nice in one are rushed at another etc… You just never know!

Check out James full report after the jump!

Ever since it was announced at the start of the year I’ve been looking forward to this premiere for one reason only, Meg Griffin! aka Mila Kunis. However, with a pretty amazing cast all turning up, I had a pessimistic gut feeling in the week leading up to it.

Anyways, the carpet looked amazing. I’m not sure how much money Disney put into this setup, but it’s one of the best ones I’ve seen. Yellow brick road carpet, an awesome stage for interviews, and a weirdly large number of artificial trees. Another nice feature was the relatively early start of the premiere; rather than still being in the cold at 7.30 in Leicester Square, arrivals had wrapped by 6.45; every little helps!

Arrivals started at about 5.40, and we were opposite the drop offs. First car pulls up, and out gets Michelle Williams!  Star of films including My Week With Marilyn, Brokeback Mountain, Blue Valentine (all three of which she’s been Oscar nominated), Shutter Island & Wendy and Lucy, not to mention TV series Dawson Creek, Michelle was someone I really wanted to meet, especially after missing her at the 2012 BAFTAs (seriously, coming over at the same time as Daniel Radcliffe!) She came right over, and was really friendly. She kindly signed my Oz promo picture, and signed & dedicated my autograph book. Awesome start! 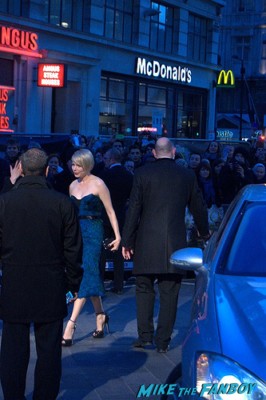 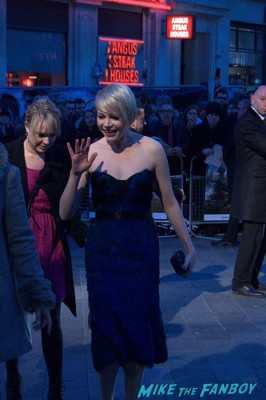 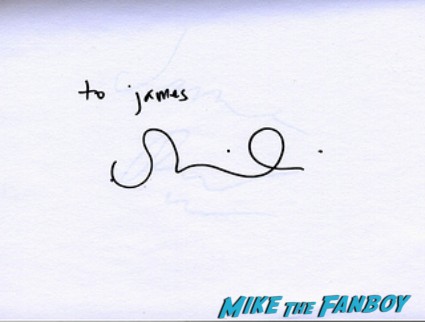 Zach Braff arrives next, and signs loads, but misses our spot before being taken to see the press. Of all the 5 cast, he’s the person I was least worried about as I met him during his theatre run last April (was it April? I think so!).

Next arrival, and it’s James Franco! He’s going off and signing on the opposite side. Have heard he’s great though, so I’ve no real fear hat he won’t be over before long. Oh wow, Sam Raimi‘s appeared out of nowhere! He’s the director of the film, and has also directed the Evil Dead and Spiderman film series. Somehow left my Spiderman DVD sleeve at home, gutted! Sam was really chatty; he kindly signed and dedicated an index card for me, and posed for a photo. 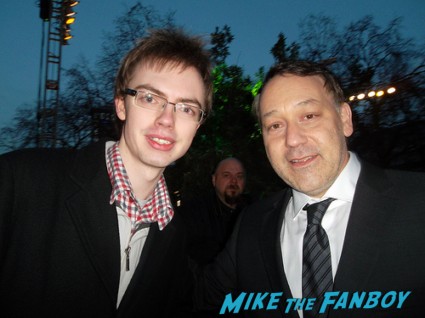 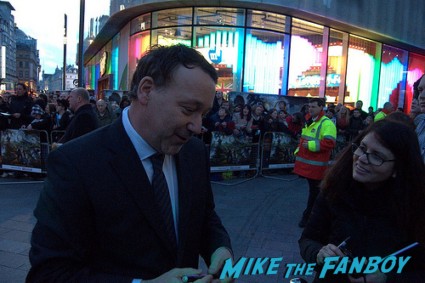 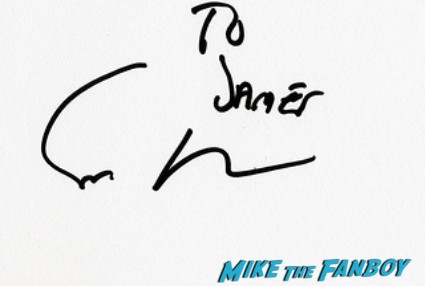 Another car, and it’s Rachel Weisz! The one I least expected to meet (when she did theatre at the Donmar Warehouse, she refused to sign for me 3 or 4 times, I didn’t expect much different here). But she’s signing right opposite me, maybe she’ll come over! She’s known for her roles in films including The Mummy, About A Boy, Chain Reaction, Enemy at the Gates, and of course her Oscar winning performance in the Constant Gardner. She’s coming over, and seems surprisingly happy! She kindly signed and dedicated my autograph book, and signed my Oz promo picture. Brilliant. 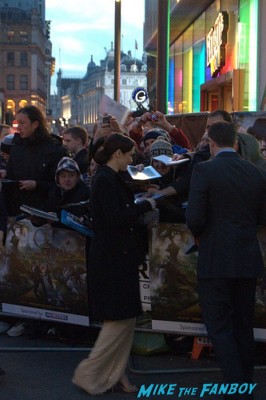 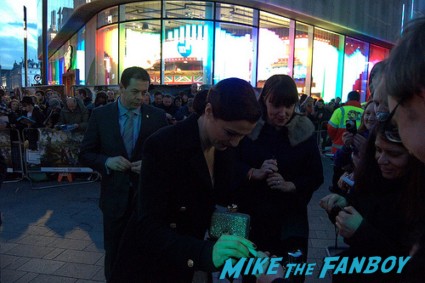 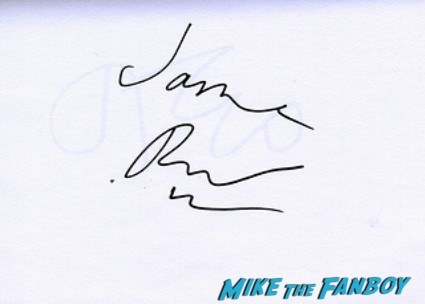 James has been taken past us for press interviews, nightmare. A couple of minutes later the last car pulls up, and out gets Mila Kunis! Yipee. Oh, she’s been taken straight up the carpet to be interviewed. Not looking good. I may have met two of the stars and the director, but if Mila wasn’t here I may well have not made the trip out (that’s probably a lie actually). Can only hope she’ll be back. In the meantime, James Franco‘s being brought back from press to sign for us, awesome! Do I need to say who he is? Go on then; star of films including Sam Raimi‘s Spiderman trilogy, Milk, and 127 Hours (another Oscar nominee!), he kindly signs my autograph book and Oz promo picture, and even poses for a photo with me. He was proper awesome, and I’m pretty sure he signed the most of the cast. 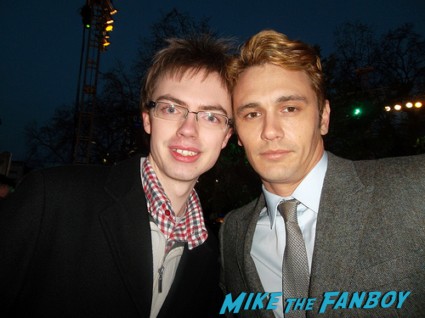 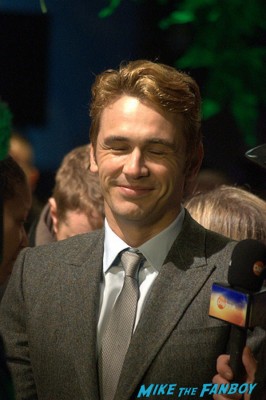 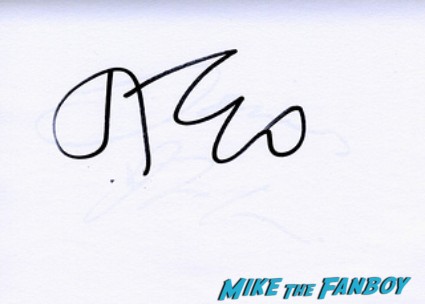 Ooo, Mila Kunis is being interviewed at the camera closest to us now. A lot of us join the rather frantic PA-attention-grabbing attempts, and whilst that doesn’t work, Mila sees us and motions she’ll come over after this interview. Yipee! and true to her word, over she comes!

Now, I had a big dilemma; I’ve a Family Guy DVD signed beautifully by Seth MacFarlane, possibly the best signature I’ve ever seen from him. I don’t know much at this point of Mila’s signature, I’d only seen ones from the LA Oz premiere, and it was shocking. So as to not ruin the DVD, I got my autograph book signed and dedicated, with what was actually a pretty nice signature (in relative terms), but not good enough for me to get the DVD signed; I mean, Seth’s the creator and proper star, I’ll leave it with just him. I ask for a photo with, my friend Patricia asks if I can have a photo too, and before she has a chance to answer, the PA says no. Boo. I’m not sure she’d have said yes, but seriously, let the stars use their own brains!

However, major thanks to Ian for getting this photo, I’m well chuffed to have one of me and Meg Griffin in the same shot. 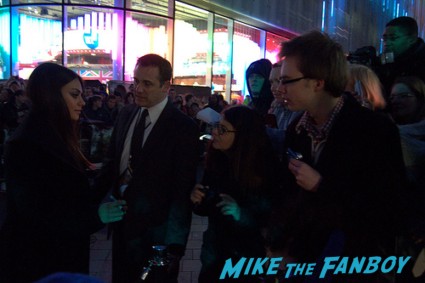 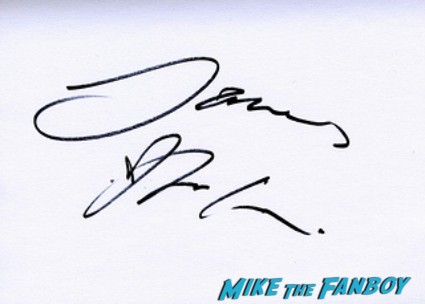 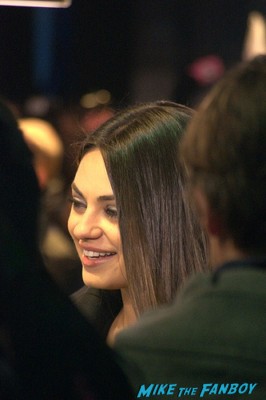 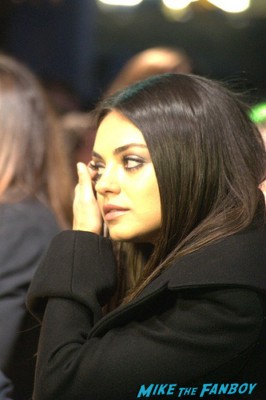 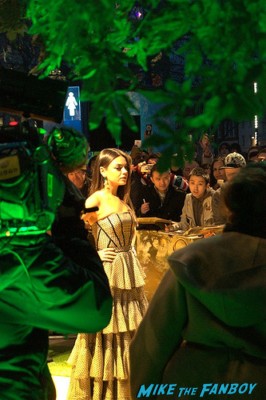 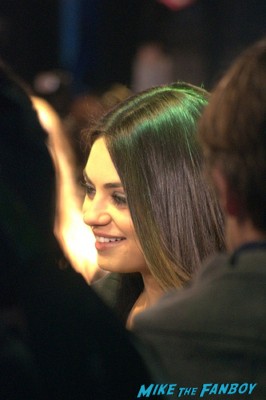 Well chuffed, come to a premiere and I’ve met the director and all the main cast before the doors to the cinema are even open! Now the fun starts in trying to spot some of the celebrity guests. I’m not as good at remembering these bits in great detail, so I’ll try to keep it short. Before leaving home I’d seen a supposed guestlist, and one name stuck out for me, Dakota Blue Richards. First spotted was Eve Myles, known (well, to me at least) for playing Gwen Cooper in Doctor Who and Torchwood; she kindly signed an index card for me. 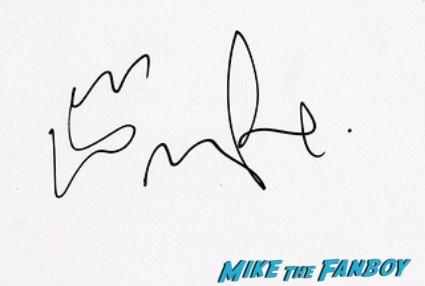 A couple of minutes later, and there’s Dakota! Woop! She happily comes over and signs an index card for me, and poses for a photo. Is it bad I like Skins? Probably, but it’s a guilty pleasure. Like Come Dine With Me, just that has less pretty people in it. 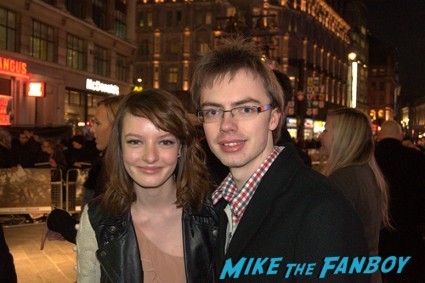 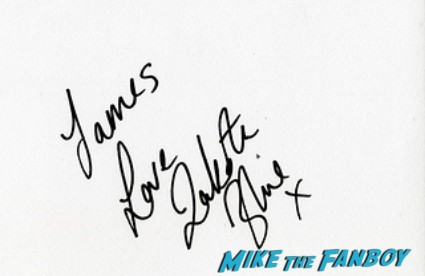 Next (and, well, last) was The Saturdays singer, Una Healy. Whilst everyone’s going a bit gaga for her, I’m much more interested in meeting her husband, England rugby player Ben Foden. Not often I get to meet a rugby player despite following it pretty closely. Una’s signing away, and Ben’s just standing watching. He finally sees me calling him and happily comes over to sign an index card and pose for a photo. Great! Una comes over too, and signs an index card and poses for a photo. I actually happened to meet Una on Monday too but couldn’t get a photo, so it was nice to see her again 72 hours later! 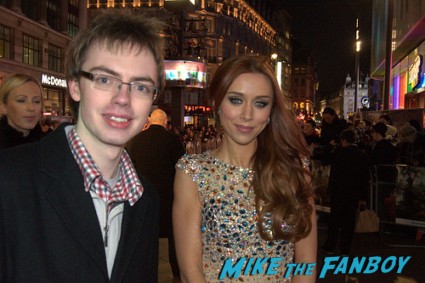 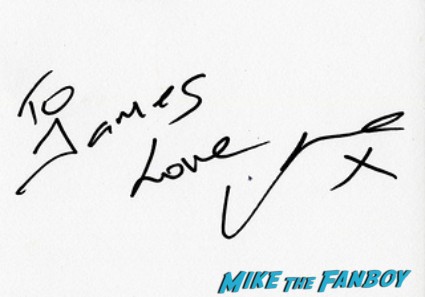 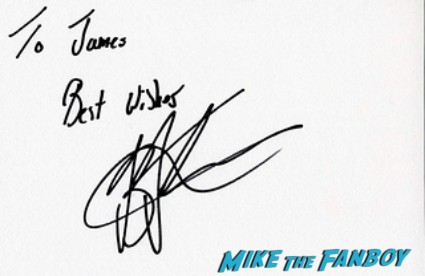 and that, was that. Andy Serkis arrived very late, and didn’t come over to sign where I was sadly. another premiere, another time Gollum turns up late. One day I’ll meet him!! Thanks to my awesome friends for the company, to Ian & Patricia for taking my pictures, to Donna (who’s website is here) for letting me use some of her photos when I got too excited to take any, or where mine just came out blurry), and specially to Ian for the awesome Oz promo pictures, love them!

Overall, a fantastic evening. I think this is only the third premiere I’ve been to where I’ve managed to get all the principle cast that have attended (after Men in Black 3 with Will Smith, Josh Brolin, Nicole Scherzinger, Emma Thompson and Alice Eve, and Rock of Ages with Tom Cruise, Mary J Blige, Julianne Hough, Diego Bonieta, Paul Giamatti and Russell Brand). Although the calibre of cast was probably better here, the atmosphere at Rock of Ages will never be beaten. But this is certainly now in my top 5 premieres!

Check out James blog to find out more from his celebrity adventures!